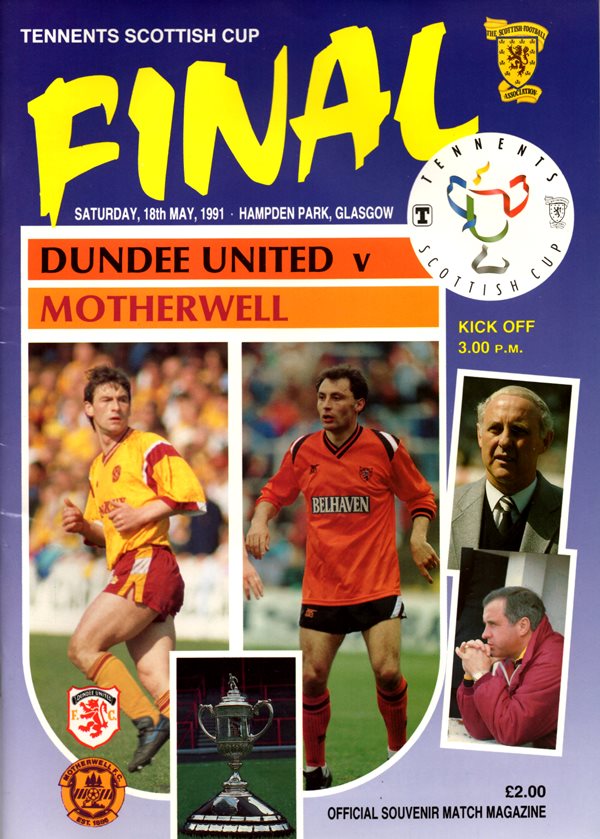 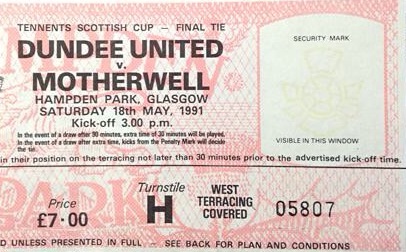 The family Cup final was the label affixed to this Cup final with brother Tommy leading his side into battle against brother Jim and what a match it turned out to be! In the early stages of the match we were certainly the dominant side and took early control. As early as the seventh minute we might have been two up. Just two minutes had elapsed when Jim Mclnally sent Hamish French, and although the former Keith striker ran on to score, a Linesman's flag had appeared against Darren Jackson for off-side and the goal was chalked off. Further evidence that fortune at Hampden never seems to favour us came in the sixth minute. Arnott fouled Freddy Van Der Hoorn in the centre circle. The ball was played quickly to Hamish French and Nijholt caught Hamish French on the turn and conceded another free-kick. The ball was rolled to Freddy Van Der Hoorn whose 25 yarder almost defied the laws of nature by striking the inside of the post and somehow went out for a goalkick!

Gradually Motherwell forced their way into the match, but after a spell of end to end stuff, the match hit a lull. In fact, the game's first goal came out of the blue. lain Ferguson gathered the ball 25 yards out and knocked it wide to Griffin on the left and by the time his cross, which was slightly deflected off Jim Mclnally, arrived in the box, Iain Ferguson had arrived to head the ball into the top corner, time — 32 minutes. How the name Ferguson keeps haunting us in finals. The self same Iain scored Rangers winner in the 1984/85 League Cup final and, of course, Ian Ferguson, now of Rangers, scored St Mirren's winner in the 1987 Scottish Cup final. As the first half came to a close, Jim Mclnally, shot over so Motherwell remained ahead by that single goal.

We re-started with John O'Neil on for Duncan Ferguson. Shortly afterwards Ally Maxwell was badly injured in an aerial challenge with John Clark, but was able to continue after treatment, though in obvious pain. Ten minutes into the half, we drew level. Dave Bowman, who'd made ground down the right, hit a 25 yarder that kept low and whizzed into the far post netting past the injured 'keeper. Our joy lasted a mere three minutes. A Cooper free-kick was headed on by John Clark and Phil O'Donnell got in a header to beat Alan Main.
Things looked even blacker in the 65th minute when Ian Angus steered home a shot into the far corner from the edge of the box. Two minutes later, however, Dave Bowman crossed from deep on the right and John O'Neil rose to head well past Maxwell from six yards. What a moment he chose to score his first competitive goal for the club. This marked an all-out assault on Motherwell's goal. The pressure was intense, and our cause looked lost until the last minute. Alan Main belted the ball upfield. It bounced once beating everyone and as the ball dropped on the edge of the box, Darren Jackson ran in to head past the advancing Maxwell and into the empty net. We almost won the match before the final whistle, but Maurice Malpas's shot was off-target.

However, things were looking good now, but we received an early and crucial set-back four minutes into extra-time. A Cooper corner found its way to Steve Kirk who headed home with a back-post header. Nijholt became the first player to be booked for a tackle on McKinlay in 111 minutes. In a frantic effort to save the game in the dying minutes with Maxwell producing a flying save to deny Maurice Malpas and then John Clark shot past. It may have been one of the most memorable Cup finals, but that was of little consolation to the United players or any of the huge number of Tannadice fans who had just witnessed the sixth Scottish Cup final defeat in 17 years! The one honour to come our way was the Man of the Match award which was deservedly picked up by Dave Bowman. The sting in the tail, however, was to come later when it was learnt that four United players — John Clark, Darren Jackson, Jim Mclnally and Freddy Van Der Hoom had been red-carded after the match!