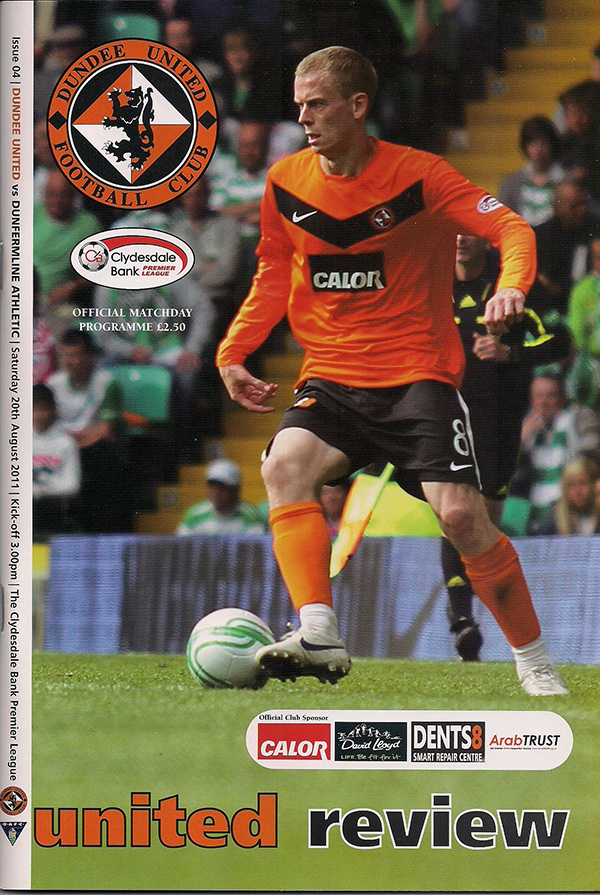 Newly-promoted Dunfermline Athletic were the visitors at Tannadice in United’s third home game of the new season. With Peter Houston’s side still looking for their first home win and following on from a 5-1 drubbing at Parkhead the previous week the pressure was on United to get back to winning ways. Houston reacted to the heavy defeat at the hands of Celtic by making two changes to his starting 11: in came Barry Douglas and new signing Gavin Gunning in place of Keith Watson and Scott Allan. It was also a return to Tannadice for former United striker Jim McIntyre who was now manager of Dunfermline.

Dunfermline won the pre-match toss which saw United shooting down the slope towards the Eddie Thompson Stand in the first half. Willo Flood was the first to have a shot on goal but his 30 yard strike was straight at Paul Gallacher in the Dunfermline goal. Barry Douglas and Martin Hardie both headed wide of the target for their respective sides but the latter was the away side’s only real effort on goal during the first half. The Pars were struggling to settle into the match and it was United who continued to do all the pressing: Johnny Russell almost found himself through on goal after good link-up play between Daly and Robertson but the Dunfermline defence managed to half clear the danger only for the ball to be crossed back into the box by Garry Kenneth but Barry Douglas’ header looped over the bar. Daly was next to go close: heading John Rankin’s delivery across the face of goal but the ball drifted harmlessly wide of Gallacher’s far post. Daly went close again when Rankin hit the by-line a played a low ball to the near post where Gallacher did well to block Daly’s shot on goal. From the resulting corner Gallacher was forced to punch Willo Flood’s awkward cross out to the edge of his penalty area where Scott Robertson was waiting to fire in a wicked half volley which the Dunfermline goalkeeper managed to parry. It was all one way traffic at Tannadice and United went close yet again shortly before half-time when John Rankin met Sean Dillon’s cross with a powerful header which bounced just wide of the post.

United continued to force the issue after the break and Johnny Russell really should have done better when a Sean Dillon cross found the young striker in space in the box. Russell controlled the ball well but his right footed effort on the turn from 14 yards was high and wide of the target. Dunfermline’s defence was looking increasingly vulnerable and they were cut open again by a simple cross into the box which caused havoc: neither Daly nor Russell could manage to find enough space to get a shot away but Rankin took the ball onto his right food before curling the ball just wide of the post from around 12 yards. Dunfermline’s first real effort on the United goal came from a long-range free-kick but set-piece expert Martin Hardie could only fire wide of the target. The Pars were coming more into the game in the closing stages but even then it was a shock when the East End Park side took the lead in the 85th minute: Joe Cardle’s cross from out wide on the left fell nicely for Paul Burns who was arriving at the edge of the box and his low shot beat Dušan Perniš to give Dunfermline a lead that it can only be said they did not deserve. United went close in the dying seconds but Gavin Gunning’s bullet header from a Willo Flood corner was wide of the target and the match finished 1-0 to Dunfermline: a bitterly disappointing result considering the balance of play.

To say the least, last week's defeat by Celtic, and particularly the magnitude of it was disappointing to say the least. But despite the 5-1 scoreline, their keeper Lukasz Zaluska has named man of the match and that tells you something. We went there and had a go, but after the way we lost the goals there was plenty of work to be done defensively on the training ground this week. You only have to analyse the goals we gave away with two coming from corners. At the first goal, our goalkeeper should have done better and they eventually get a comer because he's not concentrating enough. So, that was a cheap goal to give away. However, we got back into it with a decent goal, only to quickly go behind again from another corner which is normally a strength of ours. For a spell in the second half I thought we would get level again because of the number of crosses we were putting into the box. And had we squared the game at 2-2, then I think their fans would've got edgy. But they counter-attacked us again to lake it 3-1. So, it was disappointing and really poor defensively for us. We looked a threat at times in an attacking ise, but I'm disappointed to lose to a scoreline that flattered them. However, all credit to Celtic for being so clinical in front of goal.

The previous week we were held by St Mirren at Tannadice, but the biggest disappointment was the terrible injury to Scott Severin. He has been a bit unlucky with injuries and a wholehearted type of player. There was no malice in the tackle - it was just two players going in for the ball. It's too early to say what the long term prognosis is, but Seve is a big character and will certainly try to get back. Whilst I felt that we should have gone on and won the game after Nigel Hassilbaink was sent off. In the first half we didn't do well enough and I blasted the players at half-time. Indeed, I was really disappointed with the opening 45 minutes, but we were magnificent in the second half. That, of course, begs the question, why we didn't start the first half in the same manner. Certainly we can't afford that against Dunfermline this afternoon and particularly as far as set pieces are concerned. We have found out in the past what Martin Hardie can do from set pieces and we all saw what he is capable of the other week when he scored a cracker against ICT. So it is something I will be warning the players about. You always preach players not to give away soft free-kicks around the box, but when a team has someone of that quality able to take them then it is even more vital. Dunfermline have started well. People criticised them for their performance in the opening game with St Mirren, but what they forgot is they picked up a point. I watched that game and thought there were a few nerves, which is totally understandable because it was their first match back up. I have nothing but admiration for the Job their manager Jim Mclntyre and his assistant Gerry McCabe have done at East End Park. They won the First Division, which is a notoriously hard league to get out of, and are now doing well in the SPL. But having had all their league games watched, we know how tough it is going to be. And patience will be the name of the game because they will come here to make it difficult for us, but hopefully our preparations will pay off.