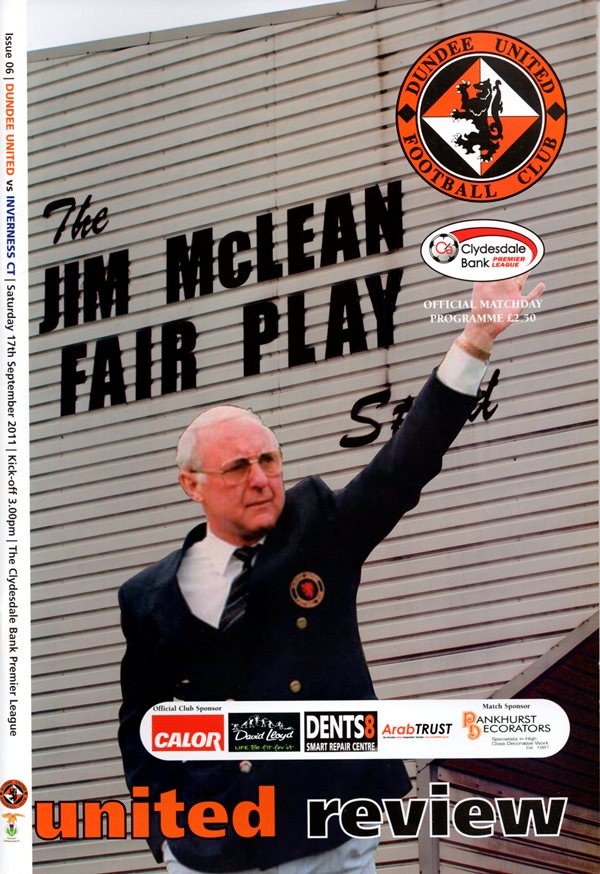 It was a big day a Tannadice with Dundee United legend Jim McLean present for the official renaming of the Fair Play Stand which would now be known was ‘The Jim McLean Fair Play Stand’. Normally given to away supporters, the stand was for this match only opened for United fans to celebrate the renaming with the small clutch of travelling Inverness fans moved to the Jerry Kerr Stand. On the playing side of things United were still looking for their first home win of the season following two draws and two defeats in their opening four games at Tannadice. Peter Houston made one change to his starting line-up from the previous week’s disappointing 1-0 defeat at home to Rangers: Johnny Russell suspended following his sending off in that match with Ryan Dow making his first start of the season in his place. Club captain Jon Daly who had missed the previous two matches through injuries made a return to the substitutes bench.

Inverness were the first to have a shot on goal: in-form striker Gregory Tade trying to beat Dusan Pernis at his near post with a first time shot but the Slovakian goalkeeper was equal to his effort. Tade was making himself a nuisance for the United defence early on and almost provided an assist for the visitors: whipping a brilliant ball into the box but Andrew Shinnie flashed his header just wide of the post. Despite their early pressure, Inverness went behind in the 13th minute: Scott Robertson threading an inch perfect ball through for Lauri Dalla Valle to control and fire his shot across the goalkeeper and into the back of the net, the on-loan Finnish striker’s first goal for the club. However Inverness were level almost immediately, Andrew Shinnie playing the ball across the face of goal and Nick Ross managed to sneak in front of Paul Dixon to prod the ball over the line. United’s defence were looking very vulnerable and Pernis was called into action again when Keith Watson gave the ball away in a dangerous area allowing David Davis to race through on goal but the United goalkeeper blocked his shot at his near post. Lauri Dalla Valle went close to grabbing his second goal of the game when a quick free-kick taken by Scott Robertson caught out the Inverness defence allowing the Finnish striker to race through on goal but his effort from a tight angle was smothered by Ryan Esson in the visitors’ goal. Danny Swanson was next to go close when he fired a low shot across the face of the goal and just wide of Esson’s far post from inside the box. United’s number 10 wasn’t to be denied for long though: a long ball up the field from John Rankin was chested down by Danny Swanson who had beaten the flat-footed Román Golobart to the ball. Swanson cleverly lofted the ball over the head of the advancing Ryan Esson before watching it bounce over the line: 2-1 United in the 43rd minute.

Into the second half and Danny Swanson continued to threaten the Inverness defence: stinging the palms of Ryan Esson with a powerful drive from the edge of the box. Esson was called into action again when Gavin Gunning hit an ambitious 40 yard drive which was destined for the Inverness goalkeeper’s top right-hand corner but he did well to tip the ball wide for a corner to United. Gregory Tade – who had been a handful for the United defence all afternoon – went close to bringing the Highlanders level when he raced clear of Gavin Gunning but the big French striker just overran the ball and couldn’t manage to squeeze the ball past Dusan Pernis from a very tight angle. On 69 minutes Jon Daly made his return to action following a few weeks out through injury, coming off the bench to replace Ryan Dow and the skipper had an instant impact. Paul Dixon raced down the left-wing and his cross took a slight deflection off the head of an Inverness defender before Jon Daly met the ball with a powerful downwards header from 6 yards which beat the despairing Ryan Esson at his left-hand upright. Inverness went on to squander a few half chances with Tansey and Andrew Shinnie both firing efforts over the bar in the closing minutes but the match finished 3-1 to United: a deserved victory for Peter Houston’s men and the Terrors’ first home win of the season. 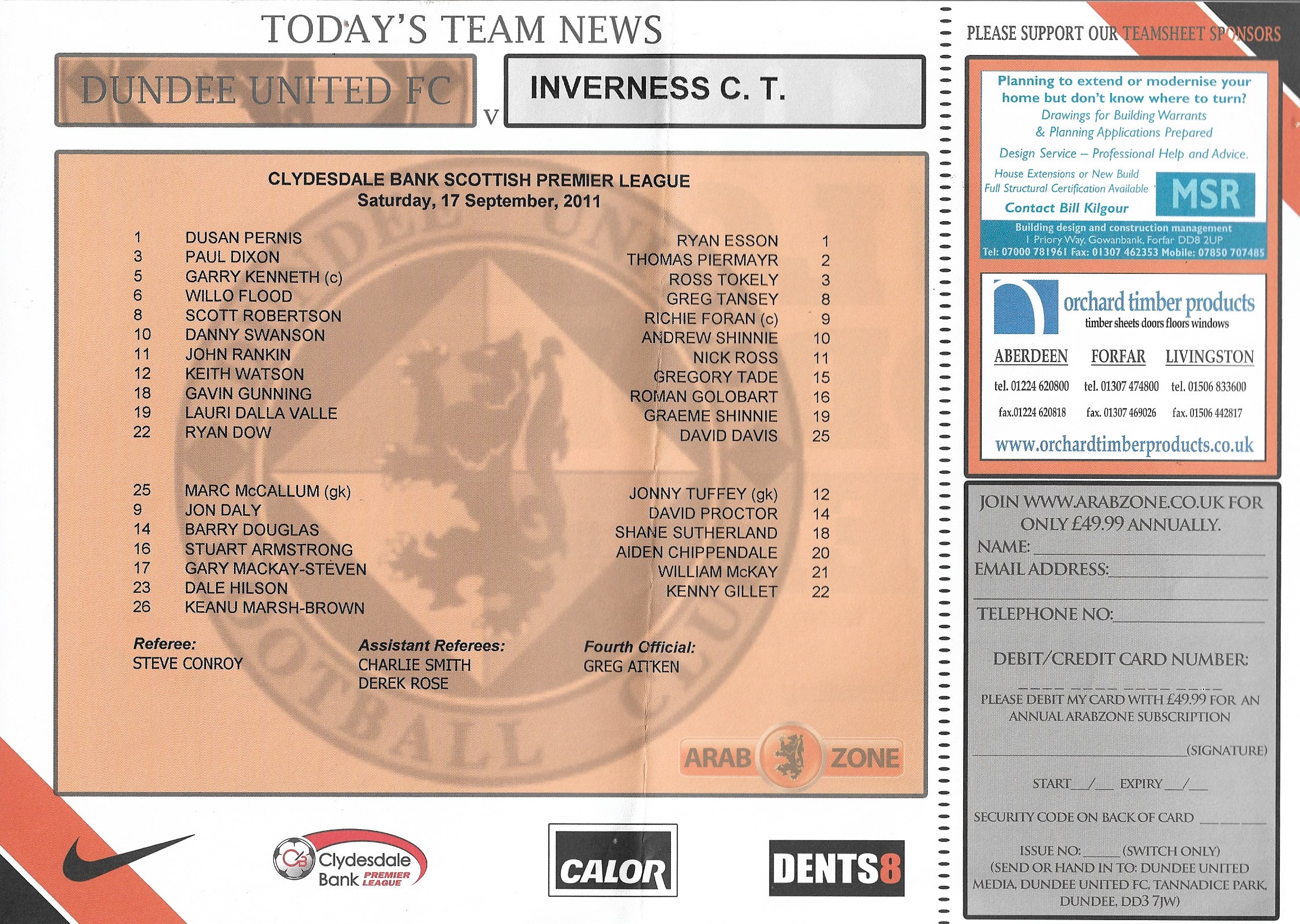 For the second successive Saturday, we are back at Tannadice and hopefully, we'll enjoy better luck than last week when going down so narrowly to Rangers. Yes, I know the game turned on the dismissal of Johnny Russell and on that issue I have no grounds for complaint. There is no place in the game for anyone even attempting to put their head on another player's head. However, I feel very differently about the penalty we were denied prior to going down to ten men. Having watched it several times, there is no doubt in my mind that when Danny Swanson was brought down in the box, it was a stonewall penalty kick. And it was very disappointing not to get a penalty, never mind Danny to be booked. Those incidents made it more difficult for us, but despite the defeat, I drew plenty of positives, because I thought we saw the real Dundee United. First half we bossed the game and dominated and even after Johnny was sent off created the greater number of chances. Second half we were always going to have to cede possession, and it was inevitable that we would have chances against us. But defending well, we held and I thought looked quite dangerous on the counter. In the end it was a frustrating afternoon not to take something from the effort the boys put in.

So despite that defeat, we go into today's game with Inverness in confident mood as we try to improve our home record. It won't be easy against an Inverness side that are returning to something like the kind of form that figure in the top six for much of last season. They have had a hard time with injuries, but from what I have been told about last week's game were unlucky not to beat Hearts. Of course, we are missing Johnny Russell today, but there is a good chance that we will have John Daly available again after missing the last two games through injury. He was back in full training, ahead of schedule this week, but though we won't rush him as he has proved in the past he is a quick healer, so having him back would be a big boost. Jon is an important member of the team, and with young lads like Lauri Dalla Valle up front, we could do with someone of his experience there to help them along. In addition, we have Ryan Dow available up front and he showed up well in the last twenty minutes of the Rangers game. But if we carry on from where we left off last week, we must be in with a good chance of getting that elusive first home win, though no one is under the impression that it will be anything but easy against Terry Butcher's team.