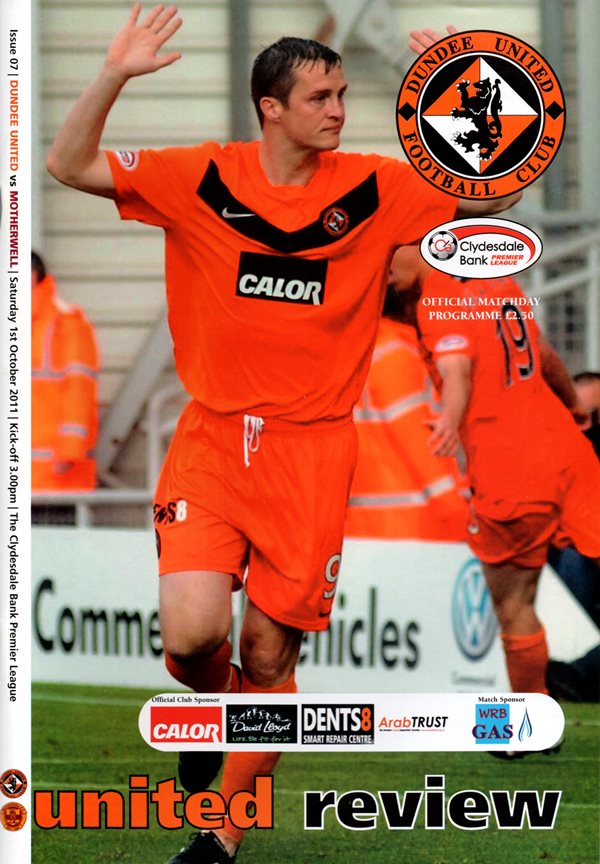 For the visit of Motherwell to Tannadice, Peter Houston made one change to his United line-up: Johnny Russell dropping to the bench with Ryan Dow taking his place in the team. Recent signing Gavin Gunning started in central defence against the club that he had been on loan to the previous season. In recognition of his impressive start to the season, Danny Swanson had been called up to the Scotland squad during the week. The Tannadice faithful were hoping that ‘Swanaldinho’ would be able to keep up his recent goal-scoring form having netted twice in the previous three games.

United were the first to threaten in the game and arguably should have been in the lead when Ryan Dow whipped in an in-swinging cross from out wide on the left which was met by Jon Daly but the skipper could only head the ball straight at Darren Randolph in the Motherwell goal. However it was the away side who opened the scoring in the 14th minute following a brilliant move down the right which was finished off by Keith Lasley who fired home Tom Hateley’s cut-back from the edge of the box. Motherwell were on top as United struggled to settle into the match with both Nicky Law and Chris Humphrey firing shots narrowly wide of Dusan Pernis’ goal. After half an hour Peter Houston decided to change things around with Ryan Dow coming off in place of Lauri Dalla Valle. The on-loan Finnish striker went close to bringing United level with a glancing header from a Keith Watson cross but Randolph did well to catch the ball. Tannadice was stunned into silence – apart from the small band of jubilant Motherwell fans – in first half injury time when a mistake from the usually reliable Dusan Pernis gifted the Steelmen a second goal. From Keith Watson’s pass-back Pernis scuffed his clearance straight into the path of Michael Higdon who controlled the ball before drilling a shot low past the embarrassed United goalkeeper off the inside of his left-hand post.

United came out at the start of the second half looking to somehow claw their way back into the match. Scott Robertson had a good chance to test Randolph with a free header following a corner but the midfielder could only head wide of the target. Only a brilliant last gasp challenge from Paul Dixon denied Keith Lasley a chance to score his second of the game when he was played through on goal by Jamie Murphy but luckily for United Dixon was on hand to mop up the danger. Motherwell did however score a third after Garry Kenneth tripped Nicky Law in the box. Referee Steven McLean pointed to the spot and from the resulting penalty-kick Michael Higdon confidently stroked the ball past Dusan Pernis: 3-0 the ‘Well. Former Motherwell defender Gavin Gunning brought out a brilliant save from Darren Randolph with a powerful, low drive from a free-kick before United grabbed a consolation goal through Jon Daly who slammed home after a goal-mouth scramble. Full time: a 3-1 defeat at the hands of Motherwell left United slumped in the bottom half of the table going into the international break.

The only thing to spoil last week was the unaccountable lapse that saw us toss away two points to Hibs at Easter Road last Saturday. Against Inverness in our last home game, I was delighted with the players' effort and commitment, though it took us a wee while to kill them off. Scoring three goals was also very pleasing, and certainly from the evidence of our last three games, we haven't got a problem in scoring goals, but we need to address that fact that against St Johnstone and now Hibs, we have scored three times, but we have also conceded three in those two games. Not that all the blame lies with the back four. I look at the goals we lost last week at Easter Road. I thought O'Connor's goal was brilliant, and no blame could be laid at anyone's feet. The second fell into the preventable category, however. There were other Instances in the game we were well organised when a corner came in, but not for that one unfortunately! Then within a minute, we conspired to lose another, though the boy finished it well. And had we come away from

Easter Road with the win that we deserved, and then combined with defeating Inverness Caley Thistle and Airdrie in the League Cup, it would have been a perfect week. I have got to say that at the end of the Hibs game, it felt like a defeat because we had got ourselves into a seemingly winning position. This afternoon, we welcome Motherwell. I have a lot of respect for their manager Stuart McCall and his assistant Kenny Black. At their disposal they have very good professionals and a nice blend of young and experienced players. When you have the likes of Chris Humphrey, Jamie Murphy and Michael Higdon up front, they pose a real threat. At the same time they are very strong in the middle of the park with the experience of Keith Lasley and Steven Jennings plus the young lad Nicky Law that they have brought in and who has been very impressive. So once again, we are in for a very tough match. Games between us have usually been ding-dong affairs. Earlier this year we were disappointing against Motherwell at Fir Park, but conversely, our home record against them was excellent. Hopefully therefore, we can continue our good form at Tannadice against them this afternoon!