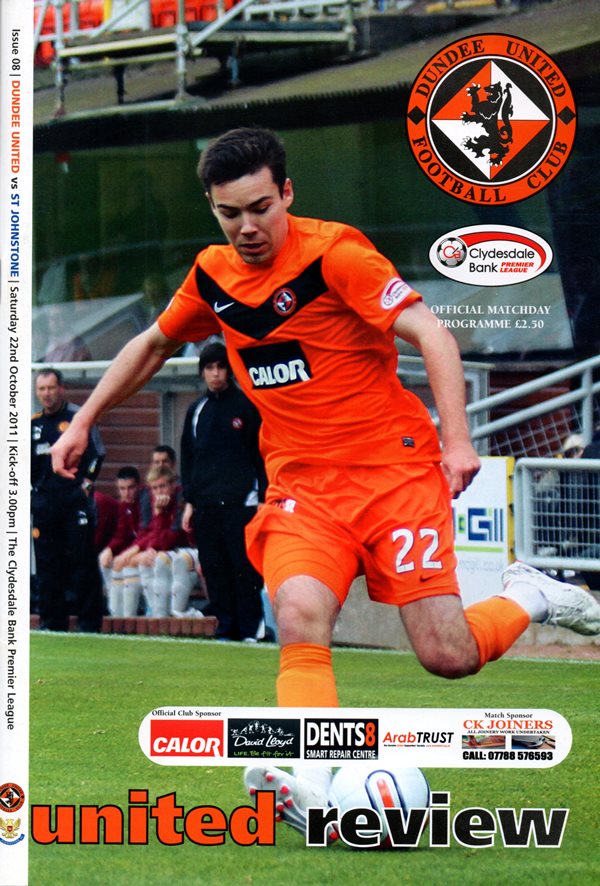 United made three changes from the team that suffered defeat to Aberdeen last week with Watson, Douglas and Dalla Valle in for Allan, Russell and the injured Danny Swanson.

The first half was a pretty scrappy affair and neither side seemed able to sustain any meaningful passages of play. However, Lauri Dalle Valle had tested Enckelman in the sixth minute from a tight angle. The half continued in a untidy fashion until the twenty-fifth minute, when arguably the best chance of the game fell to Barry Douglas. Keith Watson received the ball out wide on the right side and the young full back played a teasing left footed cross into the six yard box toward the onrushing Daly and Douglas. The big Irishman didn't reach the ball which fell unexpectedly to Douglas, who from five yards couldn't make the contact required to put United ahead. Six minutes later St Johnstone created their first real chance of the game and the last meaningful opportunity for either side in the half. Calum Davidson’s deep cross from the left found Frazer Wright unmarked at the penalty spot but the centre back’s free header was too high to test Pernis in goal.

The second half started a lot more promisingly as very early on Garry Kenneth struck his central, 35 yard free kick off the crossbar. This was immediately followed with a chance for the Saints, Davidson again flighting a cross into the box. Liam Craig met the cross and his flick on came off a United player and fell to Fran Sandaza, who from close range tested Pernis, and eventually the United defence cleared the ball to safety. Both sides began cancelling each other out and the second period started to resemble the first. Sandaza was at the centre of one of the few talking points to come out of the game. The Spaniard skipped past Garry Kenneth, who alongside the solid Gavin Gunning were doing well to marshal the in form striker, as he moved into the box Watson challenged cleanly only to see Sandaza go to ground. Referee Alan Muir however was not to be fooled and rightly showed the former Tannadice favourite a yellow card. The final ten minutes were slightly more end to end; in keeping with the previous eighty minutes no real chances were forthcoming, and the match ended in a goalless draw, securing United’s first SPL clean sheet since July in the process.

It would be staling the obvious that recent results have been disappointing. Conceding goals, and particularly the manner of them, has become a problem for us. Having studied the DVDs of our last six League games Rangers, St Johnstone, Inverness, Hibs, Motherwell and Aberdeen - almost all the goals have been down to individual errors. With the exception of Gary O'Connor’s goal for Hibs, which was a good move and finish, it isn't that teams are cutting us open. But until we stop giving soft goals away, life is going to be difficult. So this week has seen a lot of hard work on the training ground with the emphasis on concentrating more to eradicate the errors. Last week at Pittodrie for example, all the goals arose because we didn't attack the ball from set plays. The absence of Sean Dillon and Keith Watson has been a handicap, particularly as we have a small enough squad as it is. Hence the reason Willo Flood had to be pressed into service at right back, because with the young lads at youth level not ready for that step up, we have no other alternatives, but we'll keep working away. Meanwhile the fans have got to keep the faith. But over the last two seasons, which includes last season when we didn't start all that well, we still reached 61 points, which was only two less than the previous campaign. And if we have been slow starters, then you always get 100% from the and more victories will be on the way, so all I ask is that the fans are patient. That is particularly so as we are working with a much younger squad.

You look at the sides going well at the moment like Motherwell and St Johnstone, they mainly comprise of experienced players. Whereas almost every week we have eight or nine youngsters stripped for action. This time last year, I sometimes had the likes of David Robertson, Craig Conway or Morgaro Gomis on the bench, but now I only have kids available, not to mention three or four Under-21's starting the match. So it is a case of sticking with it as the youngsters gain the required experience and it might take a season or so for them to get used to the demands of the SPL. That said, I am still convinced that there are good times ahead and there is no need for some of the recent negativity directed towards the club. And this afternoon, we have another very difficult match against a St Johnstone side doing very well. They have great solid professionals and of course, we welcome back Fran (Sandaza) who was unfortunately blighted by injury whilst he was here. He went down to Brighton, but didn't get too much of a look in there, and now back up here and fit again, and playing to the high standard to which we know he is capable. So he's a threat and we know it will be a tough, tough match and we'll have to be up for it. The goals we lost in the last meeting with Saints were the start of our problems, but the lads did brilliantly to come back from 3-1 down to earn a draw, and possibly might have won the game in the end. And that's the kind of spirit that'll be required right now from everyone at the club and the fans to ride out this current sticky patch.