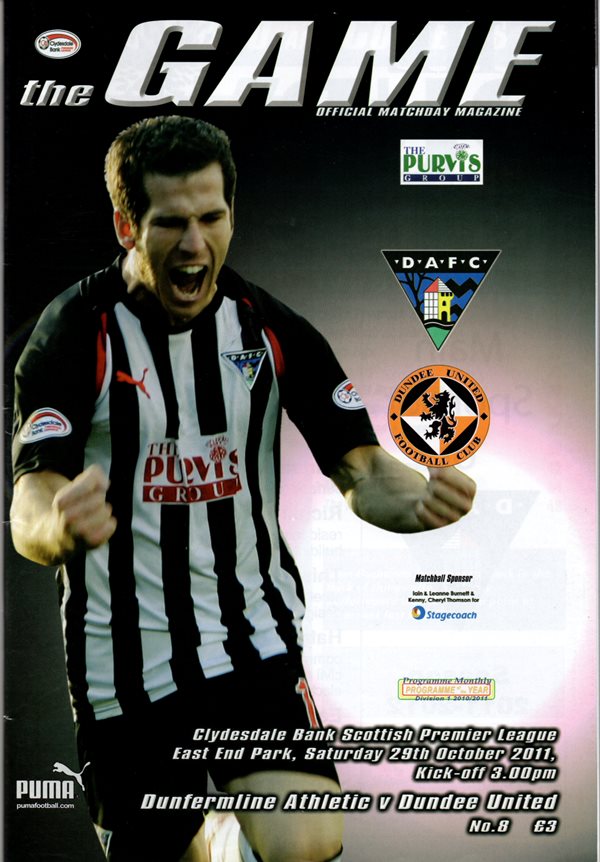 Peter Houston made two changes to his starting line-up from the bitterly disappointing defeat on penalties to Falkirk during midweek. Centre half Garry Kenneth failed a late fitness test, meaning skipper Jon Daly had to step back to the centre of defence to partner Gavin Gunning, with his place up front being taken by Johnny Russell, who had come on and scored against the Bairns. The only other change from the midweek cup exit was youngster Ryan Dow coming in for Barry Douglas who dropped onto the bench.Despite the recent disappointing run in the league, where United had only won once in the previous 10 matches and also suffered that League Cup quarter final exit, the players came out to a rousing reception from a strong away support that packed three sections of the stand behind Dusan Pernis’s goal.

The first attempt of note came for United, when Dow drifted in from the left to play a good one-two with Russell, only for his effort to sail harmlessly over the bar. United then came close when Gavin Gunning perfectly struck a free kick from 30 yards, only for Paul Gallagher to get down well to tip wide. Dunfermline were next to press when right-back Jason Thomson earned a corner off Jon Daly that the United fans felt was unjustified, then rose well to meet a Paul Burns corner but head over the bar. In the 13th minute, United took the lead in impressive style, when a Willo Flood dead ball from the right was not properly cleared and fell invitingly for left back Paul Dixon who perfectly drilled in a superb effort from the left edge of the box that gave Gallagher no chance before wheeling away with a Bebeto-style cradle goal celebration. United stormed into a commanding two goal lead in the 18th minute, and the goal had shades of the fortune that has eluded United this season. Paul Dixon played a shot-come-pass that landed at the feet of Lauri Dalla Valle, who seemed to mishit his first attempt, only for the ball to bounce kindly for him to slot home at the second attempt. Dunfermline tried to find a way back in the game and some good passing on the edge of the box nearly led to a breakthrough, but David Graham’s dangerous long-range effort landed just at the wrong side of the post. A bad start for the home side then got worse after 25 minutes when Garry Mason scythed into a challenge on Russell, with referee Stevie O’Reilly pausing for a moment before judging that the challenge was serious dangerous play and brandishing a straight red card. United, who were starting to look confident and creative on the ball in midfield, threatened to put the game beyond doubt. With 10 minutes to go before half time, Willo Flood played a powerful ball into the box from the right, which Ryan Dow did well to square for Scott Robertson, only for his effort to fly over the bar. Then Rankin threatened, taking the ball down well from a throw on the left before powering an effort over the bar. United went up the tunnel at half-time with a 2-0 lead. Despite all the pressure on United following their recent slump, the players managed to put on one of their most convincing halves of the season and looked confident knocking the ball about in towards the end of the half. They weren’t without fortune – with a slice of good luck about the second goal and the home side then feeling hard done by after the red card – but it was fortune that had been absent in most games so far this season.

United started the second half the way they ended the first and a weaving run by Ryan Dow ended with the youngster firing in a long-range effort that Gallagher held well. But they then appeared to start to lose their grip of the game, with Dunfermline starting to edge their way back into it First, Andy Kirk did well on the left before his cross from the touchline clipped the bar and went behind. Then, following some pressure, they scored when the ball deflected off Jon Daly and landed at the feet of Andy Kirk, who coolly slotted beyond Pernis. The Pars then had a spell when they threw everything at United, who desperately tried to cling onto the advantage. However United, with Mackay-Steven on for Dalla Valle, had a lot of pace going forward and always looked dangerous on the break, which set the game up for a frantic finale. The substitute was a constant threat and one of his corners was nodded over by Gunning with 20 minutes to go. Scott Allan, on for the lively Ryan Dow, nearly sealed the victory half an hour into the second half when he went on a mazy run, then drilled in a shot that was saved by Gallagher, then scrambled behind. From the Mackay-Steven corner, United did get a third, with Daly’s initial effort blocked only for the ball to fall to Johnny Russell who powerfully drilled home on the half volley. Immediately from kick-off Dixon broke on the left and squared for Russell, who had been the subject of the Dunfermline boo-boys since the Mason red card. The striker brilliantly fired in a first time effort that cannoned off the post and was alert enough to then meet the rebound, only for his effort to go wide. United appeared well on top again but, with 11 minutes to go, Daly tangled with Graham as he broke on goal. Following a lengthy discussion with his linesman, and with the home fans shouting for a red card, referee Stevie O’Reilly brandished only a yellow. Dunfermline, feeling hard done by, pressed and a goalmouth scramble nearly got them back in the game. United broke on the counter, though, and sealed the three points when Russell went on a weaving run then squared for Gary Mackay-Steven, who battered the ball beyond Gallagher with aplomb. For the first time this season, it seemed United could relax in the final minutes, with song after song coming from the vocal contingent in the away end as their side strolled to victory. United fans went home deliriously happy after a battling and, at times, entertaining performance from the players, who seemed to be well up for the game and full of fight. This was the first time that Dundee United had picked up three points at East End Park since the Club were under the management of Tommy McLean in 1997.