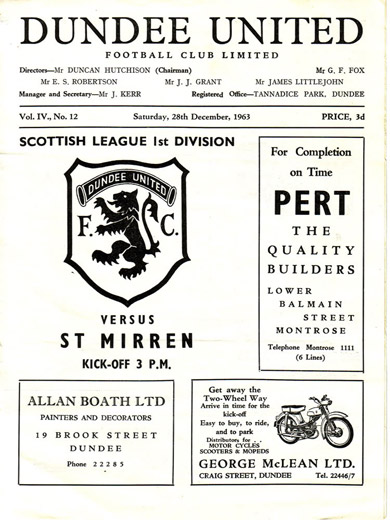 The opportunity of play this game on the Friday morning actually, seemed remote, with Tannadice icy and unplayable. However, a dramatic change in temperatures during the day and overnight rendered Tannadice wholly playable come kick-off time.

Sporting their all-black strip, United emulated the all-conquering New Zealand rugby tourists, as they produced their best display for some time, in a fast and furious tussle which saw Willie Allan of Saints, and Bert Howieson of United, ordered off. The first half was not indicative of the flurry of goals that was to follow. The 'Buddies', in fact, took the lead when Therolf Beck headed in a Tommy Robertson corner in the 13th minute. It took 12 minutes for United to restore equality, Dennis Gillespie pushing the ball in after Beattie had parried a Jim Irvine special.

After the interval, one-way-traffic was in operation — towards Beattie's goal. As the Tannadice all-blacks demolished the Paisley defence. Ian Mitchell notched the first of his 'hat trick' in 47 minutes when a Howieson header hit the bar. Eight minutes later, Ian Mitchell struck again, when he beat two Saints' defenders before shooting beautifully into the far corner. Jim Irvine made it 4-1 with a typical 20 yarder. Saints' winger, Jim Robertson pulled one back almost immediately, but United hit back again in the 75th minute. Jim Clunie stumbled and that allowed Ian Mitchell in to complete his 'hat-trick'. United's sixth and final goal came two minutes from the end, when Jimmy McManus hooked in a Denis Gillespie free-kick. This meeting was a dress rehearsal for the Scottish Cup meeting between the pair a fortnight later, but didn't prove a reliable form pointer. Saints' hanging on for a goal-less draw at Tannadice, winning the Love Street re-play 2-1, and that has been a continuing saga over the years with our frequent cup exits in Paisley, particularly over the past seven years.