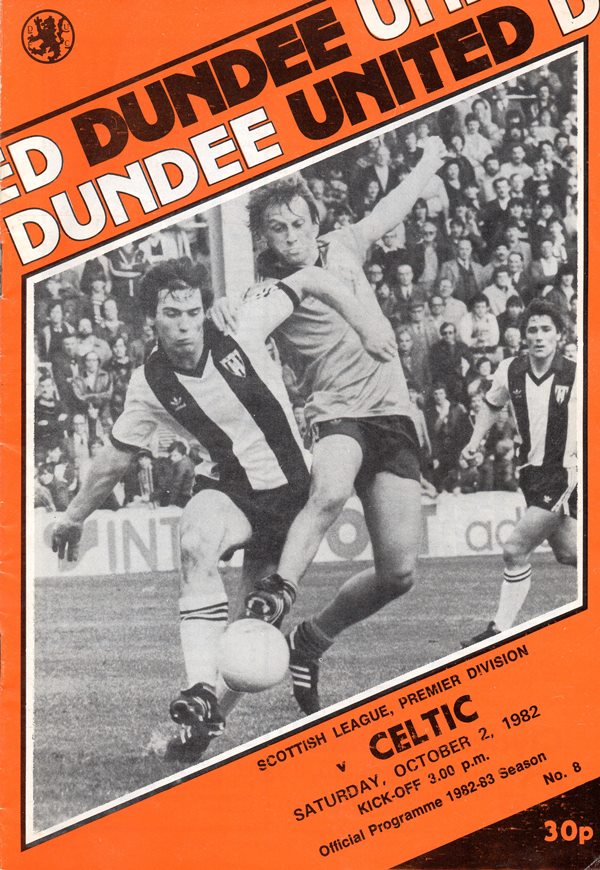 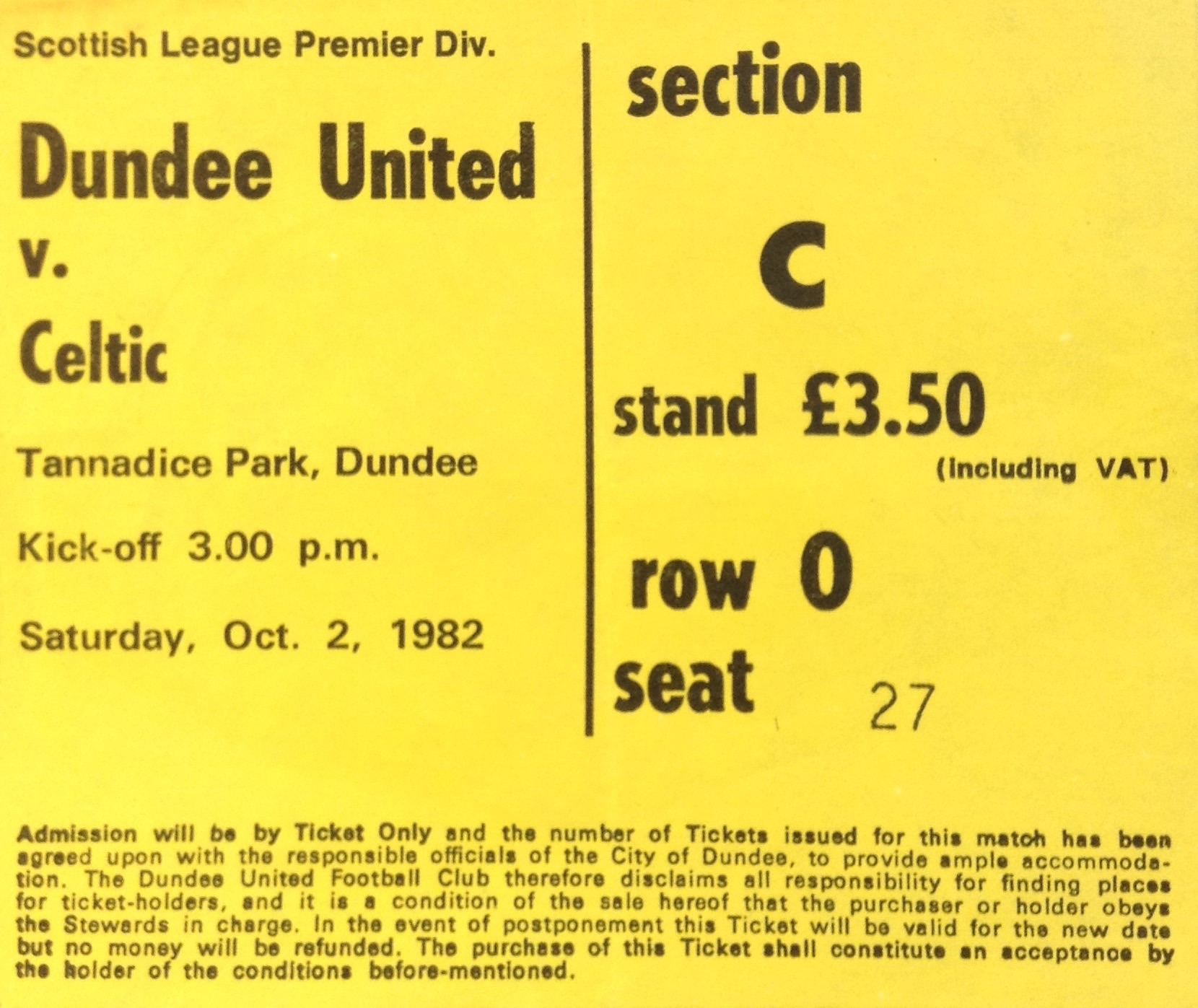 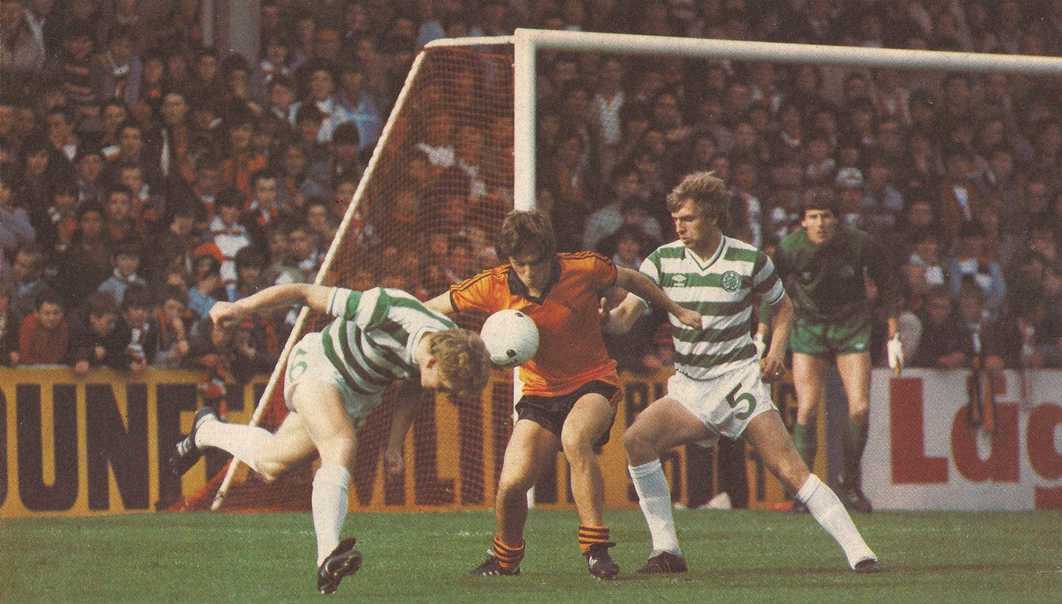 United and Celtic had been on European duty in midweek, not only that, but both had returned from Holland with quite magnificent results against the odds. United had dimmed P.S.V.'s lights with a 2-0 victory over the Dutch league leaders in Eindhoven and it could easily have been more. Celtic, meanwhile, had eclipsed Ajax the same evening. Celtic' injury worries after leaving Ajax aggrieved - Aitken. MacLeod and Provan - had all recovered, whilst Jim McLean freshened up Unifed's Dutch masters by bringing in Maurice Malpas with lan Phillip being left out. With both sides unbeaten at home and abroad, the question was whether one of those records was going to be busted in the early October sunshine. The answer to that a minute into the second half was very much in the affirmative!

Celtic had very much the better of the first half and scored a quite magnificent goal after twenty minutes. A corner from Danny McGrain was headed out by Paul Hegarty but only as far as, a then teenage, Paul McStay. He proceeded to crash a 30 yarder past a stranded Hamish McAlpine. The Celtic support immediately and rightly chanted, "What a goal." If that wasn't bad enough, United were dealt a double blow within the space of four minutes, having to use up both substitutes. First Eamonn Bannon limped off in the 27th minute. Then his replacement John Holt was injured after his first tackle and lan Britton subbed the sub! Nicholas did hit the post with a typical piece of inventiveness from cheeky Charlie, but a sustained United onslaught on Celtic's goal immediately prior to the interval hinted of better things to come.

However, those hopes suffered a severe set back a minute after the restart. A series of passes involving Murdo MacLeod, Mark Reid and Roy Aitken, the latter collected a reverse pass from Murdo MacLeod before slamming the ball past Hamish McAlpine. After 55 minutes, Dave Narey was cautioned after an off-the-ball incident with McGarvey, and straight away Bonner kept out a Paul Sturrock shot with his legs. There were more bookings - this time after Ralph Milne and Danny McGrain became involved in a scuffle which earned the pair yellow cards. For the first time in the game United were dominating play, but squandered chances looked set to cost them dearly. The penalty claims of Paul Sturrock after he had been charged down by Murdo MacLeod in the box were rejected by referee Syme 16 minutes from time as United's hopes diminished. However, four minutes later. United did pull one back. Ralph Milne dragged the ball wide on the right and passed the ball inside to Paul Sturrock. His shot was parried by Paddy Bonner, but the in-rushing Davie Dodds provided the finishing touches to give United a life-line. Fittingly, the man to pull the coals out of the fire for United was Ralph Milne. He set up the first and almost uprooted the woodwork in the first half. Four minutes from time, Ralph Milne accepted a pass from Davie Dodds to fire home a glorious equaliser from just inside the area to complete an astonishing comeback. Yet this was a below par performance by United as manager Jim McLean's post-match comments indicate. "We were second to everything and played badly even before injuries upset our formation. However, the players deserve tremendous credit for the way they came back." The point was the first Celtic had dropped in five outings and they remained top. United were level with Rangers two points behind, after the Ibrox side had been held at home by Dundee that afternoon.

Unfortunately these notes had to be penned prior to our mid-week trip to Holland but overall I was extremely satisfied with our two previous outings against St Mirren and Aberdeen. Even I couldn't have wished for two better performances in preparation for an extremely difficult tie. Our display at Pittodrie must have been emulated or improved upon, if we are to have made further progress in the UEFA Cup. I realise that if we have been unsuccessful in our mission, people may say Scottish football lags behind its European counterparts. I trust that even if we have failed, our display will have enhanced the reputation of Scottish football abroad. Our opponents this afternoon, Celtic, were also engaged on European business in Holland and I sincerely hope that both sides are still involved in their respective European competitions. The Parkhead side are an exceptionally talented team and this is a fixture that sells itself. The League's 'Mr Computer' couldn't have handed us a stiffer opening to the new season. Aberdeen (home). Rangers (away). St Mirren (home) and now Celtic at home complete an opening spell against the top Premier clubs, which couldn't possibly have been any harder.

Bill McNeill's side have won the title for the past two seasons but in that period, we have eliminated them from both cup tourneys at the semi-final stage, thus proving we are able to match them on our day. Their record, however, proves that they have more good days than ourselves. I wouldn't like to insult any one of their side by pin-pointing an individual and without doubt they are the best side in Scotland. We too, are approaching their high standards, but as always, I am not completely happy with the depth of our squad up front. My efforts to strengthen that area have been frustrated especially with ready cash so tight. To do well in all competitions, you are completely dependant on the fringe players to freshen up the side. There is no better example of this than Celtic, who have had players of the calibre of George McCluskey, Danny Cairnie and even Charlie Nicholas on the bench. That alone gives clear evidence of the quality of this afternoon's opposition and the task that lies ahead for our own side.