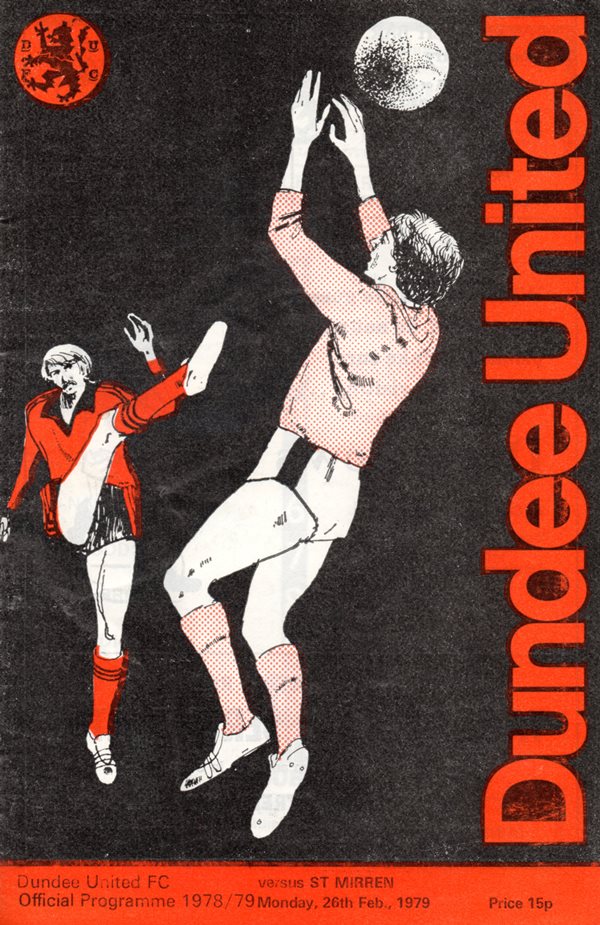 With George Fleming suspended for this much delayed cup tie, Frank Kopel, Derek Addison and Graeme Payne returned to the starting line-up, with Davie Dodds and John Holt dropping to the bench. This match finally got underway at the ninth time of asking since its original postponement nearly a month before.

This tie got off to a brisk start with United playing Iain Phillip at the back and Ray Stewart and Dave Narey in midfield. In seven minutes, of mainly United pressure, a Graeme Payne cross was headed towards his own goal by Beckett with Thomson having to be at his best to keep it out. Stark laid on a chance for Torrance and McAlpine had to be smart to rush out of his goal and block the shot. United were shooting at every opportunity but were too anxious and rarely troubled the keeper. A Payne-Stark-Narey move had St Mirren in trouble but Thomson saved Narey's final shot, and minutes later the keeper had to save a Stewart pile-driver at his near post. McGarvey was only a foot wide with a left-footer, and at the opposite end Dunlop appeared to handle a Sturrock cross, but the referee waved play on. With two minutes to go to half-time, Thomson pushed a Stark cross straight to Sturrock and the striker's shot was netbound when Beckett pulled off a great save. A glaring penalty, but Narey's spot kick was saved by Thomson to the immense jubilation of his mates, taking United's ignominious record of penalty misses to five out of six this season.

St Mirren were first to threaten after the interval, with Richardson's fierce low shot bringing out a good save from McAlpine. Hegarty got his head to a Stewart free-kick only to see Thomson right on the spot to save. Beckett was booked for a bodycheck on Addison as the United player seemed set for a clear run through on goal. United's bad luck continued, when a Hegarty header from a Payne corner landed at Sturrock's feet only a foot from goal, but the ball was unbelievably cleared by two St Mirren defenders on the line. Stark came close with a curling shot that slipped inches past the near post, but with 15 minutes to go St Mirren took the lead. Whilst chasing the ball with McGarvey, Phillip was too canny with an attempted pass-back to McAlpine, and Tony Fitzpatrick nipped in between the two to poke the ball into the net. There was worse to come, as Billy Stark put the issue beyond doubt when McGarvey hit a hard low cross into the goalmouth and Stark forced it over the line.

United fans left Tannadice wondering how they were out of the Scottish Cup, beaten for the second time in two years by St Mirren. But id you can't score from the penalty spot, you don't deserve to win cup ties.

While realising that the fourth week in February is a bit late for first-footing, I'm sure I speak for everyone here at Tannadice — and elsewhere in Scottish football — when commenting, 'It's great to be back!' Since the weather gripped us during late December we have at least managed two outings at Paisley and Ibrox and the disappointment of these Premier League reverses has hardly made for raising the temperature here at Tannadice. Throughout the big freeze-up things have become steadily more infuriating for everyone within the club with the series of on-off decisions increasingly ruling the lives of all concerned. While agreeing that every club is in the same boat, it makes things no less difficult to take, with the problems of training facilities, etc., becoming a daily headache. We have been reasonably fortunate in that facilities in the Tayside area have been sufficient to allow us to carry on with at least a part of our normal programme, although only a minor part. Gymnasiums are, I feel, a wonderful thing for any club lucky enough to have access to, but they are in my opinion only simply cannot be carried out in such an enclosed area.

Lucky enough to have access to, but they are in my opinion only an extra. The real work simply cannot be carried out in such an enclosed area. No, this latest close-down of the game has lasted just too long this time, with everyone, not least of all the players, bearing the brunt. Because like most other clubs the playing staff here at Tannadice rely heavily on their incentives, and in view of our reasonable successes in the period up to the halt, the opportunities of incentive simply have not been there. However, one aspect of the recent barren spell brightened the gloom — The naming of Paul Hegarty, Dave Narey and Raymond Stewart in the international squads once again. The enforced closedown because of the weather has been a blow, but there again we have been no more badly hit than any other club and must therefore work all the harder to get back into the winning form which prevailed prior to the break. Tonight's guests, St Mirren, will not as I have long said be an easy Cup task for us. The Love Street side have shown during the past month or so that they are now capable and determined fellow challengers for the Premier League title. However, as far as we are concerned both remaining competitions are highly important to everyone at Tannadice and I look to the side tonight to battle, through for a result we simply must get.