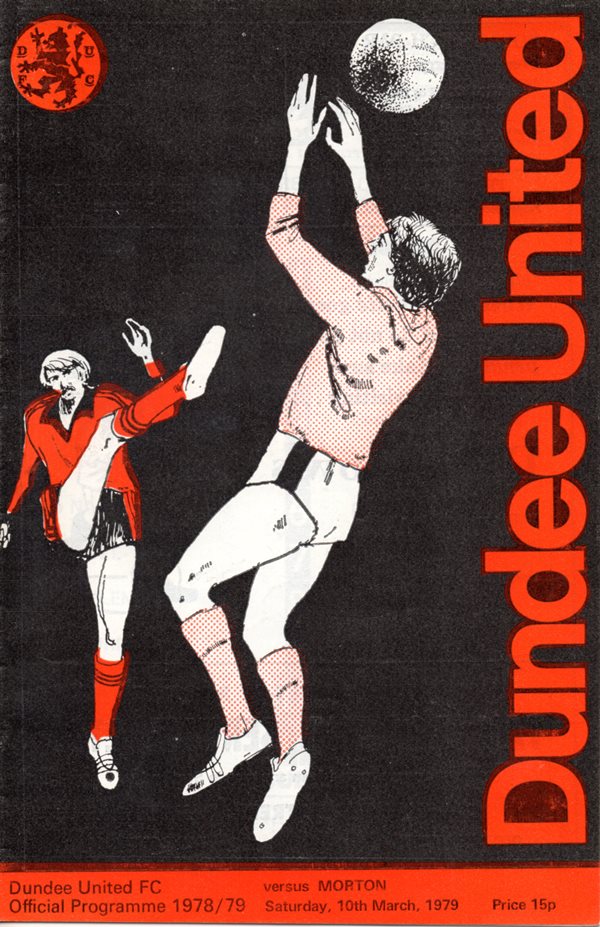 Having been knocked out of the Scottish Cup in the previous round, United had a free weekend as the fifth round fixtures took place, so this League match against Morton that had been postponed back in January was quickly re-arranged, giving United their first home League match in eleven weeks. United made just one change from the 13 on duty at Fir Park, with Derek Addison replacing Frank Kopel on the subs bench. Ben Rooney's men, who had so far won both games against United this season, had newly-signed ex-Celtic keeper Roy Baines in goal.

United pressed hard from the off, and after four minutes Paul Sturrock attempted to lob Baines as he came off his goal-line, but the brisk wind at United's backs helped the ball over the bar. United went ahead in the 13th minute, when Kirkwood laid off to Paul Sturrock, and with his back to goal and Hayes in close attendance, he wheeled round and sent a low shot past the diving Baines. Three minutes later the Tannadice supporters were cheering another cracking goal, when Sturrock crossed from the right, Fleming laid off to Derek Stark who crashed in a rocket shot high into the net from 25 yards. The visitors pulled one back in the 24th minute with an own goal, when

Welcome back to Tannadice for to-day's rearranged Premier League visit of Morton, a fixture which was one of the many which fell victim to the weather during the first two months of the year. And that long break for us and others has proved costly. It is really amazing what a transformation in fortunes can occur in a couple of months. Prior to the freeze-up we were sitting pretty at the top of the pile, having remained there far over 100 days as leaders. Then, just as quickly as it took everyone to get babk into action again, we were, prior to midweek, down in amongst it again. As I have stated publicly, luck or rather the lack of it, has played a major part in that downward trend. Mind you, I do not claim that that is the only reason. Neither the players nor myself are entirely blameless for the results of late, but giere again we have never claimed to be. For as far as I am concerned I firmly believe that we quite simply have not been gettiffg even a fair share of the breaks. For instarice, Weather conditions being what they were, the fixtures that were managed^to be fulfilled were all but our Cuptie, away from home. That Wednesday night clash against Motherwell at Fir Park was in fact our fourth successive Premier Tannadice. Motherwell at Fir Park was in fact our fourth successive Premier League game away from Tannadice.

And when I think that in those games and the Cup-tie here against St Mirren we managed to dominate for at least 75% of the time, we therefore should have made better use of our advantages, i We have created numerous scoring opportunities throughout that spell without making! them count, but there again I feel that the run of the ball has not always gone for us on those occasions. However, despite these setbacks, we simply must keep at it with the players themselves, hopefully shrugging off the disappointments and returning to the form they showed prior to the upheaval. One thing is certain — there is still an awful lot to play for this season despite our Cup exit, and I look to everyone to give that little bit extra to achieve it. To-day's visitors, Mofton, had strung togeAer a series of fine results prior to their Cup elimination earlier this week, and our task to-day will be far from being an easy one — but there again, it never is in Premier League company.