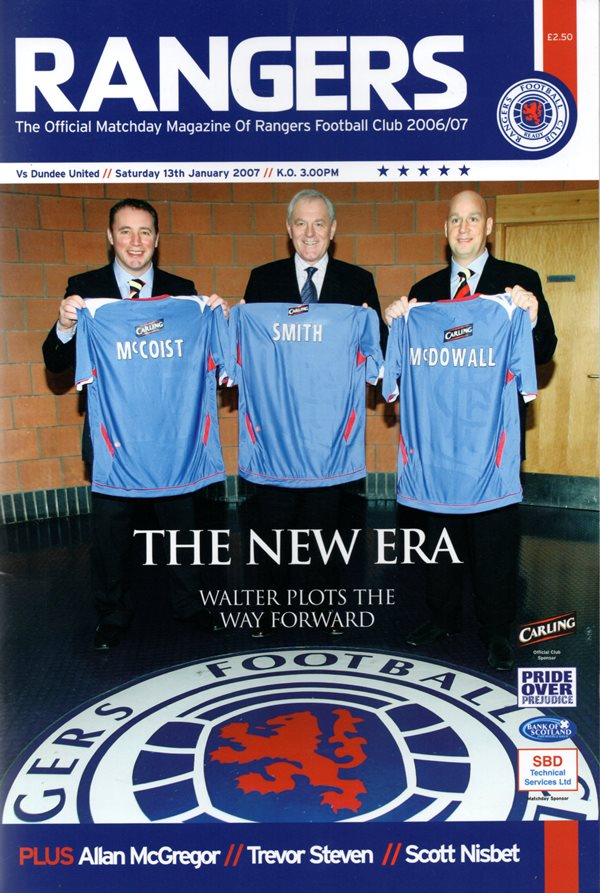 Rangers fans left this match wondering how Walter Smith had transformed the Ibrox side in only his first fixture in charge. In truth, United marked his homecoming by gifting him three points after dominating much of the first half.

With captain Robson suspended, it was a youthful United side that took to the field – all the outfield players 25 or under. Greg Cameron stepped in to midfield, and there were debuts for Irish duo Sean Dillon at right back and Jon Daly as lone front-man in a 4-5-1 formation. Walter Smith restored Barry Ferguson and brought in Burke, Clement, and Prso in place of Novo, Sionko and Rodriguez.

The young United side started brightly – Jon Daly proving a handful for the Rangers defence – but too often the final ball into the box was disappointing. Goalkeeper McGregor inexplicably almost handed United the lead on ten minutes, when he rushed to the edge of his penalty area when there was no need. The ball broke to Conway, but his shot lacked power and was cleared from the line by Svensson, with the keeper stranded. United failed to capitalise on another opportunity on 23 minutes. Craig Conway beautifully nut-megged Ferguson at the edge of the box, but with players waiting to convert, his cross was too close to McGregor.

Rangers had been outplayed and outpassed, and repeatedly foiled by a well-organised off-side trap. Yet somehow they were in the lead on 24 minutes. Derek Stillie – recently in great form for United – unnecessarily rushed from his penalty box but failed to clear to safety. The ball fell for Charlie Adam who finished first time from around forty yards. United fought back with a Daly header deflected inches over, then the big front man skewed a shot past the far post from an acute angle. Boyd missed a good chance to add a second for Rangers, but the home side did not have to wait long for United to gift them another opportunity. A deep cross from Adam on the left was not dealt with at all by United’s rearguard, and though Boyd missed out again, Burke nipped in to score with a header.

Having shot themselves in the foot twice, United found themselves looking to the weather to save them at half time. However, despite wild wind and rain, the pitch survived a half-time inspection.

United switched to 4-4-2 in an attempt to get back into the match, with Archibald coming on for Kenneth. Again United started brightly, and on 47 minutes almost grabbed a life-line when Cameron came within inches of converting Conway’s cut-back. But Rangers were far more positive in the second half, boosted by a two goal lead and their midfielders enjoying the extra space in the middle of the park. Nacho Novo – forced into action just before half time because of an injury to Dado Prso – was instrumental in their revival. Rangers had created a number chances before Novo set up Boyd to shoot home the third on 59 minutes. Boyd also grabbed number four on 68 minutes, this time heading home an Ian Murray cross from the left. After something of a lull, Boyd turned provider on 87 minutes, his head-flick putting Ferguson in the clear. The captain rounded Stillie to complete the rout.

A match that had looked promising for United at the outset had somehow become a heavy defeat.