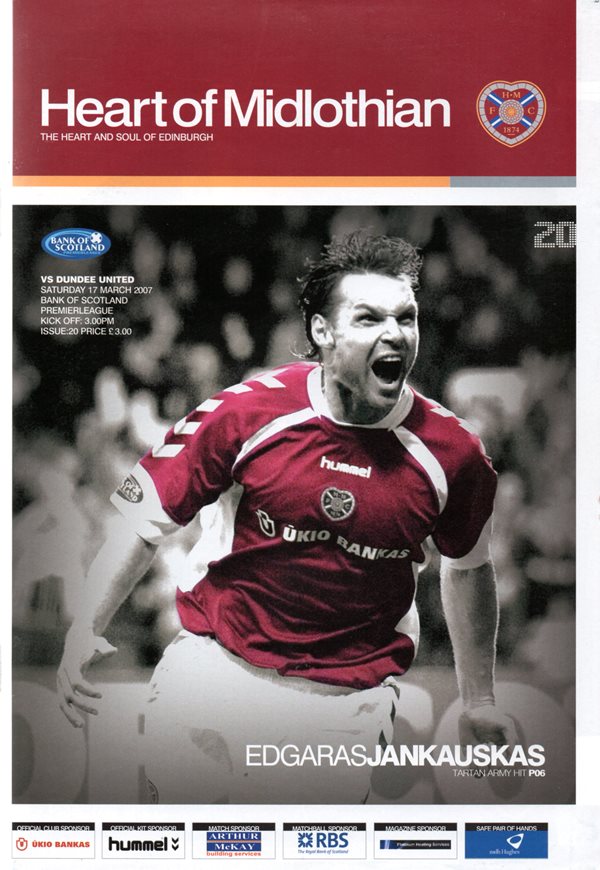 Hearts went into this game knowing three points were essential to keep alive hopes of UEFA cup qualification. United supposedly had nothing to play for - but you certainly wouldn't have thought so after a blistering second half display

In blustery first half conditions chances were pretty scarce. Pospisil had the first clear sight at goal on 8 minutes, but his header from Aguiar’s corner was straight at Derek Stillie. With 31 minutes on the clock, Steven Robb picked up the first caution for a foul on Mikoliunas. As if to sum up the scrappy standard of play, Aguiar ballooned the subsequent free kick over the bar. But off the ball, the referee spotted Ibraham Tall and David Robertson getting involved and both were red-carded – an incident which was to transform the game. Hearts reacted to the loss of their right back by playing their remaining defenders as a back three, with Mikoliunas and Driver operating as auxiliary wing-backs. It was not a formation the players looked comfortable with. Carrying on in 4-4-1, United managed the transition to ten men far more smoothly, with Hunt and especially Robb ruthlessly exploiting gaps in the wide areas. As half time approached Robb twice broke free on the left, his first cross picking out Daly who was denied only by a last ditch Berra tackle, and his second finding Noel Hunt who controlled well, but his shot was easily saved by Gordon. With United finishing the first half in the ascendancy, Barry Robson’s in-swinger from the right was well-met by Daly, but his downward header bounced up over the bar.

Hearts replaced Velicka with Jankauskas at half time, but it would not be long before United’s increasing supremacy would lead to goals. First however, United had to thank keeper Stillie for a fine diving save to deny Pilibaitis from 30 yards. It was from the resulting corner that a lightning break allowed United to take a fifty-second minute lead. McCracken found Hunt who switched play to Robb on the left. The little winger rolled the ball into the path of Barry Robson, who finished with a beautiful low drive from the edge of the box. Hearts responded immediately and Stillie had to be alert again to tip over a powerful Driver shot from twelve yards. Mikoliunas picked up the second yellow card of the day for a foul on Kalvenes, before United should have doubled the lead on fifty-six minutes. But the all important second goal arrived on fifty-nine minutes. Barry Robson latched onto a Daly pass, skipped past two defenders at the edge of the box and nutmegged the keeper. Hearts replaced Pospisil with 16 year-old debutant Gary Glen, and Karapidis came on for the injured Zaliukas, but on the whole Hearts rarely looked like getting back into the game. The match was put beyond doubt with twenty minutes remaining. Kerr slipped a lovely pass out to Robb. Once more the winger nipped past his marker Karapidis, and his low cut back was blasted home at the far post by Noel Hunt. With his job well done, Steven Robb was brought off to a standing ovation from visiting Arabs with Collin Samuel given a run out. A nice run and shot from Goncalves almost made the score look a little more respectable for Hearts, but it looked much more likely that the lead would increase. Into the final quarter hour, Hunt and Wilkie were both within inches of converting a low Kerr cut back. The fourth and final goal eventually arrived on seventy-eight minutes. With Alex McLeish watching in the stands, Barry Robson completed an impressive hat-trick, coolly cutting inside Aguiar and sending a low right-foot shot into the corner of the net.