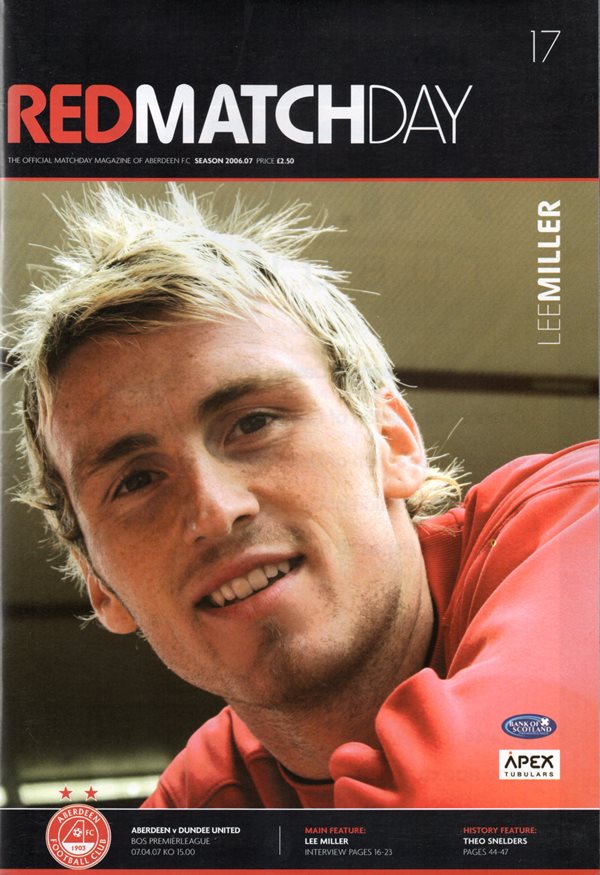 A whirlwind first half of football at Pittodrie gave United the platform to see off Aberdeen and take the points from this afternoon’s Premierleague match. An early Jon Daly penalty, a Noel Hunt header and a Greg Cameron double gave United a 4-2 lead six minutes into the second half, with Steve Lovell and a Darren Mackie penalty providing Aberdeen’s goals.

Aberdeen welcomed back Ricky Foster and Michael Hart from suspension as Jimmy Calderwood made three changes to the side which defeated Kilmarnock at Rugby Park last time out. Lovell was the other man to come in, while Zander Diamond, Dan Smith and the injured Gary Dempsey were the men to make way.

United also showed three changes to the side which drew at home to Celtic. Craig Levein recalled Christian Kalvenes and Noel Hunt after suspension, replacing Stuart Duff and the injured Stevie Robb respectively. Greg Cameron also came into the side, replacing the suspended Barry Robson, as Lee Wilkie took over the captain’s armband.

The game began at a high tempo, and United were awarded a penalty inside 26 seconds. After Aberdeen kicked off, United won possession, and Collin Samuel ran at a troubled Michael Hart, who pulled back the United man inside the area. Mike Tumilty showed no hesitation in pointing to the spot, and Jon Daly confidently picked up the ball and slotted home the spot kick, sending Langfield the wrong way.

United’s lead lasted only five minutes though, after Cameron was penalised for a foul on Severin in midfield. Clark touched the free kick to Severin, with Stillie wrong-footed by a deflection from Lovell on its way through. The Dons moved ahead three minutes later, and it was another set piece which was at the root of the goal. David McCracken was adjudged to have tripped Foster as he ran into the area, and Mackie found the net beyond the diving Stillie from the spot kick.

Despite three goals in the first ten minutes, the tempo didn’t let up, and United hit back. Hart was again skinned by Samuel on United’s left, and again Hart had no option but to foul his opponent. Sean Dillon swung in the free kick, which was met by the perfectly timed jump of Noel Hunt who powered his header into the bottom corner.

The unbelievable rate of scoring continued, with United earning the lead once again five minutes later. This time it was Jon Daly who was fouled by Andrew Considine in midfield. Greg Cameron showed great presence of mind to take a quick free kick out to Kalvenes in space on the left, and after Daly had met the Norwegian’s cross at the back post, Cameron was on hand to smash his shot in off the bar.

At the other end, scoring opportunities also came for Aberdeen, and United had Derek Stillie to thank for his good reactions to parry a Lovell drive at his near post, then push out Mackie’s header.

Once the game settled down after the frenetic opening, United looked confident and composed in possession once again; the midfield continuing the work ethic which had worked so well against Hearts and Celtic, and Aberdeen continually resorted to long balls forward.

With his side seeming to be second best in the opening half, Jimmy Calderwood made a bold substitution at half time, Russell Anderson being replaced by winger Chris Maguire, as the Dons switched to three at the back.

However, despite their increased attacking intent, Aberdeen were continuing to be given problems defensively by United, with Noel Hunt running onto a loose ball five minutes into the second half. He made his way into the area, but as he looked to round Langfield, he was crowded out by three defenders.

The fourth goal wasn’t long in coming through. Only a minute later, Hunt again found space in the inside right channel, and angled a shot across Langfield which came back off the post. Greg Cameron had showed great attacking instinct, and was left with an easy finish beyond the Aberdeen ‘keeper from close range.

Aberdeen again looked to become more attacking, but United looked comfortable with a two goal lead, and made themselves increasingly difficult to break down. Mackie’s shot from long range was held by the United ‘keeper, who also blocked Brewster’s effort with his legs and easily held Lovell’s header shortly afterwards.

Once again, Kerr and Gomis covered every blade of grass in closing down opponents, breaking up play and picking up second balls, while Cameron also showed that he was worthy of a recall, using the ball well and assisting his midfield colleagues. Defensively, United again looked assured, with Wilkie and McCracken dealing comfortably with the long high balls Aberdeen played forward.