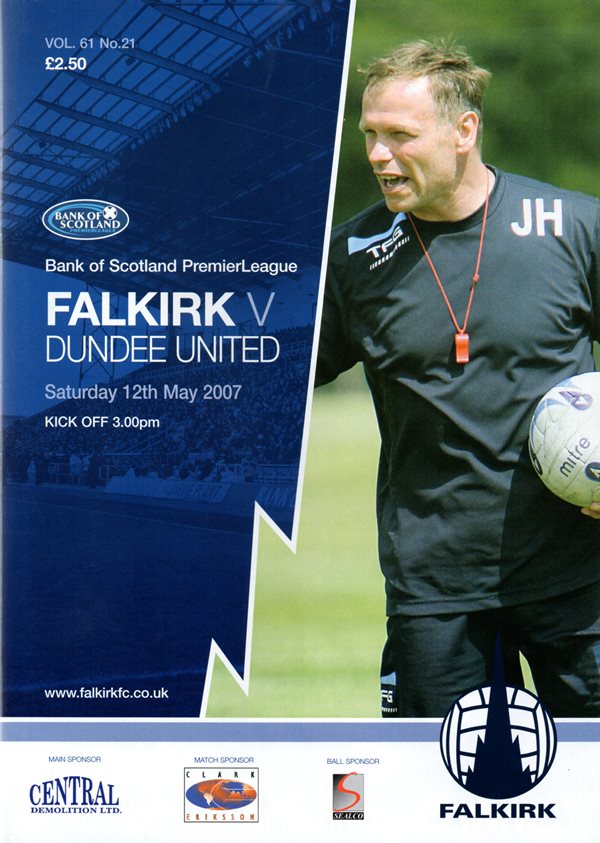 Falkirk chalked up their sixth successive victory against Dundee United today with a comfortable two goal win. The under-strength visitors were largely toothless in attack, and sloppy at the back, and barring a decent spell toward the end of the opening half, they rarely threatened to recover from the loss of a terrible early goal.

Steven Robb, Craig Conway and Greg Cameron came back into the starting eleven in place of Gomis, Easton and the suspended Hunt, with Collin Samuel operating as the lone striker. Falkirk, playing a 4-4-2 formation, made only one change from the side that defeated Inverness last week: Steven Thomson returning to captain the side at the expense of John Stewart.

United could scarcely have got off to a more disappointing start. Just four minutes in, Sean Dillon was woefully short with a headed back-pass allowing Finnigan to lob the exposed Derek Stillie. David McCracken did well to stop the ball on the line, only for Russell Latapy to follow up and tap the ball home. Less than two minutes later and Falkirk almost doubled the lead. With the United defence expecting a cross, Latapy cleverly rolled a free-kick into the pass of Vitor Lima and his beautifully struck drive from 25 yards went inches over the bar.

Having been very much on the back foot for the opening quarter hour United fashioned their first real chance on 17 minutes, but David Robertson’s volley was blocked by Milne. United were gradually getting on top in terms of possession and territory and their best chance came on 25 minutes. A great run and cut-back from Conway on the left fell to Steven Robb six yards out, but a weak effort was easily gathered by Schmeichel. Robb, Kerr and Samuel had half chances as the first half came to a close, but though United went in at the break a goal down, at least there was optimism among Arabs that their side could get back into the game.

They were to be very much disappointed as Falkirk wrapped up the points on 51 minutes. Liam Craig intercepted a misplaced Wilkie pass, and substitute Moutinho set up Alan Gow who fired clinically into the corner of the net from the edge of the box. The Bairns looked hungry for more goals and only a fine performance from Derek Stillie kept the score at two. An amazing one handed save from a point blank Liam Craig shot was the pick of the bunch, soon after the second goal.

Manager Craig Levein repeatedly chopped and changed his side, with Lee Wilkie eventually asked to add some physical presence up front. His lay-off set up Samuel for a powerful 18 yard shot which Schmeichel blocked well. But Stillie was by far the busier of the two keepers, diving to his right to push away Gow’s free-kick a couple of minutes later. But any remote chance of United getting back into the game disappeared when Lee Wilkie picked up a second yellow card for a late challenge on Barr.

After Samuel missed a good chance from a header, Stillie pulled off another stunning save to deflect a John Stewart shot against the post. Gow was next to try his luck, dancing past two defenders in the box, only to over-run the ball slightly and Stillie was able to collect at his feet. Amid a flurry of substitutions Falkirk seemed increasingly content simply to keep possession, which they did easily against ten men.

Only two real positives for United fans from this game; the debut of striker Johnny Russell as an 80th minute substitute, and an outstanding display from Derek Stillie.