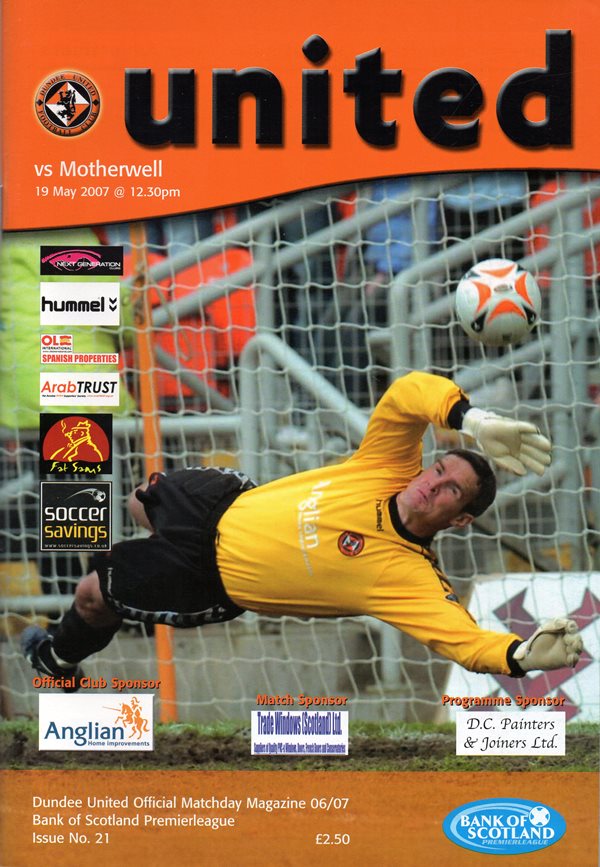 United brought the curtain down on the season with a goalless draw at a windswept Tannadice today. A solitary United goal since the split indicates what the main problem has been in recent weeks – but to be fair, United could have had two or three against Motherwell, but for some bad luck and inspired goalkeeping.

Following defeat at Falkirk last week, Lee Mair replaced the suspended Lee Wilkie at centre half, and Steven Robb stepped in at left back in place of the injured Kalvenes. Noel Hunt returned to play through the middle, with Conway and Samuel supporting from wide positions. David Robertson dropped onto the bench. Motherwell made five changes from the team that collapsed at home to St Mirren, Jim Paterson, Darren Smith, Kenneth Connolly, Mark Reynolds, and Jamie Murphy all starting, with Craigan, Corrigan, McBride, Keegan and McGarry making way.

A bright start to the first half saw good early chances at both ends. On 4 minutes, the visitors’ Ross McCormick did well to collect a throw, escape his marker, and his powerful shot from the right of the penalty box clipped the crossbar on the way over. At the other end Craig Conway should probably have broken his scoring duck when teed up eight yards out, but his shot lacked power and Meldrum dived to his left to parry the ball to safety. McCormick was involved again on 10 minutes, a mazy run finishing with a 25 yard drive that Stillie had to beat away. Then with a quarter of an hour on the clock, only a fantastic save from Colin Meldrum, low to his right, stopped United taking the lead though a close range Noel Hunt header.

United went on to develop a stranglehold on the game in terms of possession and territory, but tended at times to overplay the ball without getting a dangerous ball into the box. After something of a lull, Collin Samuel brought the game to life again just after the half hour mark, cutting inside onto his left foot and hitting a curling shot which drifted just inches past the far post. In the closing stages of the first half, Craig Conway went even closer, his shot on the turn from 8 yards rebounding back off the underside of the crossbar. But while United had a stranglehold on the game, Motherwell remained dangerous and a fine curling cross from Murphy seemed to get a faint flick off McCormick’s head on the edge of the six yard box, when perhaps he should have left the ball for Smith who was better placed to score.

A more even second half took a similar form to the first – a bright start which then faded badly. United seemed most dangerous at set pieces. Soon after the restart, Lee Mair headed just over from Steven Robb’s corner, while at the other end David McCracken did well to close down Vadocz after good link up play with McCormick. On fifty eight minutes Lee Mair once more got on the end of a Steven Robb set-piece, this time drawing a brilliant save from Meldrum, low to his left. Bizarrely, the goalkeeper then took a short goal-kick straight to Craig Conway, but recovered in time to block with his feet. Meldrum’s eventful afternoon was brought to a premature halt as he was replaced by Smith, having picked up a knock. Great work from McCormick to win the ball from Kerr allowed Paterson to cross for Murphy, but under pressure the youngster was only able to put the ball over from six yards out. Smith was called into action by a 20 yard Sean Dillon shot with over twenty minutes left. And that was to be the last time goalkeepers were seriously involved as the game petered out amid a flurry of enforced substitutions. McCormick and Hunt had half chances, but neither side looked like winning the game late on. 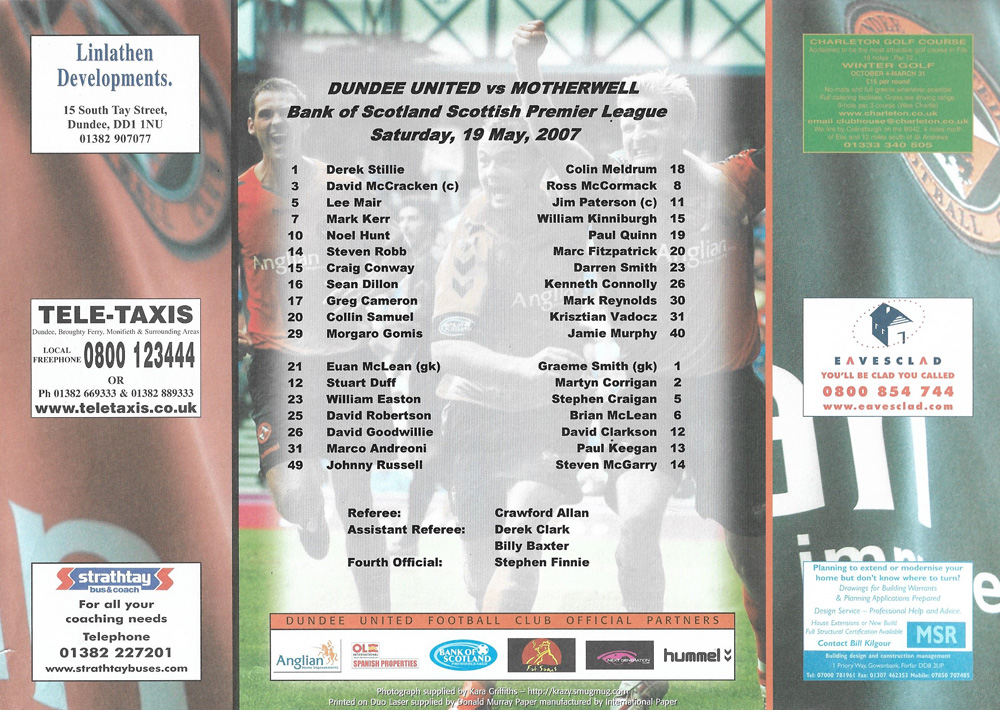