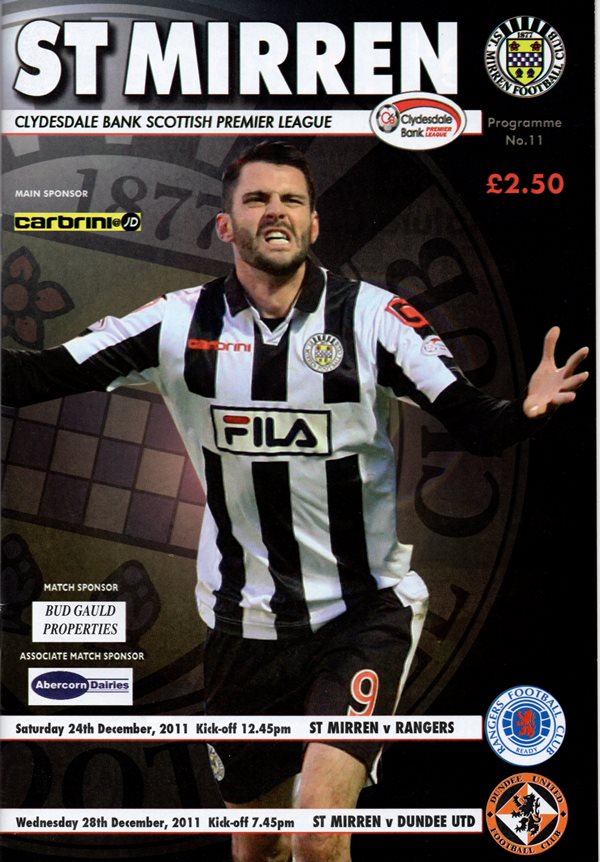 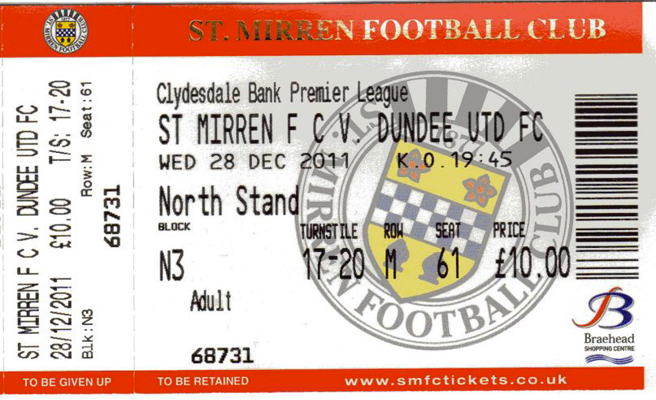 Both teams were going into the game in confident mood and each started with the same starting 11 that had won them three points at the weekend.

The pace of the match was set from the start and, within a minute, United had earned a corner and had a good penalty claim turned down. Gary Mackay-Steven, who had earned the corner with some stubborn play on the left, played the ball short to Rankin, whose cross into the penalty area was blocked by St Mirren defender Jereon Tesselaar, with strong claims behind the goal that he had used both hands to block it. United were enjoying much of the early possession and had another chance when Jon Daly turned well on the edge of the box then fired in a shot that was well held by Craig Samson. St Mirren, buoyed by their weekend victory over champions Rangers, then tried to pick up the pace and Aaron Mooy, the club’s Christmas Eve Day match winner, showed some good footwork on the edge of the box before snatching at an effort that spun just past the post. Paul McGowan then cracked in a shot that spun wickedly in the severe wind, causing Pernis to palm the shot away. Despite the horrendous conditions, both teams were creating chances and United came close when Mackay-Steven bore down on goal only to be blocked by Lee Mair. The wind was starting to play havoc and a Steven Thompson cross from the left looked to be heading for the far post before spinning out of control and nearly beating Pernis, causing him to palm the ball behind for a corner. Then a crazy seven minutes of exhilarating end-to-end action brought about four goals to heat up both sets of fans on an otherwise freezing evening. First, the home side took the lead with nearly half an hour on the clock, and, yet again, the weather played a part. Carey tried a shot from the edge of the box that was heading well wide before being diverted goal wards by stand-in skipper Steven Thompson and beyond Pernis. United, who are used to fighting back from behind, having done so in the previous three matches, tried to hit back instantly and a Paul Dixon drive came close before they did get the equaliser, with Paul Dixon – a constant threat on the left – swinging in a perfect cross that was side-footed home by skipper Jon Daly. St Mirren replied instantly with a spectacular long range effort by Graham Carey after some good close passing to leave Pernis with no chance. Incredibly, United responded instantly again, with Gary Mackay-Steven chasing a lost cause that looked to be rolling out for a goal kick and swinging in a cross from the touchline that was headed home by Stuart Armstrong. As the game neared the end of a thrilling first half, a good ball from Stuart Armstrong found Mackay-Steven, who turned and drilled in an effort that Samson had to be alert to. A thrilling first half with two teams that wanted to defy woeful conditions by playing attacking and attractive football. Going in level was a score neither sets of fans could complain about after an end-to-end 45 minutes of football.

United started the second half well and Mackay-Steven embarked on a bursting run before blasting in an effort that went just wide of Samson’s right hand post. St Mirren then came close through a long-range effort by right-back David van Zanten that went just wide. John Rankin seemed to be the first United player to learn from the home side’s approach of firing in long-range efforts that test the keeper in the wind and rain, with the midfielder fizzing in a 40 yard effort that was tipped wide by Samson. An effort by Scott Robertson, sporting a Garry Kenneth-style skinhead, then smacked off a St Mirren player, leading to strong claims again from the United following for a penalty. After that, United lost the momentum as the home side played a lot of tidy football that gave them the edge. Pernis had to be alert to stretch to reach a skilful chip from Paul McGowan, then United had Gavin Gunning to thank for keeping the score level when he got in just in front of Thompson to send a drilled cross over the bar. And Graham Carey passed up a glorious opportunity when he failed to get his head to a perfect cross from the right. With the home side appearing to have won the upper hand in the centre of the midfield, manager Peter Houston brought on youngster Scott Allan for Armstrong midway through the half, but he struggled to turn the game United’s way despite a switch to a 4-2-3-1 formation. With seven minutes to go, John Rankin doggedly dodged a few challenges before chipping in an effort that dipped just wide, then United withheld some late pressure to hold on for a draw that neither manager is likely to be too unhappy. United’s 543-strong support will have gone home relatively happy after seeing a lot of positives in an entertaining match. Again, there was no shortage of chances created by the side but in the end the weather had the beating of the side and caused the players to tire towards the end of the game.