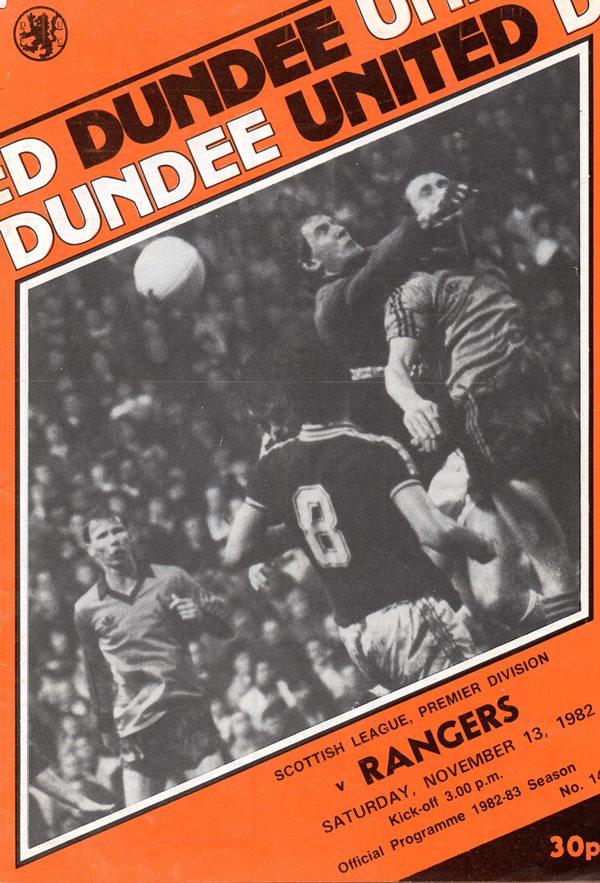 United went into this game defending an undefeated home record. There was a big crowd in Tannadice on a chilly November afternoon to watch the match.

The first half hour was fairly even with both sides struggling to test the opposition 'keeper's. The first goal eventually came in the 31st minute. McAlpine threw out to Malpas on the left side. The young full-back made a progressive run towards half way before releasing Sturrock on the left. He was able to evade his marker before chipping a lovely ball to the back post. Ralph Milne was streaking in towards goal and got on the end of the cross to head Jim McLean's men ahead. Despite the lift, Davie Cooper equalised for Rangers just two minutes later. He diverted a headed effort beyond McAlpine from 6 yards.

The game opened up in the second half and Derek Johnstone put the Ibrox side ahead mid-way through the second-half. He headed home a Davie Cooper left-footed cross. However, Davie Dodds equalised six minutes later, when he pounced after the Ranger keeper fumbled a long range effort. The big striker was first to react and slam the rebound home. With the wind behind them and shooting down the hill, United pushed forward in search of the winner. The had to wait until just four minutes left before they finally got it. Richard Gough slammed home the winner from outside the box and went racing down the touchline to celebrate. Rangers had to take a chance now and that they did. With a number of their players stranded upfield, Ralph Milne's broke away and raced in on goal before dispatching a brilliant solo effort into the top corner to cap a fine victory.

In pursuing my ambition to see improvement in all aspects of Dundee United, this column is, perhaps, adopting a far too familiar theme this season in that, week in week out, you are being subjected to my moans. This is basically because I feel that it is important to be honest at all times. This is an essential feature, in view of the support you, the fans, have given, particularly in the last couple of seasons. Even on Wednesday night I was very disappointed with the performance of a couple of players. The other nine, though, not only played to the standard I expect, but perhaps even surpassed my expectations, by outclassing one of the four best sides in Scotland. That was a magnificent achievement. Unfortunately for players and fans alike, it was a great disappointment not to reach a fourth successive League Cup final. I only hope the final is at least as good as the recent Old Firm league encounters. I think I can state without fear of contradiction that the final would be equally attractive had it been contested by United and Rangers.

In my opinion some of Scotland's best players will not be taking the field in the League Cup final with both United and Aberdeen not involved. I do, however, have one criticism to make — we are far too dependant on Paul Sturrock. If he is injured or off form our performances suffer. In saying that, Paul has been more than ably assisted by Davie Dodds in the most demanding department in the modern game. Rarely have I been as sorry to omit a player as I was on Wednesday night when Derek Stark was left sitting on the bench. Derek is a 100% player but I felt that Maurice Malpas has, in recent matches, handled Davie Provan better than Derek. However, it grieves me that I had to leave a good player on the bench when we are so short of quality players up front. I am certain that the players must think they have become mountaineers this season with the succession of mountains they have been asked to climb. After Wednesday night's epic, they must now face a Rangers' side who, in my opinion, have improved greatly. Nonetheless, both United players and fans alike certainly need the right result this afternoon.