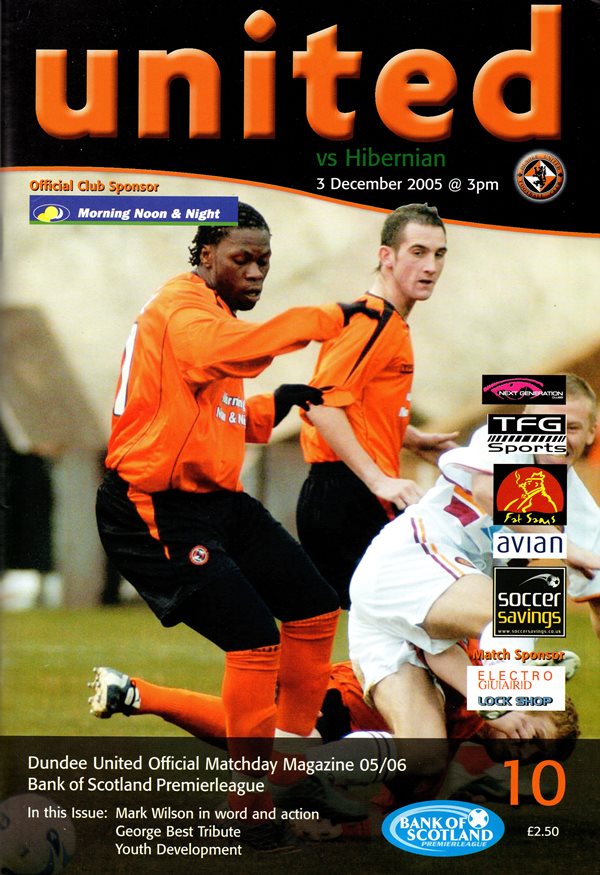 Hibs went into the game on the back of a fine 2 – 1 win over Rangers, with manager Mowbray describing his side’s first half display against the Ibrox club as probably the best since his tenure began. So Hibs were most certainly the bookies’ favourites for the three points – but Mowbray himself had warned that his side’s inconsistency ruled out any chance of a Championship challenge, and it was that prediction which proved the more telling in this game. In his programme notes Gordon Chisholm declared himself happier with his Dundee United side’s defending in recent weeks, but bemoaned the fact his defenders always seemed to be holding onto delicate single goal leads. Nevertheless, the manager welcomed back Paul Ritchie into the centre of his defence after suspension. With Grant Brebner failing to recover in time, utility man Stuart Duff was pushed into a central midfield position, Barry Robson reverting to his more accustomed left midfield role, and Jim McIntyre dropping onto the bench. Hibs lined up in a familiar 4-5-1 formation. Stephen Glass kept his place on the left side of defence in the absence of David Murphy. O’Connor continued as the lone striker looking to get support from Brown, Riordon and Shiels from midfield.

In the opening stages there were encouraging signs that the forward pairing of Miller and Samuel could reap dividends for United, with Miller proving a handful in the air, providing flicks and knock-downs for Samuel to get on the end of. On six minutes Samuel was able to return one of Miller’s flicks back to him; Miller’s shot was blocked, but he then set up Kerr whose strike from twenty-five yards was off target. Five minutes later another flick from Miller provided Samuel with a chance but his shot was deflected wide for a corner. United were certainly enjoying the upper hand in the opening stages, but with Hibs failing to get men forward with their usual fluency the midfield became congested and goalmouth action was rare. Scott Brown tried to kick start his side into action after a quarter of an hour starting off a nice passing move – then finishing it by blazing the ball high and wide of goal from just outside the box. On twenty minutes a goalkeeper was called into action for the first time, Derek Stillie having the easiest of tasks, catching an O’Connor header from twenty yards. The game continued to be punctuated all too regularly with offside flags and wasted set pieces. However one fine piece of skill on twenty-seven minutes almost gave United the lead. Receiving a quick free kick from Robson, Kerr looked up and picked out Miller with a chip to the far post. The knock down was beautifully controlled by Samuel on his thigh before lashing a left foot volley just past the far post. Mark Kerr then picked up the first caution of the game after a clumsy challenge on Brown. Frustrated by his team’s failure to get out the starting blocks, Hibs manager Mowbray started tinkering with his side, switching Riordon from left wing to right, and Shiels going the other way. For whatever reason, the switch seemed to open the game up with Shiels in particular pushing much further forward. On the half hour mark it was Shiels who was presented with a great chance, getting on the end of a pinpoint Scott Brown cross, but blasting over from six yards. United too looked more dangerous now and Duff sent Fernandez clear. His finish was poor though, with Malkowski having the easiest of saves. Two minutes later Shiels was almost able to make amends for his earlier miss but Riordon’s cross was just too far ahead of the young Englishman to allow him to get enough on the ball which trickled agonisingly wide. Five minutes from the interval, Malkowski had to dive to his right to make a superb save after a twenty-five yard Stuart Duff drive looked to be heading low into the net.

Goalless at half time – but the game was shaping up for a more entertaining second half. The teams emerged for the second half with no changes in personnel, and indeed Riordon and Shiels were back in their original positions. But unlike the start to the first half, the tackles were now flying in and this was a faster and more competitive affair altogether. Shortly after the break Hibs made their first enforced change, Steven Fletcher replacing the injured Beuzelin. Stephen Glass picked up a yellow card for a bad tackle on Fernandez. Shiels had his third good chance after fifty-five minutes, but panicked when through on Stillie, sending a shot well off target with team mates much better placed to tap the ball into the unguarded net. Stillie then made a magnificent save to deny Brown after United were far too slow to react to a quick free-kick. For the first time Hibs looked like they were getting on top and Stillie did well to punch away a dangerous Riordon free kick. But on sixty-one minutes the visitors found themselves a goal in arrears. Not for the first time of the afternoon Miller’s head flick from Stillie’s clearance was perfectly placed and Collin Samuel showed great pace to break clear of the Hibs back four and shot home powerfully. United have recently been guilty of letting leads slip too easily, and it almost happened again here. Within a minute, a dipping Steven Fletcher header beat Stillie – and rebounded from the crossbar. For a period United sat back too deep and Steven Whittaker was allowed too much room to come forward from right back – his deflected shot was just held on to by Stillie. But after that sticky spell some fine defending restricted the number of chances created by Hibs. Thompson was booked for a bad challenge on Robson, before Mowbray reorganised his side, again switching Riordon to the right wing, and this time taking off Shiels and putting on Jamie McCluskey on the left. United too re-organised, McIntyre came on at left midfield, Robson moving into the middle, and Duff switching to the right with Fernandez going off. McCluskey was lively for Hibs, but United were looking increasingly comfortable at the back. With fifteen minutes left, Gary Caldwell’s side-footed effort was just over. Riordon came close with a thirty-yard free kick (after Robson had been booked for not retreating ten yards) but as the clock ticked away Hibs continued to struggle in the final third. With nerves beginning to take their toll, United almost provided them with a helping hand but Stillie made a superb reaction save when Fletcher’s cross appeared to be deflected towards his own goal by Duff. An injury time counter attack saw Samuel head narrowly wide after a cross from substitute McIntyre.