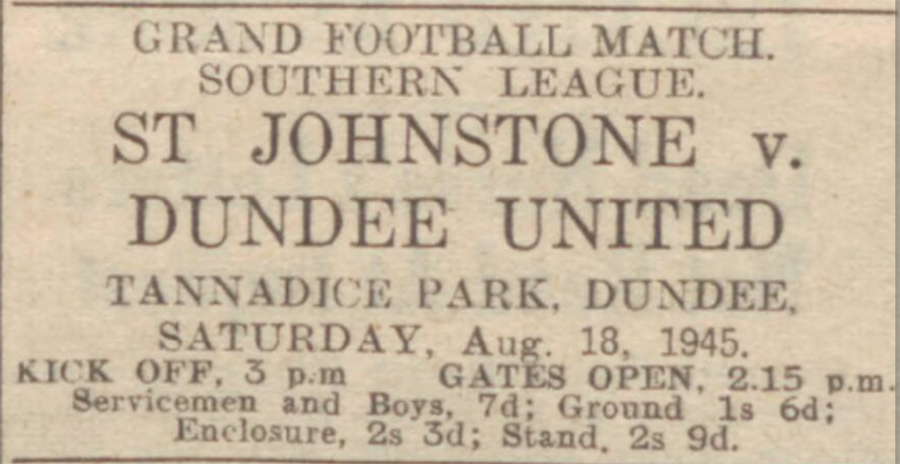 United looked to make amends for their East End Park humiliation with a home win against their Perth counterparts, St Johnstone, but, despite a second half fightback, they finished the match at the bottom of the league table with, as yet, no points.

At centre half, the former St Mirren player Willie Kelly made his debut for United and got off to the worst start, selling a goal in four minutes, leaving McIntosh unmarked for the Saints' centre forward to collect a pass from Burns and score the opener. By the half hour mark the visitors had a three goal lead, McIntosh doubling his own tally and Gillies getting in on the scoring. United were very poor, but the fighting spirit was there, and with that they got up steam and pulled a goal back before the interval thought Ian Hay. Midway through the second half, Piper MacKay scored another and Hay hit a leveller on 67 minutes to make it 3-3. United had staged a grand comeback. A win was not to be though as McIntosh secured his "hat-trick" and won the match for Saints late on.

With the fight they gave during the game, United showed the makings of a good team. The whole team appeared to be out of gear in the first half. It was after the crossover that the homesters wakened up and supplied that eagerness and dash (plus some good football) that was entirely lacking earlier in the game. Kelly did not look as fit as he might have been, owing perhaps to not having played regularly for the past two seasons while serving with the Navy. United's trialist at outside left, unnamed, showed flashes of snappiness in the second half too. Hay promised well too. For Saints, Lamb, Boyd and McIntosh were best. A few others showed promise. Burns in particular had poetry in his passing, while Ireland and Soutar had punch but no poems.

Report adapted from The Sunday Post, The Evening Telegraph and The Courier and Advertiser, Sunday, August 12 and Monday, August 13, 1945.