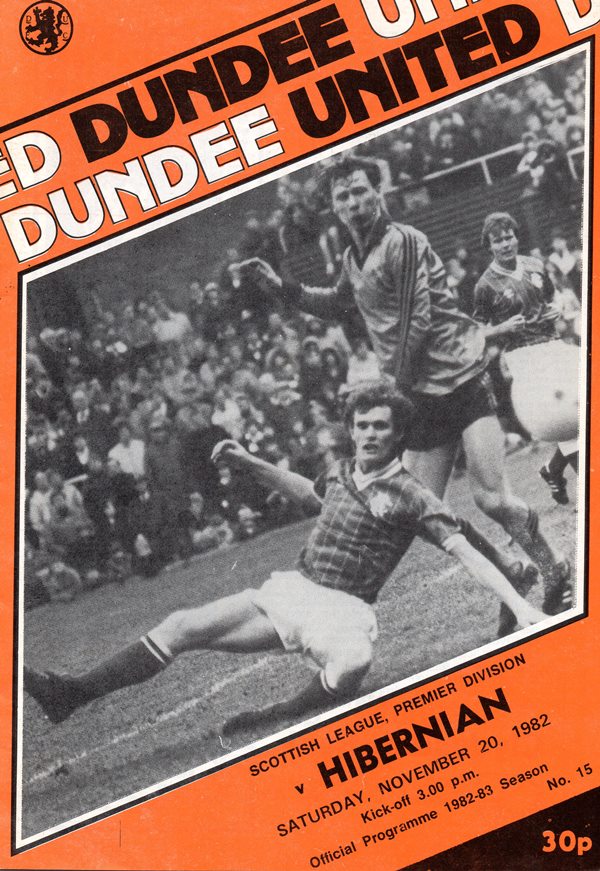 Striker Paul Sturrock, who was doubtful because of a knee injury sustained in Switzerland playing for Scotland, was passed fit prior to kick-off, so manager Jim McLean was able to field an unchanged side from last weeks win over Rangers.

After an early scare, United almost took the lead when Sturrock latched on to a Davie Dodds flick just outside the box and his vicious effort was brilliantly held by Jim McArthur. United then had strong appeals for a penalty turned down after Dodds was nudged by Mike Conroy in the box. In the 19th minute Billy Kirkwood was unlucky to see his lob over McArthur hit the crossbar and bounce over. It was all one way traffic, but United just couldn't find that breakthrough, with Arthur Duncan clearing a Richard Gough flick off the line after Eamonn Bannon's corner kick. Hib keeper McArthur suffered a bad ankle gash in a clash with Sturrock which saw play held up for five minutes whilst he received treatment. United eventually got the opener in the 34th minute when Eamonn Bannon side-footed a Sturrock cut back past the helpless McArthur.

Having received nine stitched to his cut ankle during the interval, the Hibs keeper soldiered on, and kept the Edinburgh side in the game with a number of saves. However, he was finally beaten again in the 75th minute. Derek Stark and Richard Gough combined to set up substitute John Reilly, who shimmied away from two defenders and delicately curled the ball into the far corner of the net. Two minutes later Davie Dodds was unmarked to turn in another Sturrock cross.

Although winning by three clear goals, manager Jim McLean was far from happy with the performance, and after the match fined most of the players a substantial sum because they "did not give the customers what they paid to see."

I am sure that all the fans who attended our last two home matches would testify that last Saturday's victory over Rangers capped a memorable week in many ways, providing as it did a double over the "Old Firm" in the space of four days. It was a great achievement but, like myself, most of you will have felt the bitter disappointment of defeating Celtic yet failing to qualify for the League Cup final. One of the most pleasing aspects of the last fortnight was the manner in which the players shrugged off that 5-1 reversal at Pittodrie. Not since the replayed Scottish Cup final defeat had I seen so much despondency in the camp. The way the players responded is, I think, proof of the improvement in Dundee United. In mid-week we had six players involved at all levels of the international squads. In addition, Wattie Smith would have assisted youth coach Andy Roxburgh in Monaco had club commitments not kept him at Tannadice. It is heartening to the directors, scouts, coaching staff and myself to see our efforts rewarded by such recognition. It is also testimony of the directors dedication to keep our best players at Tannadice. Their retention is required to speed up the development of young players. I am more excited about the progress of the club than ever before. Youngsters like Dave Beaumont, Gary McGinnis, Jimmy Page, John Clark and Alex Taylor are all pushing for contention in the first team and most gratifying is the fact that the latter trio are forward players, a department in which we badly need greater depth. Make no mistake, we will be looking to the younger players already here at Tannadice to strengthen our pool. I have found it impossible to bring players of the required standard to Tannadice from other clubs, either because exorbitant fees have been quoted or proposed player exchanges haven't been mutually acceptable. We must, therefore, rely on our existing staff to supplement the first team squad.

I am hardly noted for being extravagant with the players but I have given Paul Hegarty, Davie Dodds, Derek Stark and Billy Kirkwood a few days off this week after our recent hectic programme. They required a break whilst the remainder of the players on international duty should have been stimulated by the different atmosphere at that level. Looking ahead, we still have next Wednesday's U.E.F.A. tie against Werder Bremen to maintain our European involvement, but before turning our thoughts to that match we face Hibs in the most important tournament of all — the League. We therefore accord a welcome to Pat Stanton who is making his first visit to Tannadice as Hibs boss. Scottish football badly needs a successful Hibs and Hearts side as they have the potential to make the inroads into the "Old Firm's" supremacy in the same way as United and Aberdeen have done. I am sure that is Pat Stanton's aim too, though I have no wish to see a repeat of the scoreline on Hibs' last visit in April when the Easter Road side won 1-0 to record their first ever premier success on this ground.