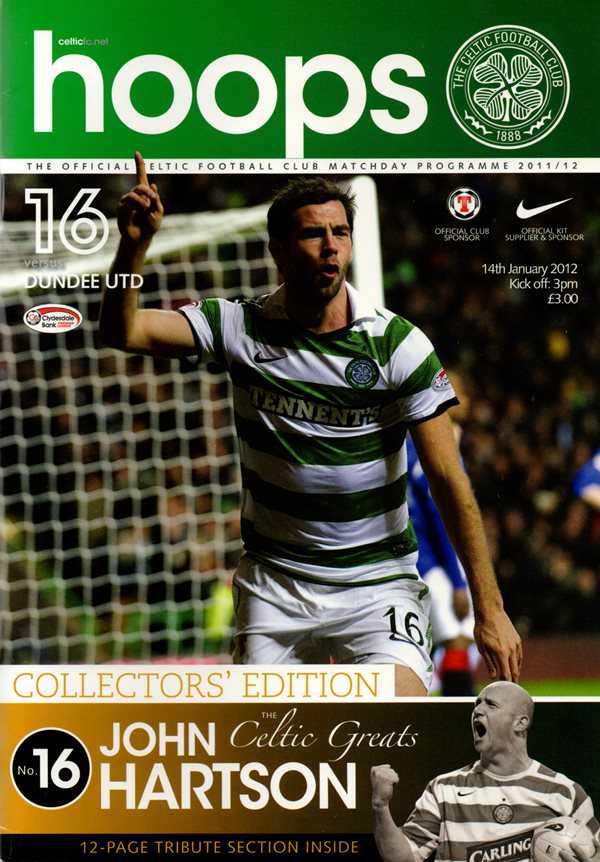 Matching up with the home side’s 4-4-2 formation, manager Peter Houston made only one change to the starting eleven that won so convincingly at Airdrie the previous week: with Neilson returning at right back, Flood pushed into midfield and Armstrong dropping onto the bench. Celtic made 5 changes to the side that recorded a comfortable cup win at Peterhead – Forster, Matthews, Rogne, Wanyama and Hooper all returning; Zaluska, Kelvin Wilson, Cha Du RI, Ki and McCourt all named as substitutes.

Celtic started purposefully, dominating possession in the opening stages but a Stokes free-kick from 25 yards straight into the defensive wall was all they had to show for it by the time the visitors carved out the first real opportunity of the game. Mackay-Steven’s cross from the left was mishit by Robertson, but Kenneth – still forward after a corner – volleyed goalwards from a difficult angle, forcing Forster into a sharp save. United forced a number of corners but just as it looked like they were getting a foothold in the game they found themselves trailing on twelve minutes. United conceded possession – instantly Stokes was able to put Gary Hooper in behind the defence and the striker expertly lofted the ball over the onrushing Pernis into the top corner. Just four minutes later and the lead was doubled. United were caught napping as Samaras took a short corner. Izaguirre’s cross from the left picked out Wanyama’s late run, and the midfielder bulleted an unstoppable header past Pernis from 8 yards. Much of the remainder of the half saw Celtic content to play keep ball and appearing content to sit on the two goal cushion. When the occasional set piece opportunity presented itself, they were generally well defended – though Rankin picked up a caution for encroaching on a Stoke free kick nine minutes before the break. But as the interval approached there were half chances at each end. An excellent move from United up the left ended with Daly sending a powerful shot just off target from the edge of the box. At the other end a lovely floated cross from Samaras picked out Hooper at the back post – surprisingly he tried to head back across the six yard box instead of going for goal and Kenneth was able to put the ball behind. From the resulting corner Stokes glanced a header narrowly wide. Stokes was involved again forcing Pernis into a good save with a powerful volley from the right edge of the penalty area. Though United had enjoyed one or two decent spells, it was a pretty disappointing half for the visitors with Celtic looking comfortable.

United replaced Flood with Armstrong at the interval but from the way Celtic started the second period it seemed clear that Neil Lennon’s half time instruction to his side was to go looking for a killer third goal. A Mulgrew free-kick forced Pernis into a save, low to his left. Soon after, the keeper was back in action to beat away a powerful drive from Samaras. The Greek striker should then have done better than to blaze over from 20 yards after being teed up by Brown. But the match took on a whole new complexion on fifty minutes as John Rankin brought the visitors right back into the game. The midfielder’s stunning low strike from at least 35 yards rattled Foster’s right hand post before nestling in the back of the net. Suddenly United were pinning an increasingly nervy Celtic back and soon after the goal Forster did well to tip Daly’s header over from a superb Dixon cross. When the resulting corner was only half cleared, Armstrong put a difficult chance narrowly wide.
United suffered a blow with Paul Dixon forced to limp off, being replaced by Douglas with twenty five minutes remaining. At the same time, Celtic brought on Ki to left midfield with Samaras pushed up front and Stokes taken off. Still the visitors pressed forward in search of an equaliser. Super play between Robertson and Armstrong finished with a lay off to Russell in the six yard box – but a close offside decision ended the move, with Forster quick off his line in any event. The home side remained dangerous on the counter and Samaras perhaps should have done better than head straight at Pernis when picked out by Matthews. With the game approaching the final ten minutes, Swanson replaced the tiring Mackay-Steven for United, and Commons was introduced in place of Izaguirre, Ledley moving to left back. By this stage Celtic had regained their composure and but for Garry Kenneth’s last ditch intervention, Ki might have added a third. In a sign of frustration, Sean Dillon was cautioned in stoppage time for a kick at Hooper as he desperately sought to regain possession. Try as they might, United were unable to force that one clear cut chance that could have capped an excellent second forty-five. An excellent second period from United – but not quite enough to overcome the first half deficit.