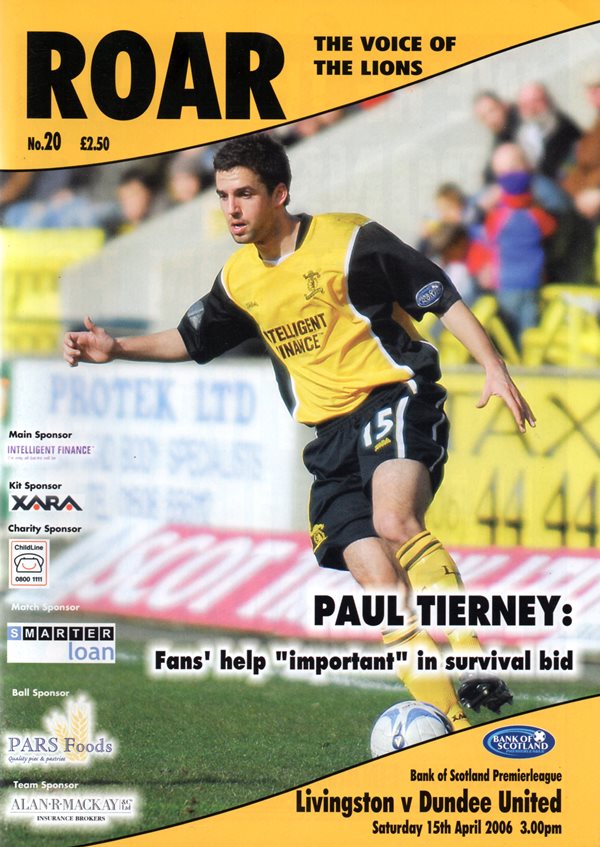 An early goal in each half by Sam Morrow and Harold Pinxten – both of them highly preventable from a defensive point of view – meant that United had given themselves a mountain which they never looked likely to climb. Although David Robertson’s effort had levelled the scores in the first half, an injury time penalty from Richard Brittain gave some gloss to the scoreline from a Livi point of view and a victory which could prove crucial at the end of the season.

There was only one change to the teams’ starting line-ups from their previous games against Falkirk and Inverness respectively, with David Robertson replacing David Fernandez for United, and David McNamee replacing Paul Tierney for Livi.

United started the match as flat as they had played for much of last week’s match versus Falkirk, and despite a let-off when Mackay shot straight at Samson after capitalising on having two United players in the left back area stop, they found themselves a goal behind within the first 8 minutes.

After holding off Archibald with ease when receiving a regulation long ball forward, Whelan laid off the ball to Healy. The Irishman looked to play in Sam Morrow, but the ball looked to be going safely through to Samson before Kenneth got a touch on it, which made for a three way challenge between Morrow, Kenneth and Samson. The ball broke beyond the two United players, allowing Morrow to get up and slot home the loose ball.

However, the away side drew level with their first real purposeful attack in the 19th minute. Barry Robson played the ball wide for the overlapping Mulgrew, who crossed low for David Robertson to nip in at the near post and poke the ball beyond McKenzie.

Mulgrew burst forward again in the 40th minute and, after nutmegging Brittain on the touchline, swung in which fell to Brebner on the far side whose cross found Samuel on the left angle 12 yards from goal, but the striker blazed over.

United again gifted a ridiculous goal early in the second half which provided Livi with the lead for the second time in the match. After completely missing an attempted punch on Brittain’s cross following a free kick, Samson clattered into McCracken, leaving Harold Pinxten with surely the easiest goal of his career by half tapping into an unguarded net from a yard out.

After Samson saved Healy’s 18-yard volley from Hoolahan’s corner, United came back into the game with Barry Robson seeing his powerful 20 yard shot deflected wide on the hour and, after the resultant corner had been half cleared, Samuel jinked inside two defenders before firing wide from the edge of the area.

Roddy McKenzie then stamped his mark on the game, bringing off some fine stops to protect his side’s precious lead as they seek to avoid relegation. The first of these came from a trademark Charlie Mulgrew free kick from fully 30 yards, for which the keeper dived high to his left to claw away from the top corner.

Further stops followed from headers from Ritchie and Robertson, a cut back and a powerful shot from Samuel.

Samson did well to turn Hislop’s shot wide in the final minute after the substitute had rounded the keeper, but Richard Brittain provided the killer blow with a penalty kick in stoppage time after Hislop had been felled in the area.