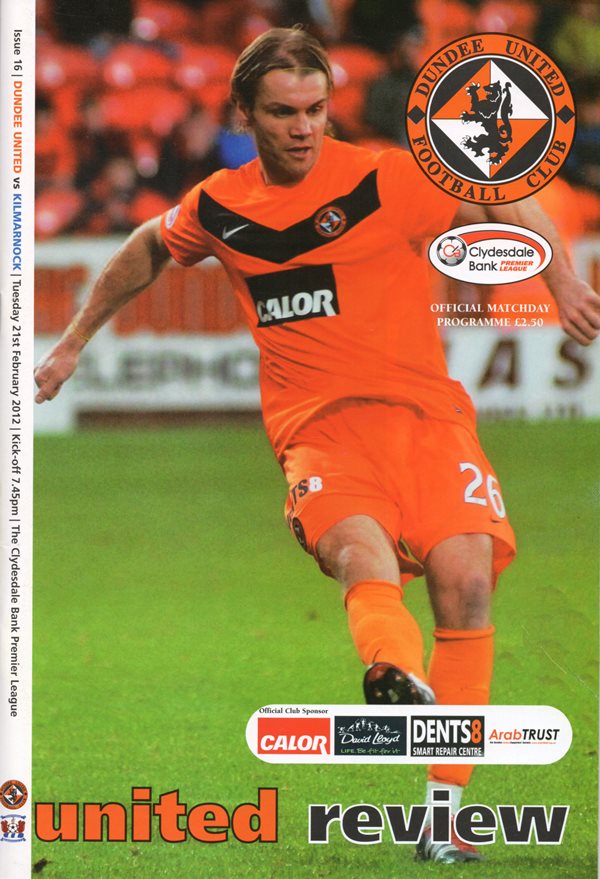 Peter Houston made one change to his starting line-up from the side which had drawn 0-0 at home to St Mirren at the weekend with Willo Flood coming in for Stuart Armstrong.

It took six minutes for the game’s first real goal-scoring opportunity to occur. Johnny Russell played a neat flick-on to Scott Robertson who squared the ball to the unmarked Jon Daly – however, the Irishman’s outstretched leg could only send the ball over the bar from eight yards out. Willo Flood, returning to the starting 11, was looking lively, and United were dominating possession in midfield – however the game was bereft of genuine goalmouth action. Referee Craig Thomson brought his cards out for the first time in the 14th minute, with Killie defender Lewis Toshney booked for a reckless challenge on Paul Dixon that left the United full-back moving gingerly for several minutes afterwards. Four minutes later Russell tested Kilmarnock ‘keeper Cammy Bell from 16 yards following a long throw into the box from Robbie Nielson, but Bell was equal to the United striker’s low drive. United created a half chance three minutes later when a high ball into the box from the industrious Flood was missed by Bell before the away rearguard cleared their lines with Daly looking to make contact. Killie’s first shot on target came in the 24th minute, with Garry Hay curling a free kick from the right that Dusan Pernis saved comfortably. United nearly took the lead a minute later, with Neilson making a terrific run on the right hand side, evading two Killie players before passing to Russell who blasted a shot just wide of Bell’s right hand post. Russell was again involved after half an hour, getting on the end of a low Dixon cross from the left, but from an impossibly tight angle the ball travelled high and wide of the Killie goal. In the 38th minute Daly hit a well-executed half-volley from the edge of the box that momentarily unnerved the encroaching Bell, with the ball flying just over the crossbar. Just before the break United created an excellent chance to take the lead. Following good link-up play on the left, Russell squared the ball to Daly in the box, but the United captain appeared to be slightly off-balance and his shot flew wide of Bell’s left-hand post. Half time: 0-0.

United continued to attack early in the second half, and John Rankin tested Bell’s reflexes with a terrific strike from all of 25 yards, with Bell doing well to tip the ball over the bar. From the resulting short corner, Rankin found space in the box before hitting a powerful strike that looked goal-bound until the Kilmarnock number one made another excellent save, with Robertson just failing to connect with the subsequent rebound. In the 51st minute United created another chance, with Flood’s cross well-controlled by Russell in the box. The United forward made room for a shot, but Bell was again quick to respond, coming quickly off his line to block the shot. The game sparked into life in the 56th minute. Russell connected with a long ball up the park and his flick on freed Gary Mackay-Steven in the box. The United winger, one-on-one with the Killie ‘keeper, was felled by an awkward challenge by Liam Kelly. The referee pointed to the spot, and Kelly was adjudged to have prevented a clear goal-scoring opportunity and shown a straight red card. Jon Daly stepped up to confidently strike the ball home from 12 yards with a shot to Bell’s left. Two minutes later, United made it two. Paul Dixon was given too much space and time on the left and the United left-back struck a fierce drive from 25 yards that flew into the Killie net. Great strike that it was, Bell perhaps should have dealt with it better. United were threatening to run riot now, and Daly almost made it three two minutes later, just failing to meet a low cross from the left, before Bell clumsily cleared. Mackay-Steven then went close with a powerful drive from the edge of the box that Bell parried to safety. To Kenny Shiels’s credit, having introduced another forward in Dieter van Tornhout meant he left three strikers on the park despite being reduced to ten men. However, this adventurous approach was leaving his defence woefully exposed, and United were creating chances seemingly at will. Dixon looked to get his second in the 67th minute, but his low drive from the left clipped the outside of the post before going out for a goal-kick. Three minutes later Rankin tried his luck from distance, with Bell tipping wide for a corner. From the subsequent set-play, the Killie ‘keeper punched clear in unconvincing fashion, and the ball fell kindly to the impressive John Rankin who lashed the ball home to put United out of sight. With 15 minutes remaining Milos Lacny was introduced, and just a moment later Russell hit a shot from outside the box that just evaded Bell’s left-hand side. A minute later, Mackay-Steven went through on goal following a deft chipped pass from Russell, but his shot was held by the Killie ‘keeper. Scott Robertson then made it 4-0 in the 84th minute. The United midfielder played a neat one-two with substitute Stuart Armstrong on the right before drilling a low drive past the despairing Bell. The rout was complete. It was exhibition time now, and to the chants of ‘ole’ from the delirious home end, United were playing keep-ball, with Kilmarnock thankful to eventually hear the final whistle. An outstanding second-half display from United, with the aid of some good fortune in Kelly’s dismissal, saw United demolish Kilmarnock in one of the best performances of the season

I described last Saturday's match as brutal - not the players - and whilst they can play better, I couldn't fault their attitude against St Mirren. The problem was that we didn't create enough to win and being honest I reckon a draw was a fair result. There were so few efforts on goal neither goalkeeper needed their gloves. I was happy with the back four and it was a good clean sheet, but from middle to front I think we can definitely improve. None of the quality that was on show at St Johnstone the previous week was evident. We wanted five or six passes before putting the ball in the box. I always tell the players to put it in there as we have Jon Daly and Johnny Russell to aim for. When we did that against St Johnstone they both scored with headers. Overall, it was a disappointing performance, especially as after two good away results we wanted to build a bit of momentum at home. On the evidence of last Saturday, we have a bit of work to do. The players' application is something I can always rely on. They did their level best to beat St Mirren and I know it will be the same tonight against Kilmarnock. It must be remembered we are in a transitional period and have a lot of young players. Inconsistency inevitably accompanies such a scenario, but to be fair to the players, the levels of performances have been generally good. But we'll certainly need to up the ante from Saturday against Kilmarnock this evening. Particularly as Kenny Shiels' side will be boosted by their victory at Ibrox at the weekend.

That win cost us a place in top six, but if we can get the right result this evening, we'll jump back above then and into the top six. Not that we are settling solely on finishing in the top half, because our trip to Tynecastle on Saturday, afford us the opportunity of climbing to fourth. However, first things first and we know who hard it will be against a Kilmarnock side with whom we have shared the spoils in the two previous meetings. But hopefully, we can go one better and get our home form back on a winning track.