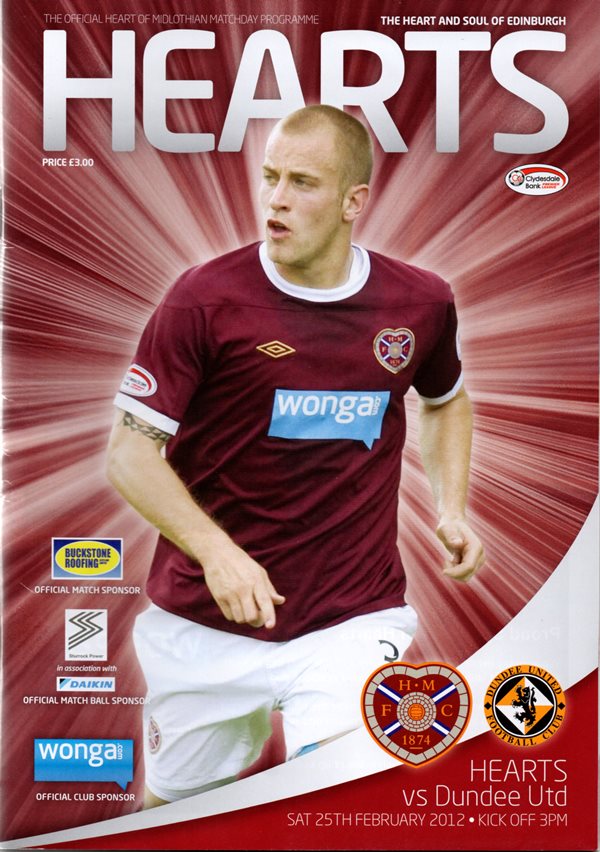 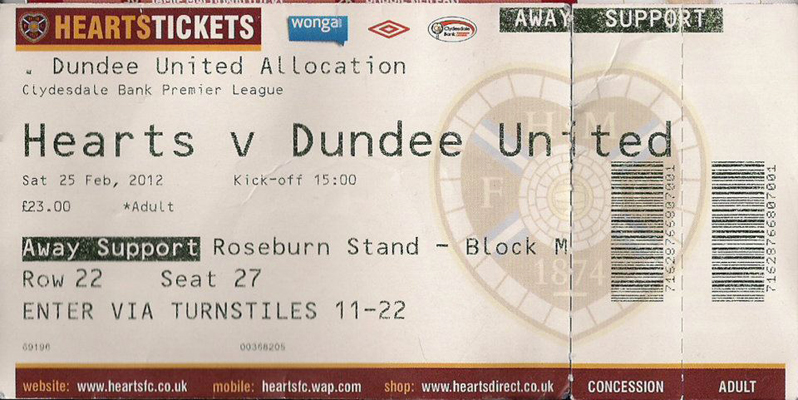 On an afternoon that started off sun-kissed and spring-like before turning colder and windier in the second half, manager Peter Houston made only one enforced change from the emphatic midweek victory over Kilmarnock, with left back Barry Douglas replacing the suspended Paul Dixon.

Hearts were the first to threaten, with Rudi Skacel, playing in an advanced midfield role not far behind lone striker Stephen Elliot, firing in a 25 yard effort that Dusan Pernis had to palm away and collect at the second attempt. The home side then threatened again, with Scott Robinson seeing a shot from the left edge of the United box being turned behind for a corner by Pernis in a period during the first 10 minutes where United struggled to get into the game and a lot of passes went astray. The Gorgie side then missed a glorious opportunity when David Obua nodded down for Stephen Elliot on the edge of the six yard box. The striker turned well but, with the goal gaping, he fired his effort straight at Pernis. United’s first chance came after 17 minutes when Willo Flood lofted in an inviting corner that Gavin Gunning met well with a header, which took a deflection before being tipped over by Hearts keeper Jamie Macdonald. Within a minute, Hearts picked up their momentum and a threatening cross-come-shot from the right nearly deceived Pernis, who had to be alert to tip over. While both sides had shown plenty of endeavour in the centre of the park, they had struggled to really get their creative players into the match in the first half. The home side, though, continued to look the more threatening, albeit their attempts on goal were largely restricted to long range attempts, with Ian Black twice bringing Pernis into action with long-range drives. United’s chances had been few and far between, although Douglas had provided fairly dangerous crosses into the box from deep on at least two occasions that Jon Daly had nearly got on the end of. But with only three minutes until the interval, United took the lead and it was down to that very same combination: Douglas flighting in a dangerous ball from the left to the back post, where Jon Daly stooped low to glance a header beyond Macdonald. The game really burst into life in five minutes of first half injury time, with Pernis blocking Elliot before the striker arched in an effort that Neilson headed off the line, then United broke with Mackay-Steven, who tried to send Russell clear only for Jamie Hamill to get in a last-ditch block that stopped a clear goalscoring opportunity. Leading 1-0 at half time United were understandably delighted to go in ahead following a first half where they had struggled to create clear-cut chances, but had also restricted the number of chances Hearts could create despite the home side having more of the possession.

Hearts tried to get the crowd back on their side early in the second half and they had them shouting for a penalty when Danny Grainger drove into the box and went down following a challenge by Robbie Neilson, but referee Calum Murray had no doubt that he won the ball. Obua then tried a speculative long-range effort that didn’t cause Pernis too many concerns as it sailed over the bar. Hearts fans were howling for a red card 10 minutes into the half, when Grainger went down following a challenge from Willo Flood, who was booked. It was becoming rather temperamental, and Neilson soon followed the Irishman into the referee’s notebook following a high challenge in the centre of the park. United, though, would take comfort from the increasingly anxious home support, who were repeatedly getting on their players’ backs as a result of the number of poor deliveries into the box. In an effort to change that, Paulo Sergio brought on creative wide player Andrew Driver for the ineffective Obua but United had tightened up the midfield with the addition of Stuart Armstrong in place of Johnny Russell and were able to continue to frustrate Hearts with a disciplined and organised performance, where commitment and determination were making up for any shortage of creativity and penetration. Hearts somehow failed to get an equaliser in a frantic moment of attacking play, with Pernis first saving from Skacel before Elliott turned the ball towards goal only for a heroic goal-line challenge from the impressive Gavin Gunning. Hearts had their tails up and were now bombarding the United goal as the game neared its final 10 minutes. Yet, despite a shortage of goal attempts, it always seemed that United had the greater penetration in the final third and, with six minutes to go, they sent the vocal following of Arabs behind Macdonald’s goal wild with a killer second. Mackay-Steven, who remained dangerous, swinging in a corner that Gavin Gunning managed to stretch backwards to connect with and glance a glorious header beyond Macdonald and into the net. With the home fans leaving in numbers, the same combination nearly added a third when Mackay-Steven flighted in a free kick from the left that Gunning nodded just wide. Full time: 2-0 to United. A controlled display by the United defence provided the platform for a crucial three points that puts United right in the running for a top six finish. Although they failed to create too many chances, United were much more clinical than their hosts in the final third and will be delighted with their afternoon’s work.