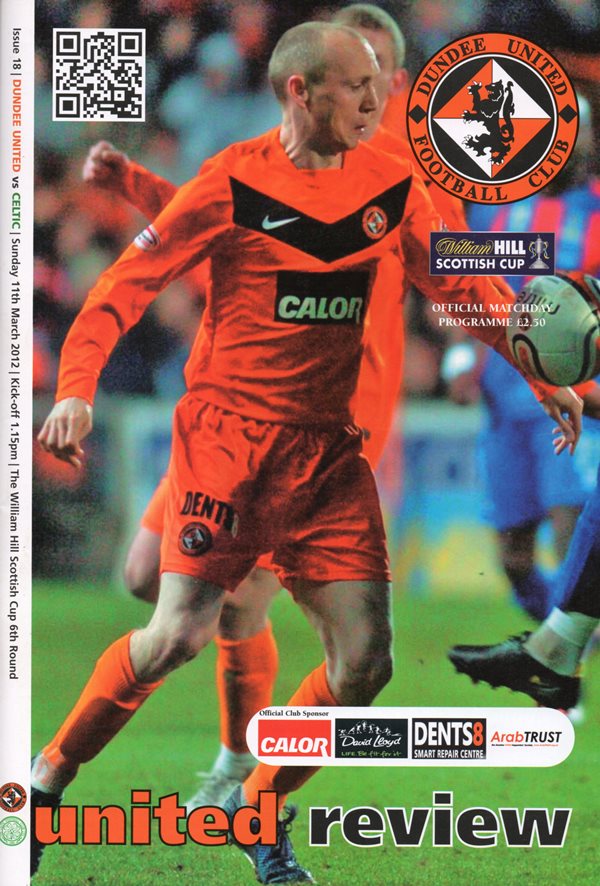 For the visit of Celtic to Tannadice in the Scottish Cup Quarter Finals Peter Houston stuck with the same starting 11 which had defeated Inverness 3-0 at home the previous Monday. This was the fourth consecutive game in a row that United had started with the same team.

A lively start saw both sets of supporters in good voice, with United pressing high up the pitch – but it took until the seventh minute for the game’s first genuine goal-scoring opportunity. Johnny Russell showed some nimble feet on the right following a long throw by Robbie Neilson. Russell then found Willo Flood in space, who crossed for Jon Daly to head a yard or so wide. Three minutes later United appealed for a penalty after Daly went down in the box, but referee Ian Brines dismissed the claims and waved play on. Both sides were displaying plenty of tenacity and industry in the midfield area but there was little in the way of goalmouth action. United almost broke the deadlock in the 25th minute after Mackay-Steven skinned Celtic full-back Adam Matthews on the left. The United winger then squared to Russell in the box whose shot was well saved by Fraser Forster in the Celtic goal. The rebound then fell to an apparently off-balance Daly, whose attempted shot was cleared by the Celtic defence. The game exploded into life three minutes later when United were reduced to ten men. A corner from the left was cleared by the Celtic rearguard, and Neilson and Georgios Samaras challenged for an aerial ball, before Samaras collapsed to the ground holding his head. Neilson was adjudged to have led with his elbow, and Brines showed no hesitation in administering a straight red card to the United defender. Mackay-Steven was the unfortunate player to be sacrificed in a tactical adjustment, replaced by Garry Kenneth, with Sean Dillon moving into the vacant right back spot. Naturally Celtic were now beginning to turn the screw, and the Hoops had their first attempt at goal in the 35th minute following successive corners, but James Forrest’s shot from the edge of the box went high and wide. The away side continued to dominate proceedings until the end of the first half, but a spirited United defensive performance meant Dusan Pernis’s goal was rarely threatened.

United were still looking to attack early in the second half, and in the 51st minute Jon Daly found space on the edge of the Celtic penalty box, before firing a low drive that Forster managed to hold. But two minutes later Celtic took the lead. Stokes was afforded too much time on the flank, and his cross found the unmarked Joe Ledley who poked the ball past Pernis and into the net. Shortly before the hour mark Peter Houston made another alteration, bringing on Milos Lacny for Gavin Gunning. United were continuing to offer industry and dogged determination, but Celtic’s man advantage was making it difficult for the Terrors to make any inroads toward the Celtic goal. United were presented with a glaring opportunity in the 70th minute when a long ball over the top freed substitute Lacny, however the Slovakian striker’s shot went wide of Forster’s left-hand post. A minute later Celtic made it 2-0. Charlie Mulgrew delivered a long free-kick from the left and Georgios Samaras rose above the United defence to head the ball into the net. United almost responded just a minute later when Scott Robertson crossed for Johnny Russell following good work by John Rankin in the middle of the park, but the United forward’s shot flew wide of the goal. The away side should have killed the game as a contest with 11 minutes remaining. Forrest beat the offside trap and played in Anthony Stokes for an open goal, but the Celtic striker somehow conspired to crash the ball against the crossbar from only eight yards, before United cleared. Three minutes later Samaras fired wide following a run and cross from the left by substitute Paddy McCourt. With four minutes left Celtic went 3-0 up. McCourt squared the ball to Joe Ledley in the middle, and the Welshman played a through ball to the unmarked Anthony Stokes who calmly finished from 10 yards. And in the final minute Celtic were awarded a penalty after Sean Dillon was deemed to have fouled Samaras in the box. Scott Brown stepped up to convert the spot-kick, stroking the ball low past Pernis’s left-hand side to seal a 4-0 victory for the away side

Today's Scottish Cup tie has been eagerly anticipated by everyone and has all the potential to be an absolute cracker between two teams in top form. Celtic have been in quite tremendous form and come to Tannadice on the back of a long unbeaten run. They weren't happy with their display at Aberdeen, but Pittodrie is a tough place to go, so a draw wasn't that bad a result. I had first hand appreciation of the quality in the Celtic side with Charlie Mulgrew and James Forrest in the Scotland squad last week. And when I look at their team, it's packed full of internationals, so we know that we are going into what is a very tough test for us. Neil Lennon has done an absolutely exceptional job. When you look at his record, having been so far behind Rangers and then overtake them even before their ten points deduction, he and his backroom staff deserve great credit. But we are looking forward to the game and hopefully with our fans backing we can get through.

Our own form hasn't been bad either and last Monday's win over Inverness Caley Thistle was a massive three points for us. Maybe I am being a bit hyper critical, but I don't think nine days lay-off after the Hearts game helped us because it seemed to hamper our momentum. Certainly, I wasn't totally comfortable until the third goal went in. Inverness didn't play all that badly, going close on one or two occasions, so great credit goes to everyone from Dusan Pernis forward for keeping another clean sheet. But that is the reward you get for working your socks off not to lose goals. That's four clean sheets in our last five games, and at the other end we have now rattled in 16 goals in our last six games. One thing is certain though, if we are to beat Celtic, we will need to play an awful lot better than we did last Monday. Happy as I am with the way things have been going, we'll need to step up another gear if we are to progress. They are a very good side and therefore we start as underdogs, but we intend having a go at them. Being a cup competition, I see little point in sitting back because a draw isn't any use. Celtic will come out fired up and Neil Lennon has so much strength in depth available to him I don't know what team we'll actually face. All I can say is how important it is that we approach the tie trying to make a right good game of it!