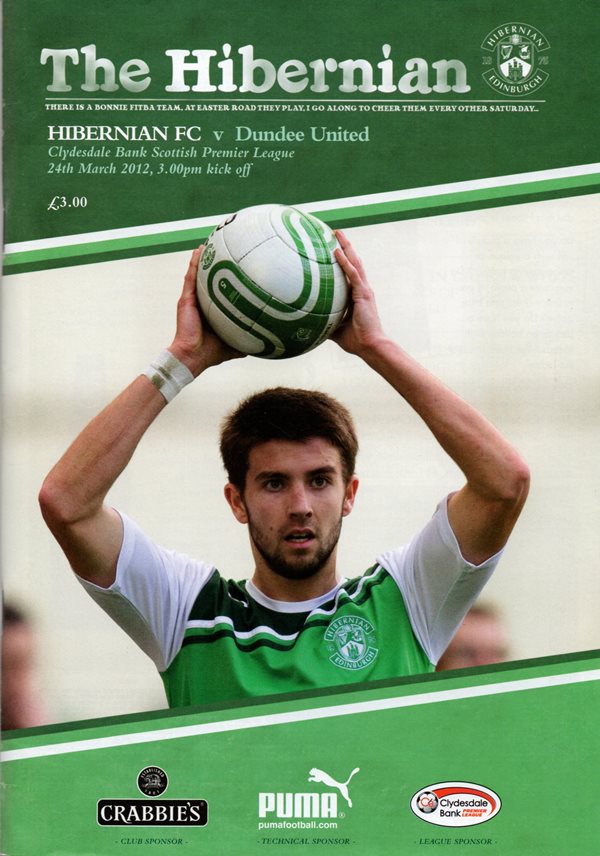 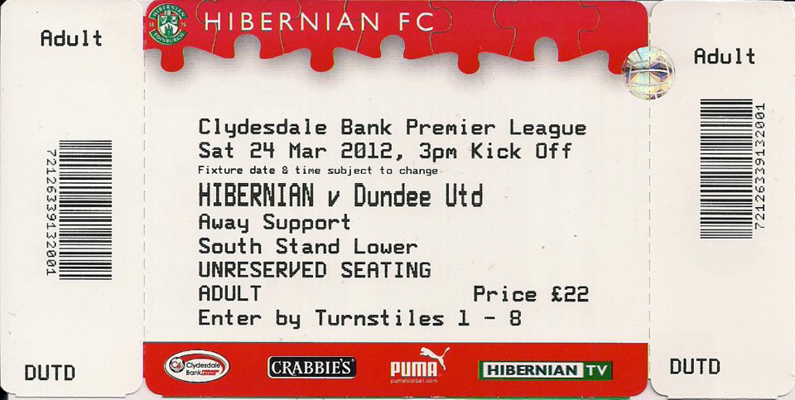 On the last day before the start of British summertime, weather forecasters had predicted Mediterranean temperatures in Scotland, while the football pundits expected a feast of football in an encounter that always bring goals. Those who turned up to an Easter Road Stadium that was engulfed in a thick sea har and endured a fairly scrappy first 45 minutes would have thought that the weathermen and the pundits should perhaps give up their day jobs. Peter Houston kept with the same starting line-up that had defeated Rangers 2-1 at Tannadice the previous weekend.

Within the first minute, United were on the front foot and nearly took the lead with their first chance. Gary Mackay-Steven flighted in a corner from the left to the far post, which Gavin Gunning met well only for his shot to be blocked. The ball then fell for Willo Flood, but his effort smacked off a defender. In an encouraging start to the game, all the chances were coming from set pieces. Hibs threatened for the first time when a George Francomb corner was met sweetly on the half volley by Leigh Griffiths, only for his effort to batter off the post. Soon afterwards, Dixon lofted in a perfect cross from the left that Jon Daly met well, only for Graham Stack to get his fingertips to the ball and tip it over for a corner. Much of United’s promise was coming from the left and, with nearly 20 minutes on the clock, Mackay-Steven swung a good ball in that Stack got to just before Jon Daly. It had been a lively start but there had been a shortage of shots on target and, for the rest of the half, neither side could really get themselves on top, with the only real chance coming for United from a corner from the right, which Gunning got his head to but Sean Dillon volleyed narrowly over. Despite a promising start, it was a poor first half and neither side had really managed to get a grip of the game. However, United had the better of the chances and Hibs were finding it very difficult to break down a resilient United rearguard.

As with the first half, United created a golden opportunity within the first minute of the second half, when Mackay-Steven pinged in a perfect cross onto the head of Jon Daly, only for United’s top scorer to not get a full header on the ball, with his effort glancing harmlessly wide. The Thurso-born winger was a real menace throughout the second period and, soon after, another perfect cross was headed over the bar by Daly. United kept up the pressure and a long range Johnny Russell effort was deflected only inches wide. Despite the mist, the football was much brighter than in the first half and Hibs came close when a last-ditch Gavin Gunning challenge almost saw the Irishman divert the ball into his own net. United responded with another chance of their own when Robertson fired in a dangerous shot-come-cross that Russell met well but Stack saved. A magic moment from Mackay-Steven ten minutes into the second half so nearly gave United the lead, when he danced past two challenges then teed himself up with a back heel and fired in an effort that dipped just over, leading to a chorus of “are you Messi in disguise” from the 1500-plus United fans behind Stack’s goal. As the hour mark approached, United threatened again with a deflected Russell effort falling for Rankin, who took the ball down well only for his effort go wide. Soon after, the former Hibs man thumped a free kick from a dangerous position over the bar. Hibs were then claiming for a penalty as Pernis clawed the ball away from Griffiths in front of goal, but referee George Salmond had no doubt that the Slovak won the ball fairly. As Hibs threw on top scorer Garry O’Connor in a bid to cause more menace in attack, United took the lead. Johnny Russell teed up Rankin, who brought a great save from Stack, only for the ball to fall kindly for Johnny Russell to knock into an empty net. United suffered a blow with 20 minutes to go when skipper Daly, who had picked up a head knock, had to be withdrawn for Richie Ryan. As the players readjusted to a new formation, they felt hard done by when Mackay-Steven chased down a ball on the touchline and set up Robertson, only for the linesman to rule it had gone out. His disappointment was overcome with 18 minutes to go, however, as United coasted into a two goal lead when Gary Mackay-Steven raced down a through ball and fired a low effort that slid under Stack and into the net. From then on, United were coasting and restricted Hibs to only half chances, such as when Sproule cut inside and had a shot from the left held by Pernis, and O’Connor fired in a low drive that Pernis comfortably held. But United were cool and composed in the closing stages and never looked like giving up the upper hand they had earned themselves.