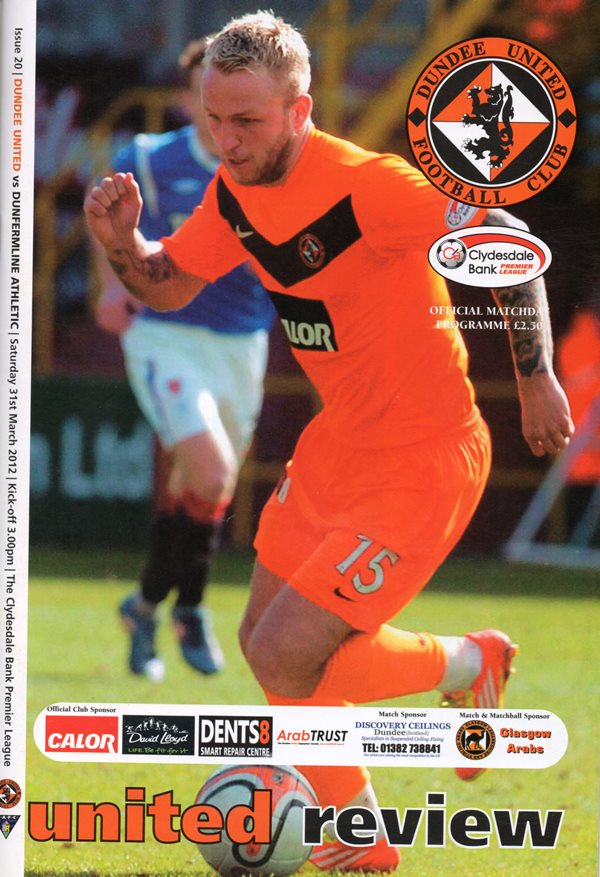 Peter Houston made one change to the starting line-up that had defeated Hibs 2-0 at Easter Road. Right-back Robbie Neilson was restored to the starting eleven after serving his suspension with Keith Watson dropping out of the squad altogether.

The first half started brightly for the home side with United creating the only chances in the first half hour. The best of the Tangerines’ chances fell to Paul Dixon, Robbie Neilson and Gary Mackay-Steven. Thirteen minutes in, a Willo Flood cross produced an unnecessary punch from Chris Smith in the Pars goal. The ball fell to Dixon, left centre, on the edge of the area and his low shot flew untouched through the bodies on the six yard line when a deflection so easily could have turned it goal bound. The best chance arguably came a minute later for Robbie Neilson, back from suspension in place of Keith Watson, following some great work down the left from Gary Mackay-Steven. His cross aimed in at both Johnny Russell and Jon Daly evaded the deadly duo. However, Neilson came powering into the box but he failed to meet the target. Dunfermline managed to get in the game after half an hour with Joe Cardle crossing to Martin Hardie who headed harmlessly over. The game was starting to become scrappy with Gary Mackay-Steven on the receiving end of what can only be described as a kicking.Nevertheless, the winger was not to be fazed and just a minute after Dunfermline’s rare first half attack on Dusan Pernis’s goal, he tested Pars’ keeper Smith with a fine effort from just outside the area. John Rankin was trying to a find a way through the Dunfermline bodies but instead played the ball to Mackay-Steven who having cut inside, wriggled to find some space and from 25 yards and unleashed an excellent shot that had Chris Smith diving to his right and successfully deflecting the ball away and behind.

United didn’t have to wait too long into the second half to take the lead. A Robbie Neilson long throw on forty-nine minutes found the captain in the area; the ball bounced and bobbled amongst Daly and the Pars defenders until Scott Robertson’s telling touch allowed the ball to fall into the path of Jon Daly and he unleashed an unstoppable volley to send the ball past Smith and United 1 – 0 up. A special goal from an outstanding player achieving his 45th career SPL goal. On sixty-nine minutes Joe Cardle had a chance with which he should have done a lot better. In a good central position with space, the midfielder ballooned his shot over. The pressure of being locked in the battle for survival for the visitors was beginning to show as Jim Jefferies was getting more animated as the half wore on and his players were showing more frustration. If Dunfermline weren’t out of it at 1 – 0 they certainly were at 2 – 0. In the eightieth minute Mackay-Steven burst like lightening past Dowie to hit the byline. His cutback evaded Daly, however the chance wan’t gone and it was converted thanks to the late arrival of Scott Robertson into the area, blasting the ball into the back of the net. On eighty-five minutes Johnny Russell out-muscling the close attentions of Rutkiewicz holding the ball up for Rankin. However, the midfielder was too quick and the ball played behind him to the big Irishman Jon Daly, who set about blasting home from 15 yards. Another professional victory, ensuring that United’s push for Europe continues and the team remains unbeaten in the SPL since the first half of January.

Winning is a good habit and with five straight wins under their belts, the players are in that mode just now. However, even after beating Rangers two weeks ago, the players were shaking their heads with the disappointment of their performance. But they have no need for such recriminations. It was a massive three points no matter what Rangers side you're facing. But it's games like that when you don't play well and get three points that make the difference. We played better in the first half against Celtic the previous week and lost! The difference was we went one up this time, courtesy of Keith Watson's tremendous strike. We started the second half on fire and got the second goal through a great cross from Gary Mackay-Stevens to Jon Daly. After that, we put ourselves under pressure with poor decision making and getting deeper and deeper, no matter how many times I shouted to get them up the park. For the run that we are on, there is no doubt in my mind the players should be showing more belief in their own ability, because they have proved they have got it. Okay, they'll make the odd bad pass here and there, but they shouldn't be knocking themselves for that. Certainly, there is no criticism from me or the backroom staff, though I admit to having a wee go at them at half-time against Hibs last week, but that was just to gee them up a wee bit. Even allowing for that, we created chances in the first half, especially early on. We then deteriorated, and though we continued to pass the ball, it was without any penetration or conviction. Hence the reason I asked them to be more positive and braver at the break. And second half we were brilliant. We just upped the tempo a bit and passed the ball better and as I'd asked at the interval got in behind them. The players listened to what we had to say at half-time, and took it on board, but that is a testimony to the good professionals they are. Young Gary Mackay-Steven was a case in point. He was sensational in the second half, but never once got behind them in the first half.
Johnny Russell was involved in both goals, starting and finishing the first, and setting up the second for Gary Mackay-Sleven.

And as usual Jon Daly held the ball up as he does so well. So we can be a handful going forward especially adding in the number of assists from Paul Dixon has provided. Irrespective of whether Hibs are second bottom of the league or not, Easter Road is still a difficult venue, but in the end, we emerged comfortable winners. Although some people are suggesting that we can catch Motherwell, at the moment I am just pleased that we have secured a top six spot and have a four point advantage over Hearts. There are seven games still to go and I'll only look at what is immediately in front of us and the visit of Dunfermline this afternoon brings its own problems.
We'll be expected to win and win comfortably by many, but the only people not thinking that way is myself and the players. We know that we'll have to work every bit as hard as we did against Rangers and Hibs if we are to continue our winning run, particularly now they have Jim Jefferies in charge. He is one of the managers in the game for whom I have the utmost respect. I have worked under him and learned a lot from him on the management side. He hasn't got Billy Brown with him, but Billy was terrific on the training side, so the pair were hugely influential in shaping my career. I know what Jim will bring to Dunfermline. He'll make them not just hard to beat, but Jim also likes his teams to have a go and score goals. So I expect the side we are facing today to be tighter at the back and attack minded, so we must be very cautious because of the type of manager they have. And that means we can't afford any complacency as we take on a Pars side fighting for survival.