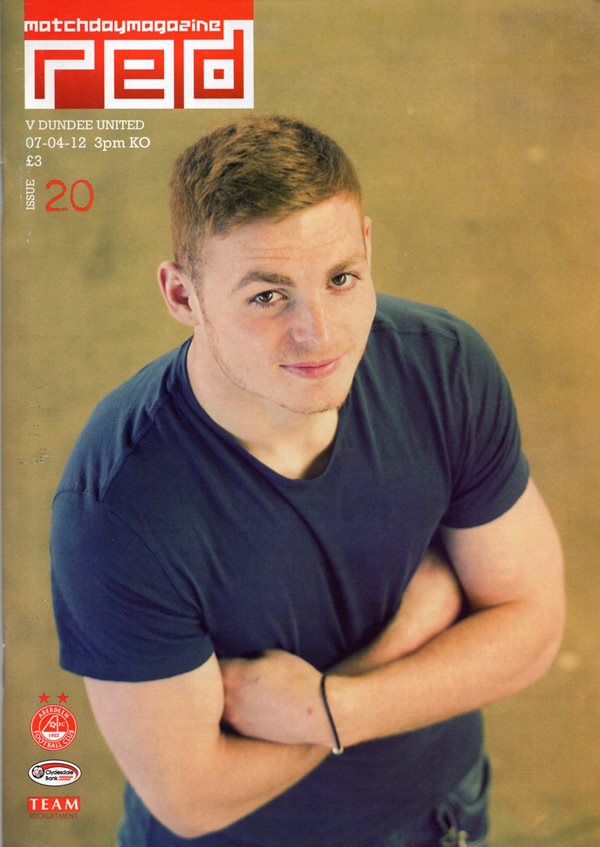 SPL Manager of the Month for March Peter Houston stuck with the same starting 11 which had convincingly defeated struggling Dunfermline by three goals to nil the previous weekend at Tannadice.

After a slow start, United had a strong claim for a penalty when Paul Dixon threaded a fine ball through to Scott Robertson, who felt he was tugged in the box by his Aberdeen namesake Clark Robertson, only for referee Calum Murray to wave away United’s claims. It proved to be an early sign of the way the afternoon would go for the away side. Aberdeen, who have been struggling lately in the league despite having a cup semi final to look forward to next week, seemed to take heart from that let off and soon found themselves in the lead. First Gavin Gunning had to do well to deflect an effort wide for a corner, then Darren Mackie controlled the ball well 15 yards out and lofted an effort over Pernis and into the net. It was the first time United had found themselves behind in a league match since the 2-1 defeat at Parkhead in mid-January. United needed a reaction and their first opportunity of note came after 22 minutes, when Willo Flood lofted in an in-swinging corner that Jason Brown had to parry away to Robbie Neilson, who teed up a John Rankin shot from the edge of the area that fizzed just over. Within a minute, Aberdeen nearly extended their lead when Flood’s pass back to Pernis was short and Hughes battered in an effort that Pernis had to fist over. The game was heating up and, with nearly half an hour on the clock, United were back level when Willo Flood’s outswinging corner was met perfectly by Jon Daly, who coolly side-footed past Brown to send the near 2000-strong United support wild with the traditional “hands up” celebration they have become so used to in recent seasons. United found themselves in the rare position of being a goal down but managed to respond well and ended the half as the better side. However, despite having more of the possession, manager Peter Houston would be looking for more of a cutting edge in the final third, with Dons keeper Brown having little to do other than pick the ball out of the net.

United were lively right from the start of the second half and Jon Daly went down at the edge of the box after a challenge from Andrew Considine, who avoided a red card despite already having been booked. But Paul Dixon’s free kick went harmlessly over the bar. Aberdeen lost Andrew Considine to injury and, with Russell Anderson settling into the back four, United fans thought their side had gone ahead when Dixon swung in a free kick from the right which Gunning met well but his header pinged inches wide and into the side-netting. Gunning then had to come to the rescue at the other end, when he brilliantly blocked a Vernon effort. Both sides were starting to threaten and Jack came close for Aberdeen after 63 minutes when he rasped in an effort from the right side of the box that Pernis had to be alert to save. Midway through the second half, Aberdeen took the lead for a second time with a gift a goal. Rory McArdle swung in a cross from the right that Pernis appeared to have under control, only for him to drop it at the feet of the grateful Chris Clark, who side-footed home. It was a rare mistake for the Slovak, but he recovered well shortly afterwards when Aberdeen quickly countered a United attack and sent Fallon clear, only for Pernis to save brilliantly at the striker’s feet. A bad afternoon for United got worse with 12 minutes to go when United’s defence failed to clear a long throw from the right and the ball fell invitingly for Ryan Jack to stoop a header beyond Pernis. A disappointing afternoon for United’s strong and expectant support. Their side had a lot of the ball but for once their creative players, so dangerous in recent weeks, just failed to threaten.