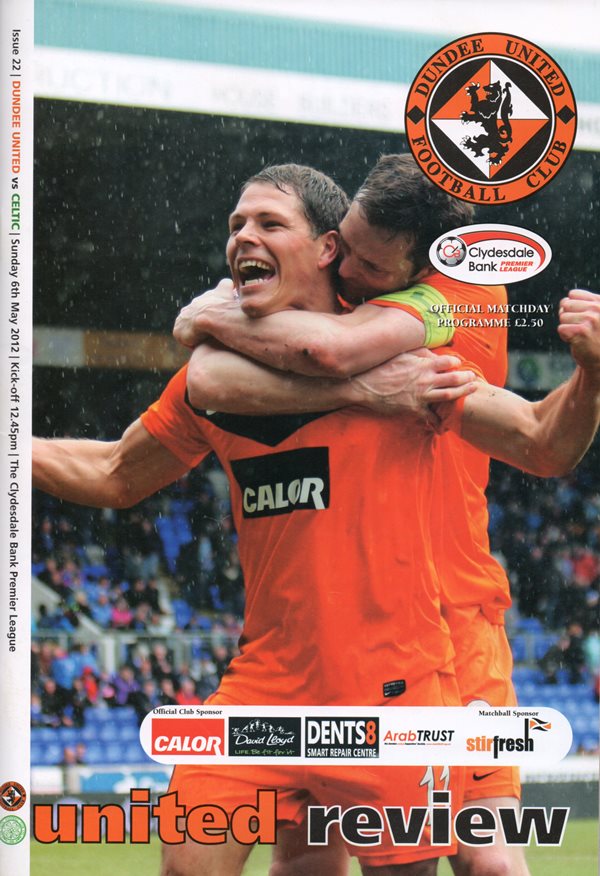 United went into their last home game of the season knowing that a win over champions Celtic would all but secured fourth place and a Europa League spot. Following on from the 5-0 defeat to Rangers at Ibrox during the week, Peter Houston made two changes to his starting line-up with Gavin Gunning and Ritchie Ryan replacing Garry Kenneth and Johnny Russell who both dropped to the bench. United were looking to take their first points off Celtic of the season having lost the three previous league encounters against the Parkhead side.

Both sides took a while to settle into the game with little goalmouth action in the opening stages. Celtic created the first chance of the game after 10 minutes when Kris Commons split the United defence with a superb through-ball but Gary Hooper’s cutback intended for Scott Brown on the edge of the box was cleared. Despite the slow start to the match a goal was not long in coming and it was United who opened the scoring in the 21st minute. Gary Mackay-Steven and Paul Dixon caught the Celtic defence unawares with a quick corner and the latter whipped a brilliant cross into the box which was met by Scott Robertson who did well to stretch his neck muscles and head the ball back across goal and into Fraser Forster’s bottom right-hand corner, 1-0 United. Kris Commons tried his best to respond for Celtic in the 29th minute when he found space to get a shot away from outside the box but his weak effort took a deflection and went out for a corner. The away side were presented with a gilt-edged chance to equalise from the resulting corner when Commons’ delivery reached Thomas Rogne who directed the ball forward into the path of Gary Hooper who was lurking at the back-post but the striker’s shot on the turn was blocked well by Dusan Pernis before his defence could clear the ball. Hooper tested Dusan again in the 36th minute when he gathered the ball half way inside the United half before driving forward and unleashing a low shot from 30 yards which Pernis could only parry but luckily Sean Dillon was on hand to clear the danger. With half-time approaching, Celtic were now firmly in control of the game and Kris Commons was next to have a shot at the United goal with a powerful left-footed drive from 25 yards out which was blocked by the strong fists of Pernis and only seconds later – after Nielson had given the ball away – Commons was involved again when he played a low ball across the face of goal which should have been put into the net by the unmarked Stokes at the back post but the Celtic striker miscued and it remained 1-0 to the home side at the interval.

Celtic started the second half on the front foot and Pernis was called into action within five minutes of the restart when Lustig’s cross was met by Tony Watt but his powerful header was straight at the keeper. Celtic defender Thomas Rogne was forced off through injury and was replaced by Victor Wanyama and the stocky Kenyan midfielder’s blushes were saved when he should have scored with his first touch - a free-kick from Commons to the back-post was headed back into the danger area by Tony Watt and Wanyama somehow managed to head over from only a few yards out – but the linesman’s flag had already gone up to indicate that the ball had crossed the by-line before Watt had headed it back into play. Gary Mackay-Steven had a shot on goal from a difficult angle that sailed just over the bar after the referee had played advantage as the aforementioned Wanyama had clattered into John Rankin in the build-up with the Celtic player being booked. Despite the away side now dominating proceedings, United still looked dangerous on the counter-attack and this was demonstrated when Mackay-Steven’s broke with pace down the left-wing before holding the ball up to allow his teammates to catch up and eventually the ball was played to Paul Dixon who whipped the ball dangerously into the box. Jon Daly got on the end of his delivery: trying to flick the ball towards goal with the outside of his boot but his effort was blocked. The ball broke out to John Rankin who was arriving late inside the box and only a superb last-ditch challenge from Wanyama prevented the impressive midfielder from scoring United’s second. Celtic had a strong claim for a penalty in the 75th minute when an attempted cross by Emilio Izaguirre appeared to be blocked unintentionally by the arm of Keith Watson but the referee instead awarded a corner-kick. Five minutes later Gary Hooper came within an inch of bringing Celtic level when he was played through on goal by Kris Commons but the striker’s low shot across the face of goal went just wide of Dusan Pernis’ far post. Only a good piece of defending prevented Johnny Russell from getting a shot away on goal from inside the box in the 88th minute as United looked to kill off the match and despite a late flurry from Celtic the visitors could not find the equaliser and the match finished 1-0 to United. This was the Terrors’ first win over Celtic since November 2009 and all but secured fourth spot in the SPL and subsequently a Europa League spot. 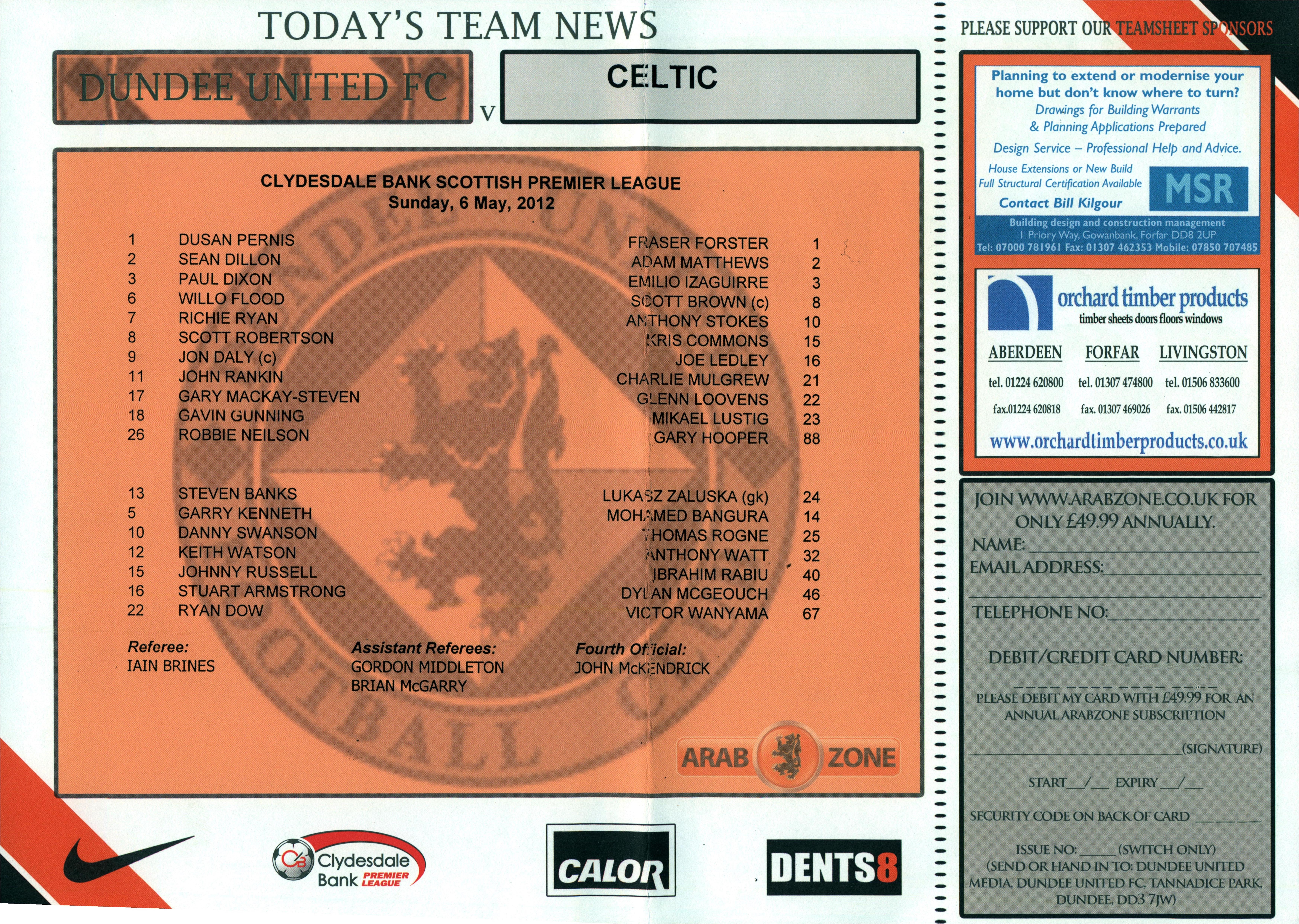 This being our last home game of the season, I would like to reflect on what has been by and large a very good season for Dundee United. True we were slow out of the blocks suffered an early exit from Europe. A lot of people forget that we only went out to Slask Wroclaw on goals, after winning the home leg and though that was obviously disappointing, because everyone would have liked a longer run in Europe. But the Poles were runners up last again this term, so to lose out so narrowly is a better result than it may have looked. After the loss of four key players over the summer plus David Goodwillie's transfer early into the new season, it was a case of bedding in new players who were mainly younger. And to their credit they have done the business. By necessity they have had to mature quickly, but with a helping hand from the more experienced youngsters they have responded brilliantly, especially since the turn of the year. And there are others like Ryan Dow waiting in the wings, because I am convinced he has the ability to follow in the same path. As twelve months ago when some guys are going away, the same is true again with Dusan Pernis, Paul Dixon, Garry Kenneth and Scott Robertson all indicated their intention to move on. They can hold their heads up high for the contributions they have made helping us lift the Scottish Cup as well as taking us into Europe for the past two seasons. They have served the club incredibly well and will leave Tannadice with everyone's best wishes for the future. So despite all the difficulties, including budget cuts, it has turned into a decent season. We'd have liked to have done better in the cup competitions. In the Scottish, we didn't get the best of draws because having knocked Rangers out at Ibrox, we couldn't have landed a more difficult tie than facing this afternoon's visitors Celtic, albeit with home advantage. It started off very well, but the sending off of Robbie Neilson changed the game. Earlier in the season, we missed out on semi-final place in the League Cup, losing to Falkirk on penalties here at Tannadice.

Skipper Jon Daly has led by example and scored goals, but all of them have played their part. Outside of the Old Firm, the only team to beat us away is Aberdeen, which is a feat in itself. In fact, Wednesday night at Ibrox excepted, our away form has probably been better than our home form. A major disappointment was losing here to Dunfermline early on in the campaign when we were going through a sticky spell, but the players picked it up and I am sure our supporters will look back on a season of transition with fond memories and well satisfied that we have finished in the top six and have a great chance of earning a place in Europe for the third successive season. This afternoon we welcome Celtic who are worthy champions and undoubtedly the best team in the league. Some of their performances this season, and certainly against us, have been exceptional for which Neil Lennon deserves great credit. So after our disappointment on Wednesday when our outside hopes of Champions League football vanished, we have to pick ourselves up and dust our selves down from that disastrous 5-0 defeat. For whatever reason, we just didn't turn up and I could take no positives from the performance. Certainly I'll have to consider freshening up the side, but knowing the players they'll be as desperate as I am to get the Ibrox debacle out of their system as I am.