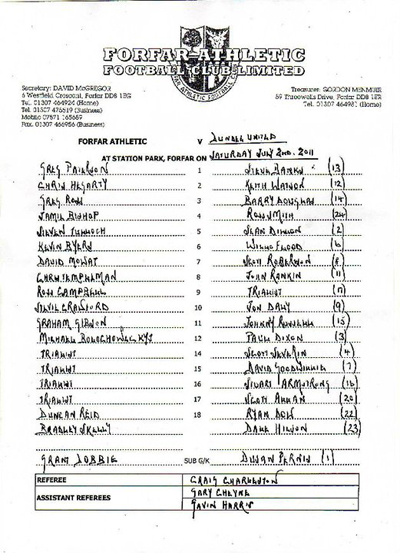 In their first pre-season friendly in Scotland, United eased their way to a comfortable 2-0 win over SFL Division Two side Forfar Athletic at Station Park this afternoon. An own goal in the first half and second from Johnny Russell was scant reflection of the gulf between the sides. However, the downside was the injury sustained by Scott Robertson. The midfielder went over his ankle and had to be helped off, and puts a major question mark over his availability for the Europa League tie in Poland.

With Garry Kenneth failing to recover from the hamstring injury that forced him off during the draw with Bohemians in Dublin, there was a new defensive partnership on view at Station Park with Sean Dillon teaming up with teenager Ross Smith with Scott Severin on the bench.

There was also a new full-back partnership in Keith Watson and Barry Douglas.

Only change in midfield was trialist Gary Mackay Steven coming in for Stuart Armstrong.

Familiar face in the Forfar ranks was Steve Crawford, the 37 year-old having just joined the Loons. Another former ex-Tannadice employee in the opposition ranks was Mikey Lee who was listed as a trialist.

United started slowly against Dick Campbell’s side for whom this was their first outing in preparation for the new season.

Thirteen minutes elapsed before we had the first threat on goal, Jon Daly sending a free header from a Barry Douglas free-kick just wide of the target.

At the other end Steve Banks was called into action for the first time, punching away a Greg Ross in-swinging cross to earn Forfar another corner in a series of such awards.

United’s game was gaining in tempo.

Flood appeared to be bundled off the ball as he went for another threatening another Mackay Stevens cross.

And at the other end, Loons’ skipper Chris Templeman had the clearest cut opening of the game so far, making space well to fire in a low drive from 12-yards, but fortunately, it was straight at Banks.

United finally broke the deadlock after 32 minutes, though it has to be said that it was in fortuitous circumstances.

Willo Flood worked his way in from the right before delivering an inviting low cross, but before it could reach his fellow countryman Jon Daly, home defender John Bishop slid in and diverted the ball just inside the far post.

In the final five minutes of the first half, United dictated play, knocking the ball about at will.

For the second half, Scott Severin came on for Ross Smith, but before he had a chance to be involved, United almost immediately, doubled their lead.

Yet another sumptuous cross from Mackay Stevens was met by Jon Daly, but his downward header was well saved by Greg Paterson down at his left-hand post.

Well on top, Scott Allan came on for Flood.

Two minutes later Johnny Russell over-ran the ball allowing the keeper to block his effort as the Tangerines continued to dictate.

With just over an hour played, Scott Robertson was injured after going for a Russell cross and ultimately limped off to be replaced by Paul Dixon.

United finally added a second following great work by Allan the substitute. He waltzed past three of last season’s team-mates to set up Russell to knock home almost right on the goal-line.

Russell fired over from a Douglas knock-down, signalling a rash of substitutions – both sides making three changes with just over 20 minutes left.

For United, Dusan Pernis, Ryan Dow and David Goodwillie came on for Banks, Mackay-Steven and Daly.

Eleven minutes from the end Russell looked to have been pushed in the box as he went for a Watson cross but no penalty was forthcoming.

Immediately, Forfar broke to the other end and Ross Chisholm fired in a shot from 25 yards, but it was meat and drink for Pernis who gathered easily for what was his only significant action of his first appearance of the season.

In the last five minutes Goodie twice came close to finding the net.

First he saw his well-struck drive from an acute angle tipped round the post by home keeper Paterson and in the last minute he nodded a Sean Dillon header over.

And had those gone in, it would have given the final scorer a truer reflection of proceedings.