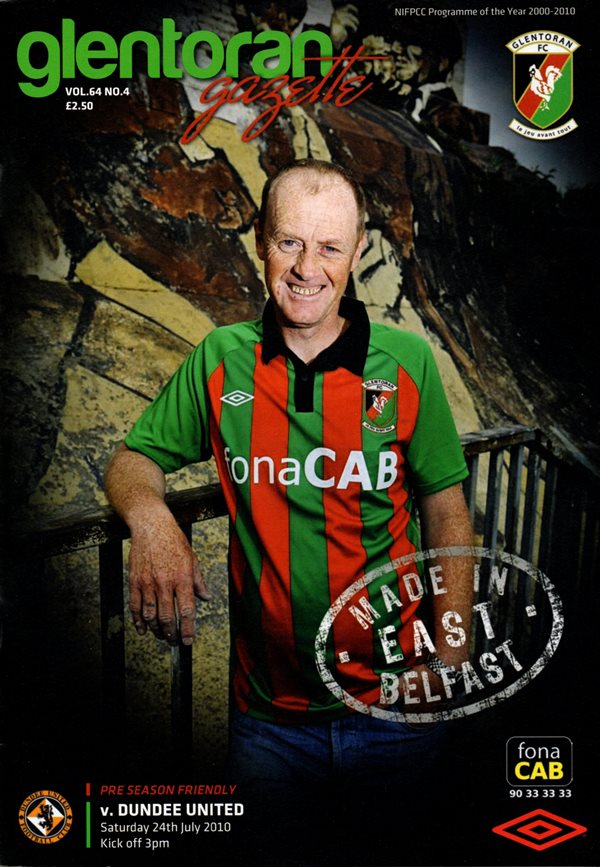 A last minute Damian Casalinuovo header earned United a draw against a hard working Glentoran side.

Peter Houston fielded a strong side for the friendly, with trialist Irmantas Zelmikas alongside Garry Kenneth at the heart of defence in front of the returning Dusan Pernis.

On a dry and sometimes slow pitch, the game started at a low key tempo, with the home side working hard to close down space for the visitors, particularly in preventing United playing through them, with holding midfielder Richard Clarke constantly quick into the challenge.

United’s best two opportunities in the first half both involved the Lithuanian trialist, with the defender measuring a ball into the channel which David Goodwillie skilfully manoeuvred over Glens’s goalkeeper Elliot Morris, but the lob went narrowly wide of the far post.

Five minutes later, Zelmikas rose to meet a Craig Conway corner from the right, with his powerful header parried onto the crossbar by Morris.

The first half ended goalless with Pernis untroubled, with Glentoran winning a number of set pieces, but unable to create any meaningful chances from them.

After the break, the anticipated glut of substitutions from both sides broke up the flow of the game, and it was Glentoran’s half time substitute Daryl Fordyce who opened the scoring in the 62nd minute.

A Gary Hamilton corner was headed powerfully by Glentoran skipper Colin Nixon, and Fordyce reacted quickly on the edge of the six yard box to stab the ball beyond Pernis and into the net.

United’s substitutes were also getting involved, and Barry Douglas popped up in the area to meet a deep cross from the right, but couldn’t get any power into his header which was gathered by Morris.

Morris was again in action as United piled the pressure on in search of an equaliser, with Goodwillie and Buaben denied in a frantic series of events, while Conway was also denied.

Jennison Myrie-Williams replaced Conway with twenty minutes to go after Conway had taken a knock on the shin, and the Englishman was looking lively, firing a shot over the bar from 20 yards after a good run down the right.

Myrie-Williams then turned architect for the late equaliser. The winger was fouled midway inside the Glentoran half, and after a quick free kick was taken, Myrie-Williams delivered a cross from the right which was headed into the top corner by fellow substitute Damian Casalinuovo.