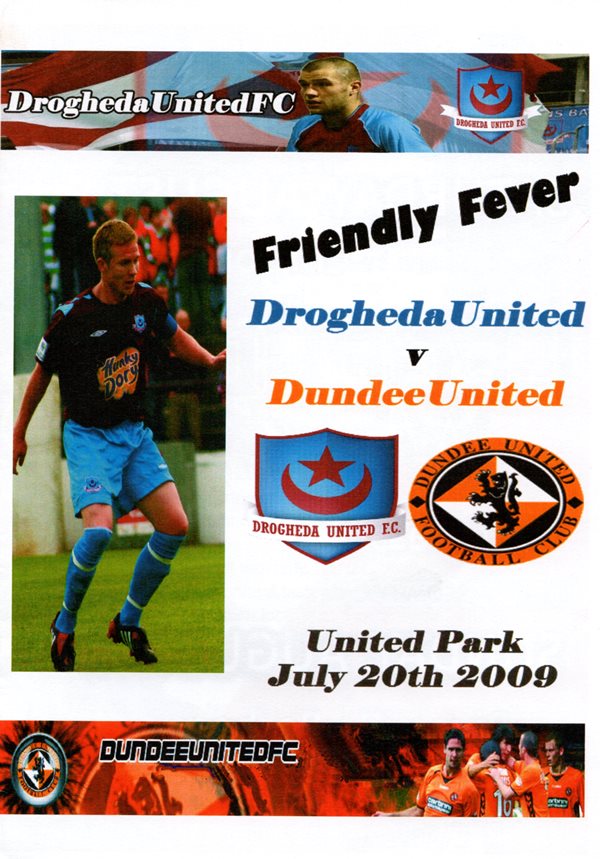 United’s pre-season tour of Ireland kicked off with a draw against Drogheda United at United Park. The home side took an early lead through a Paul Crowley penalty, before doubling their advantage early in the second half through substitute Ian Ryan from close range.

Craig Levein’s side came back in the final quarter of the game though, with Danny Cadamarteri scoring his first for the club after good work from Gomis and trialist Casalinuovo on the counter attack. Mihael Kovacevic scored the equaliser after Garry Kenneth had hit the bar, while Kenneth was denied a winner by the post in the final few minutes.

There was a mix of youth and experience in the United side, with Conor Grant, Greg Cameron, Ryan McCord and Andis Shala all starting the match against one of the form sides in the Eircom League in recent weeks.

Despite being halfway through their domestic season, however, Drogs boss Alan Mathews took the opportunity to give some game time to squad players in the home ranks, with six changes to the side who lost 2-1 to Bray on Friday to end a six match unbeaten run.

The Terrors fell behind in the eleventh minute, when Garry Kenneth fouled Robert Martin in the area, and Paul Crowley placed his penalty beyond the reach of Conor Grant.

For the remainder of the opening half United enjoyed the majority of possession and territory, but were unable to find the clinical touch in front of goal.

Garry Kenneth hit the visitors’ first shot on target in the twentieth minute, collecting on the edge of the area after a chest down from McCord, but his curler was saved easily by Williams.

Paul Dixon set off on a surging run four minutes later, but as he tried to slip the ball into the area for Cadamarteri, full back Gibb stretched to divert the ball out for a corner.

Shala saw his header from Dixon’s cross loop onto the roof of the net, before Myrie-Williams stung the hands of Williams from twenty two yards, but the Drogs ‘keeper held on at the second attempt.

The home side made five changes at half time, and two of the substitutes made a quick impact on the match.

James Chambers was fouled whilst surrounded on the left corner of the penalty area, and stepped up himself to fizz a free kick towards goal.

The ball bounced just in front of youngster Conor Grant, making it difficult for him to do anything other than parry the ball out, where it dropped perfectly for the on-rushing Ian Ryan to knock it home from close range.

After Drogheda United had brought on their remaining five substitutes, United made their first change, with trialist Damian Casalinuovo replacing Andis Shala, and within two minutes, the substitute played a significant part in United pulling one back.

Morgaro Gomis launched a counter attack from his own half, sprinting forward before slipping the ball into the right channel for Casalinuovo, who rounded substitute goalkeeper Skinner and got the ball across to the far post where Cadamarteri had plenty of time to control and knock in his first goal for United from a couple of yards.

Conor Grant then made a good block from O’Connor after the Drogs winger had shown good skill to wrong foot Kovacevic.

Cadamarteri had a chance to level after a long ball forward broke perfectly off a defender for him to run in one on one with Skinner, but the forward’s measured shot went wide of the far post.

United did draw level with eleven minutes remaining though, following a corner from the left. Greg Cameron’s inswinger to the back post was headed against the bar by Kenneth, the rebound was nicked away from Dods but dropped to Kovacevic, who crashed a shot from twelve yards into the top corner.

The visitors came close to a late winner, with Kenneth again reaching a far post corner, but this time being denied by the post.