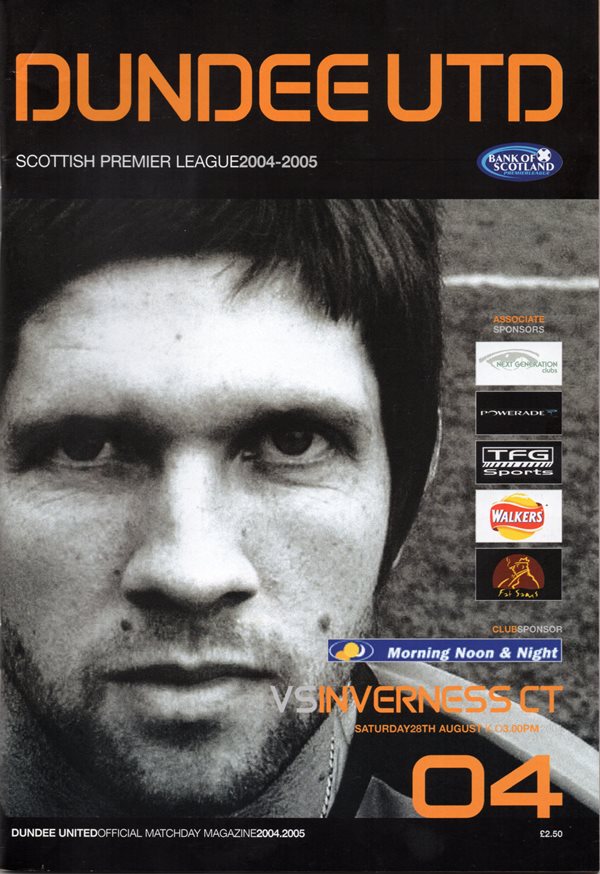 A little piece of history was made today as United took on Inverness Caledonian Thistle on League business for the first time. United lined up in 4-4-2 formation. There were three changes to United’s starting line-up from the CIS win over Stranraer with Stuart Duff, James Grady and Andy McLaren all dropping to the bench. Jim McIntyre joined Jason Scotland in attack and Billy Dodds was handed a starting spot in the centre of midfield. The warmest welcome of the day was reserved for his central midfield partner, new signing Grant Brebner. The former Hibs man would have required little introduction to most Arabs having made quite an impression at Tannadice on several previous occasions – not least when he scored a hat-trick to put United out the Scottish Cup in January 2003.

Caley started brightly, with Liam Keogh looking good in midfield and Juanjo posing problems for United’s back line. The Spaniard won an early free-kick from Chris Innes from which Richie Hart could only hit the wall. Juanjo then set up Graham Bayne, but his 20-yard volley was well over. At the other end Scotland sent McIntyre through on goal, only for the striker to drag his shot wide off the far post – but the flag was up for offside in any event. United were to be frustrated by the Inverness offside trap for the remainder of the half. Juanjo continued to look lively, but his header from 15 yards failed to test Tony Bullock, and a tame free-kick went past without troubling the United keeper. On the occasions the Inverness offside trap was beaten, goalkeeper Mark Brown was found to be on top form. The home side’s best chance of the first period came after 18 minutes starting with Mark Wilson who played a lovely ball inside for McIntyre. His clever pass released Scotland into the box. The striker unleashed a powerful low shot towards the far post, but with the crowd already on their feet, Brown pulled off a superb fingertip save. Shortly after, Wilson collected a poor Stuart Golabek clearance and cut inside from the right, however his shot from the edge of the box was bravely charged down by Stuart McCaffrey. Golabek and Roy McBain combined to set up Juanjo in the United box, but he delayed too long allowing the United defenders to close in, and Bullock smothered the loose ball. A one touch exchange of passes between Juanjo and Bayne set up Barry Wilson whose fine 20 yard drive was brilliantly pushed behind for a corner by Bullock, diving high to his right. Juanjo was then involved again but couldn’t reach Keogh’s cross from the right with his head – he used his hand instead and found himself the first player to enter referee John Rowbotham’s book. Then came the best move of the half with Mark Wilson, Brebner and Alan Archibald all involved. McIntyre was released to the right of the Caley box. His cross was fed back to Dodds, but the striker put his shot high and wide. Robson tried a shot from thirty yards, but it was comfortable for Brown to collect. Hart could only find the side netting for Caley having earned himself a yard of space in the United box. The game seemed to be petering out towards half time but at the death Mark Brown had to tip a dangerous Barry Robson cross behind with McIntyre ready to score.

The second half was to see an increase both in entertainment and in the quality of passing. There were no changes in personnel at half time – but United moved up a gear in their search for the opener. Scotland ran past three players from half-way and managed to get a shot in from twenty-five yards, though it was straight at Brown. A lovely left-foot Wilson cross put Dodds in behind the Caley defence, and with the ball sitting up he lobbed the onrushing Brown – but cleared the bar as well. Brebner then released Dodds on the left of the box. His low driven cut back almost set up Scotland, but Brown dived bravely at his feet to snuff out the danger. Scotland then set up Brebner at the edge of the box, and the 26 year old came within inches of a debut goal, his strike scraping past Brown’s left hand post with the keeper stranded. United failed to make their superiority count and it was the visitors who took a surprise 59th minute lead. A fine chipped through pass from Ross Tokely put Juanjo in the clear, with just a suspicion of offside. He rounded the advancing Bullock before going to ground after what must have been the slightest of touches from the big keeper – but it was enough to have referee Rowbotham pointing to the spot. Barry Wilson converted the penalty calmly, sending Bullock the wrong way. The United players clearly felt aggrieved and Dodds was cautioned for dissent. Innes joined him in the referee’s book shortly after, following a hard tackle on Juanjo, who was certainly not popular with the home support. This was Caley’s best spell and Wilson should have had his second minutes later, but he sliced wide from 15 yards after a good header from Bayne had set him free. United fought their way back into the game, yet for a long time it did not look like it was going to be their day. McIntyre timed a run to perfection to meet a flighted Archibald cross from the left, and the striker’s powerful downward header from six yards seemed destined for the net – but Brown pulled off another top class save. The keeper then made his first mistake, flapping at a Brebner corner. With the goalkeeper out of position, the ball fell for Archibald but his net-bound shot deflected cruelly off the back of McCracken for a goal kick. It would have been easy for heads to go down at this point. But the equaliser was on its way. Following a seventy-first minute Robson corner, Brown made another superb stop to deny Dodds, but this time Chris Innes was on hand to smash home the rebound from close range. Both managers adjusted their forward lines in the search for a winner, with Grady replacing Scotland for United, and Brian Prunty coming on for Juanjo to freshen up Caley’s attack. United certainly looked the more likely side. Grady immediately went about unsettling the Caley defence, first winning a free-kick twenty yards out – which Robson could only hit against the wall – and then almost managing to bundle the ball home himself after a penalty-box scramble. McLaren then replaced the industrious Dodds with seven minutes left on the clock. It was Jim McIntyre who was to make the difference. With barely five minutes of the game remaining the striker took a Brebner pass to into feet, back to goal, with defenders in close attendance. In a split second he swivelled round to send a rasping left foot drive low past Brown. John Robertson replaced McBain with another striker, Steven Hislop, switching to 4-3-3 in a last ditch attempt to salvage something from the game. But there was no way back for Caley now and the deserved three points for United were a fair reflection on the second half. 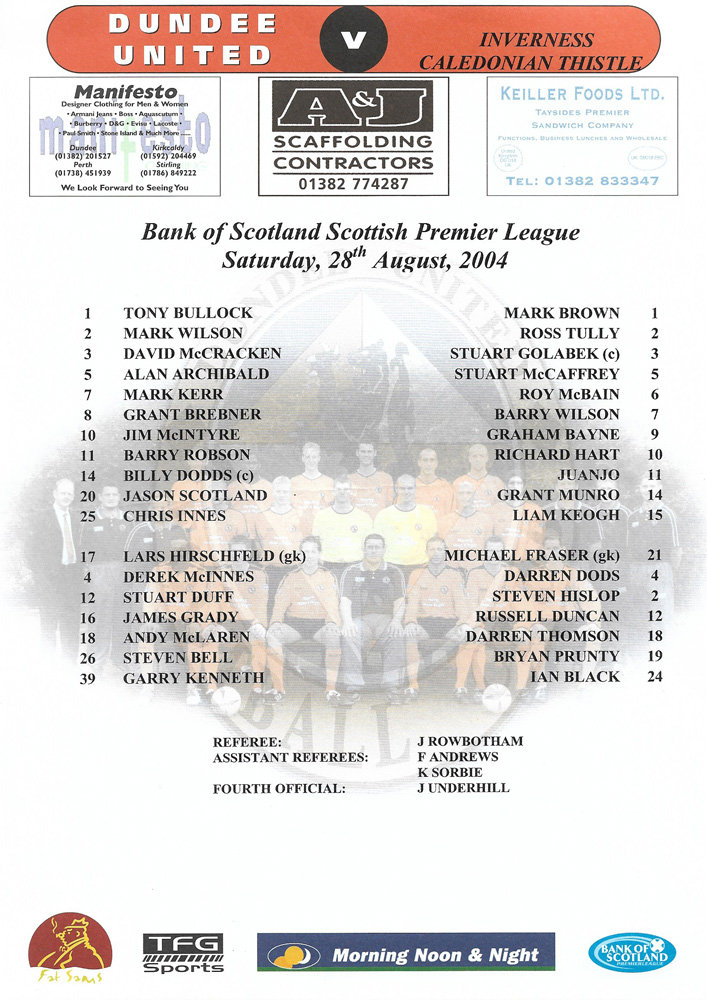