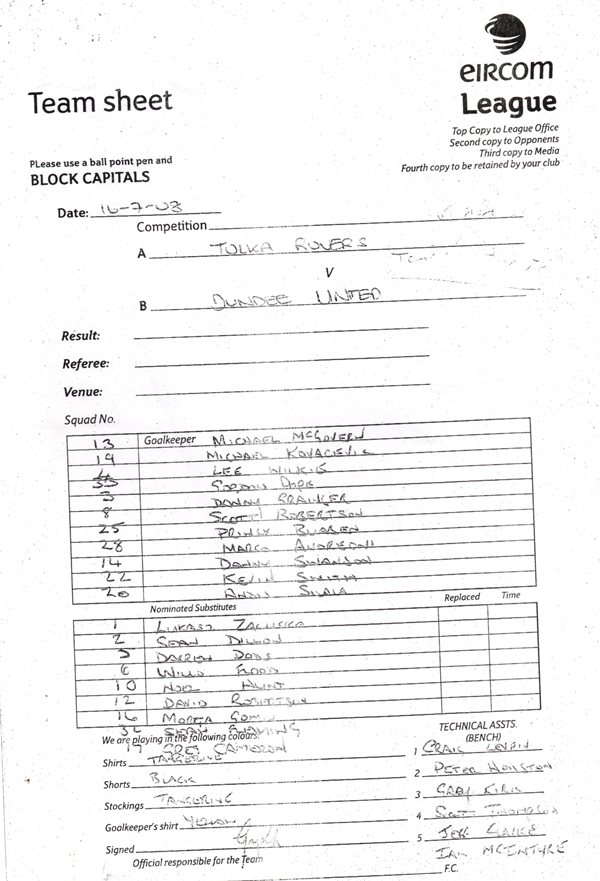 Two late goals were required by United to finally overcome the stubborn resistance of the top-rated Irish non-league club at Frank Cooke Park this. Lee Wilkie was the Tangerines’ hero twice cancelling out goals by the hosts. Defeat was staring Craig Levein’s men in the face when the United skipper headed his second seven minutes from the end with Noel Hunt grabbing a winner two minutes later. For the second and final match in the Emeraled Isle, Craig Levein utilised an entirely different starting eleven from the one that lost to UCD. Michael McGovern was in goal and in front of him was a back four of Kovacevic, Wilkie, Pope (involved fro the first time) and Grainger. In a diamond midfield, Scott Robertson was the anchor man with Andreoni and Buaben in central midfield with Swanson playing off the front. The front two were Smith and Shala.

Their Leinster Senior League opponents shocked United by taking the lead after only two minutes. Dean Kelly was sent clear by David Lacy and stroked the ball past the advancing McGovern from 12 yards. Four minutes later, Andis Shala went close, his shot on then turn being deflected over. Having taken a firm grasp on the game it was no surprise when United levelled after 11 minutes. Shala’s cross from the right wasn’t cleared properly and Wilkie’s looping header from ten yard found the net. Although under the cosh, Tolka did threaten in their rare breaks, but their claims for a penalty after Gerard McCarthey theatrically went down after a Danny Grainger challenge only earned a yellow card for the home man. Two minutes from the interval McCarthy was the home hero, clearing off the line after a Lee Wilke header instigated chaos in the Irish goalmouth. However, it was Rovers who went in ahead at the break, when Alan Connor capitalised on defensive confusion, to flick the ball over the advancing keeper before slipping the ball into the empty net.

In the second half, continued with United well on top, but Tolka looking dangerous in their rare forays upfield Indeed, there was an almighty let off for Craig Levein’s men six minutes after the re-start as Lacy sent a diving header from Mulready’s cross wide with the goals at his apparent mercy. As in the first game, substitutions littered the second period, and although United remained well in control, it was without testing the keeper too often. However, United finally made the breakthrough with seven minutes left, shortly after the introduction of Irish duo Willo Flood and Noel Hunt, though neither were involved in the equaliser. Kevin Smith was fouled out on the left and from Swanson’s free-kick, Wilkie towered above everyone to despatch a header in off the underside of the bar from ten yards. Having scored a face-saving goals, United went one better two minutes later. Again it was a header, but this time the ammunition came from the right, Smith’s header from Kovacevic touched home by Hunt’s head.

Whilst United made hard work of winning this game, these are very early days and with two entirely different elevens on view over the two games, getting playing time under the belts for the whole squad was the sole object of the exercise during the course of the two games over here, meaning the trip fully served its purpose.