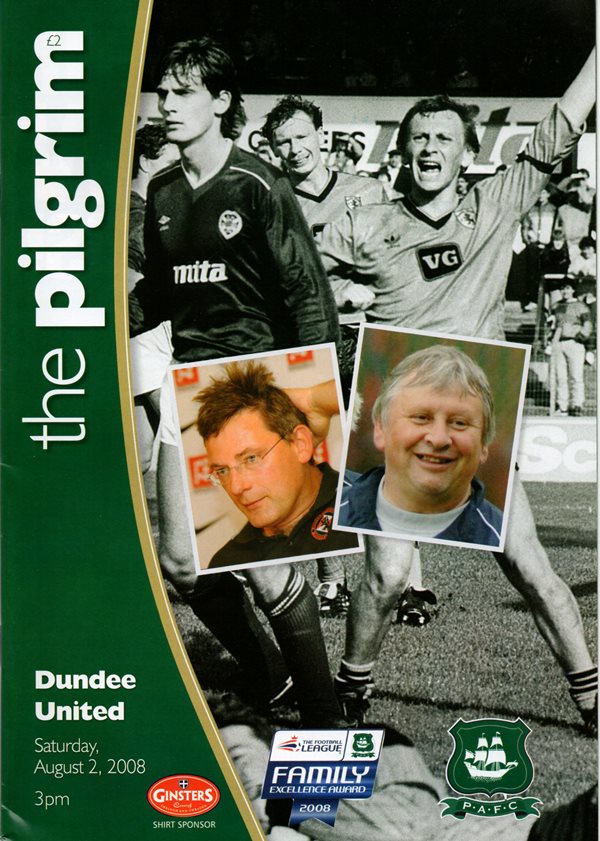 History may show that the Spanish Armada may have come a cropper off the shores of Plymouth, but it was United’s Spanish striker who downed the Pilgrims with a very well taken strike after a good move from a United side who dominated for large parts of the second half.

Manager Craig Levein had spoken about his anticipation of a physical contest against a side containing the characteristic strength, height and power of an English Championship side.

Levein was spot on as the first half saw two sides enjoying a hard fought battle, with plenty of full blooded challenges and plenty of aerial duels contested all over the park.

United started unchanged from the starting line-up which featured against Barcelona, so it was an all-Ireland strike partnership once again; Warren Feeney from Northern Ireland partnered by Eire’s Jon Daly.

Tall New Zealander Rory Fallon was providing a challenge for the centre half pairing of Wilkie and Dods, while Jon Daly was relishing his own physical battle with former Hibs man Mathias Kouo Doumbe.

The goalless scoreline at the end of the first half was largely down to Lukasz Zaluska, who pulled off a tremendous save six minutes before the break. A Luke Summerfield free kick was diverted goalwards by Argyle captain Krisztian Timar. The ball seemed destined for the far corner of the net until a full stretch Zaluska clawed the ball away well.

That incident came four minutes after United’s best chance of the first half, when a Grainger free kick had caused problems for the Plymouth defence, with the ball eventually breaking back to Prince Buaben who shot wide from the edge of the area.

Sandaza is still working towards match fitness, and he was given the second half to build this up in place of Jon Daly.

Eighty-eight seconds into his introduction came the only goal of the game. Gomis and Feeney combined in midfield, before Willo Flood flicked the ball through into the left channel for the Spaniard.

He cut inside before measuring a tremendous shot past goalkeeper Graham Stack, who had replaced Roman Larrieu at half time for the Pilgrims.

The second half was punctuated by the expected raft of substitutions in the pre-season friendly, the vast majority of them from Plymouth, who are not quite as advanced in their preparations and Paul Sturrock obviously wanted to find out more about the players at his disposal.

United could have doubled the lead on 64 minutes, when Feeney just failed to get a touch after a Grainger long throw had found its way beyond Dods, Sandaza and two Plymouth defenders, and five minutes later Sandaza saw a shot well blocked by Stack after Doumbe had prevented Scott Robertson getting a shot on goal.

Sandaza again came close ten minutes from the end, as he failed to get enough of a touch onto a low cross, the ball trickling agonisingly wide across the face of goal.

Substitute Jason Puncheon provided some spark for the home side, the former Barnet man causing problems with his pace down the Plymouth right. The substitute shot wide from outside the area with seven minutes remaining, before fellow substitute Yala Balasie shot wildly into the stand in injury time as Plymouth fought in vain for an equaliser.

The travelling United fans were certainly in good voice throughout, and brought many home observers to a halt after the game as they refused to leave the ground until they could pay homage to Tannadice hero Paul Sturrock, who duly obliged and returned to take their acclaim.