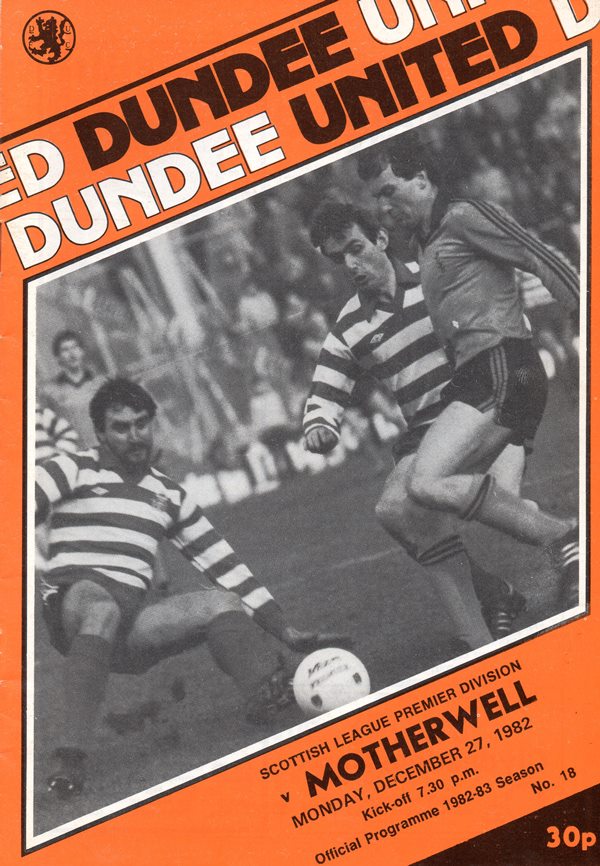 With Aberdeen having won their match against Kilmarnock, which had kicked off in the afternoon, United had to win their evening home match against Motherwell to regain second place in the Premier Division. Manager Jim McLean stuck with the same line-up that defeated Morton before Christmas.

Despite incessant United pressure during the opening 10 minutes, it took an instinctive save by Hamish McAlpine to preserve the status quo. A Forbes through-ball in 11 minutes caught Richard Gough out of position and McAlpine had to race from his line to block Gahagan's effort with his leg. The game turned within 60 seconds of the half hour mark. McAlpine produced a superb save to divert a wayward header from teammate Derek Stark, and a minute later Paul Sturrock sent Stark clear down the right, and his perfect low cross was fired past Sproat by Ralph Milne to put United in front. Four minutes later United doubled their lead when MacLeod pulled down Sturrock near the bye-line and Eamonn Bannon scored comfortably from the penalty spot.

The third goal came in the 50th minute when Sturrock slammed a first-timer against the cross bar and John Reilly was on hand to hook in the rebound from a couple of yards out. Four minutes later, captain Paul Hegarty made it four, powerfully heading past Sproat at the near post from a Milne free-kick. Paul Sturrock scored United's fifth when he bundled the ball over the line after a Davie Dodds cross had ricocheted off Forsyth. It might have been 6-0 before the end as Hegarty shot past the post from around 6 yards. The final whistle must have been a relief to the weary and outclassed men from Fir Park, who now have a mountain to climb to get clear of the relegation zone. The win ensured that United's displacement from second spot by Aberdeen was only temporary, and the performance earning the team a standing ovation at the end.

Firstly at this festive period I would like to take this opportunity of wishing every one of you a very Merry Christmas, and I trust all of you have had an enjoyable time. As is appropriate at this time of year, I would like to give my thanks to those who have helped make this year such a success. First and foremost I must turn to the players and the way in which they have worked so hard for each other. The result in Bremen typified their resolve that has taken the club through 39 matches since the start of the season with only three reversals despite a hectic programme. The Reserves, too, can claim almost as equally an impressive record with just four defeats in 30 outings all told. The efforts of the playing staff have, however, been matched by your truly magnificent support. Apart from the welcome increase in our travelling support it has been heartening to see yet further growth in our home attendances. That is so vital with clubs retaining their home gates and it is even more impressive when you consider that Rangers have had only 7,000 to 8,000 for some games and Dundee could only attract 6.528 for Aberdeen's visit in their last home outing. You can well understand the satisfaction derived by players, directors and staff alike at the public's response to their efforts.

In my 11 years at Tannadice, the Directors have rarely overruled me. In fact, I have been accorded 100% backing during that period. The rare occasions on which they have prevailed have meant that players such as Paul Hegarty, Dave Narey and Paul Sturrock have remained at Tannadice contrary to my original inclinations. I must also express my thanks to the Press. As the gentlemen of the media will, I am sure, quickly agree, I have hardly been patronising towards them. Therefore the good publicity received by the club in the past two seasons and, in particular, this term, is all the more satisfactory. More importantly it reflects tremendous credit on the achievements by the players. Commendable as our progress has been this season, as far as I am concerned, we can still do better and I will be looking for even more in 1983. The League Cup defeat by Celtic has, to date, been the only major setback and that was lost at Parkhead when Paul Sturrock was an absentee, rather than at Tannadice. However, the major trophies are still to be contested and we must continue our improvement if we are to be amongst the honours and, hopefully, with luck this is within our capabilities. Tonight we face a difficult tussle with Jock Wallace's side and I hope that the match will take place in conditions that will give you, the paying spectators, full value for money.