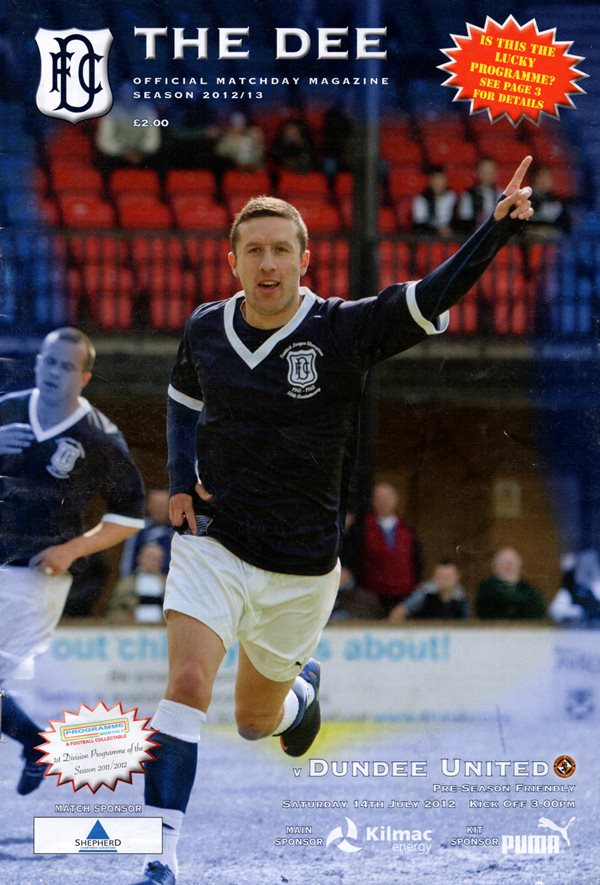 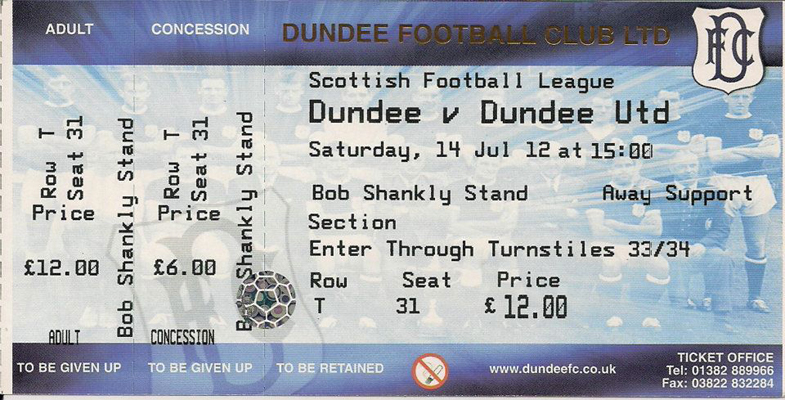 Dundee United strolled to an impressive derby victory as a fantastic display from Jon Daly saw the big Irishman grab a hat-trick.

It was the first fixture between the sides in four years, and United at times outclassed their old rivals with a convincing display.

Manager Peter Houston got the 2012-13 domestic preparations underway by handing debuts to goalkeeper Radoslaw Cierznik and centre half Brian McLean, while fellow new signings Mark Millar and Michael Gardyne had to settle for a place on the bench.

With the league season and a Europa qualifier just around the corner, both sides fielded strong sides in what certainly felt like much more than a pre-season friendly, in front of a packed Dens Park.

United, wearing the 2011/12 tangerine home shirt with black shorts, were roared onto the pitch by an impressively vocal support of around 4200 in the sell-out away end, who covered the pitch in tickertape and beach balls as the players came out.

The Tangerines recovered from an early shock to stroll into the lead. Dundee attacked first, with Iain Davidson breaking from the kick-off and squaring for John Baird, who struck an effort just wide of the post. However, it was to be United responded well with Willo Flood lofting in a free kick from the left that last season’s top scorer Jon Daly did well to stoop low and head beyond Robert Douglas.

In a fiery start, Dundee tried their best to respond immediately and Baird had another chance when he was set through one-on-one with Radoslaw Cierznik, only for the Pole to make a sensational stop. In an exciting opening to the match, United then threatened again at the other end, with John Rankin’s shot from a tight angle on the right being turned behind for a corner by Douglas. United kept threatening and Dundee escaped a penalty claim for handball in the box, then Douglas had to take three attempts to get hold of a Gary Mackay-Steven cross.

United were treating their fans to some great football and Daly knocked down a header in the centre of the park to Rankin, who then unleashed the pacy Mackay-Steven, who sped through on goal only for Douglas to save at his feet. Daly then tested Douglas with a side footed effort that the veteran keeper saved well, before Dundee defender Declan Gallacher came close when the ball struck him in the box and looped just wide of the post.

Mackay-Steven was causing all sorts of problems for the Dundee defence and he danced past McGregor before crossing for Rankin, whose shot was deflected and fell for Russell, only for McGregor to just get his foot to the ball ahead of Russell and deflect behind.

When Dundee did attack, Cierznik was looking lively and commanding in his area, and did well to fist away a Nicky Riley cross with just under 15 minuted of the first half to go.
As half time approached, Dundee began to exert some pressure, although the United back four stood up well to a series of crosses and corners and were never overly troubled by the home side’s exertions.

United came out quickly to grab the lead and it was a rip-roaring first 20 minutes of action, with United playing some great stuff. However, as the game progressed towards half time, the goalmouth action slowed, although United’s defence standing up well to some continued Dundee pressure.
Dundee had the first chance of the second half when they earned a free kick in a dangerous position on the edge of the box, only for Ryan Conroy to chip his effort just over the bar.
Seven minutes into the second half and Peter Houston made the first of a series of substitutions, with new signing Michael Gardyne and Stuart Armstrong given a taste of the action, in the place of Johnny Russell and Gary Mackay-Steven.

For all that the first half had been energetic and exciting, the second half seemed lacklustre and flat and didn’t quite have the same feel of a derby, as both sides struggle to find real penetration. Dundee had much of the ball in the first 20 minutes, but were struggling to really cause problems, and resorted to calls for a penalty when Baird failed to connect to a cross amid claims of a push from Gunning.

Ryan Conroy was next to try his luck, with an ambitious long-range drive spinning just wide of the post. United, who had brought on Mark Millar, then came close when Gardyne did well to feed Daly, only for his effort to be tipped past the post by Douglas.

With the game entering the final 10 minutes, United upped the tempo again and put the game beyond doubt with two quick goals. First, Michael Gardyne played the ball into the box to Daly, and the big striker powerfully drove the ball beyond Douglas. Just a minute later, United put the icing on the cake as Ryan Dow raced down the left and centred for Daly, who completed an impressive hatrick with a fine finish.

As Dundee pressed for a consolation, Brian McLean put in some sterling work at the back, twice throwing himself in front of the ball to deny goalscoring opportunities, but there was never any doubt that it would be United’s day.