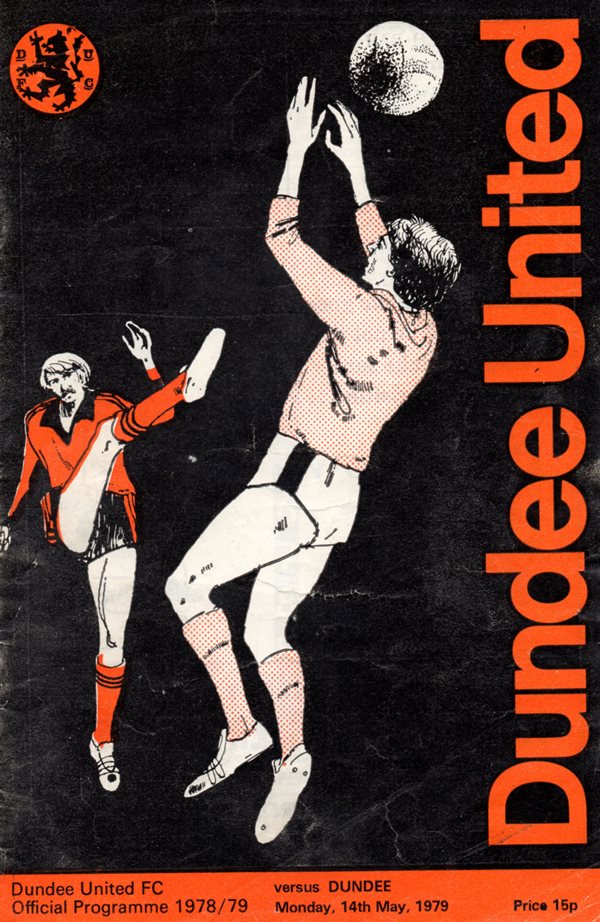 A bumper crowd of 12,170 turned up at Tannadice to see this Forfarshire Cup final and with Dundee winning promotion to the top league it would be the first of many in coming 12 months. Such was the excitement surrounding this match, there were still long queues at the turnstiles when Dundee Kicked the match off.

The tension showed early, with some niggly fouling, and a couple of warnings from the referee. In 6 minutes, the tangerine contingent erupted with joy when Miller tackled Dodds from behind and referee Harris promptly awarded a penalty. Ray Stewart stepped up to calmly hammer the spot kick past Donaldson. The away side tried hard to retrieve the position with some pressure, but no chances. Williamson had good try in 16 minutes, his 30 yarder being held by McAlpine at the second attempt. Just when it seemed United were beginning to put their passes together, Dundee should have scored in 28 minutes. McGeachie's shot beat McAlpine only for Stark to stop the ball on the line with a desperate lunge. The visitors equalised in 34 minutes. A long throw went across goal to James Shirra who banged in a beauty of a shot from 15 yards. Addison then missed a glorious chance and both Dodds and Payne also came close for United.

The home side did most of the pressing in the second half and Donaldson had to beat down a snap shot by Stewart. Then Fleming, dashing in, hit a Sturrock cross over the bar. Dundee were sagging bit and Dodds just failed to push home a cross from the right. New boy Ballantyne came on for Sturrock in 70 minutes and United continued to plug away in attack. Dundee were striking on the counter attack but neither side could add to their goal tally and the match went into extra-time. United went in front again in the 100th minute. Payne lobbed the ball from the right, Donaldson hesitated and Kirkwood headed the ball back. Glennie, trying to clear, hit the ball off Ian Ballantyne and the it flashed into the net. However, just on the turn around, Dundee levelled. Jim Murphy, 25 yards out, saw McAlpine off his line and hit a great shot into the top corner. Dodds thought he had scored only to find he was offside. Finally after 120 minutes, the match went to penalties.

Good evening and welcome back to Tannadice for this our final game of the season, fittingly against our newly promoted Premier League neighbours', Dundee. First of all I would like to add my congratulations to the Dens Park club on their return to the top in Scottish football and look forward to a renewal of the keen city rivalry which has prevailed between our two camps for long enough. Naturally Premier League champions is a title I would love to have had bestowed on us by this time—but that was not to be in what I felt was latterly a complete anti-climax for everyone at Tannadice. However, I would really like to end my communications with you for the season by passing on my congratulations to several parties who all but made this term one to remember at the club. Firstly, I cannot praise too highly the efforts of the players themselves in finishing what will undoubtedly be a close third to the Old Firm pair. All season they maintained a high standard of performance to prove that they were good enough to win it — had they managed the same consistency as the top two. And to you the Tannadice .support I pass on my sincere thanks for your encouragements throughout what has been for the players a renewal in the belief that fans can help lift performances on the field.

I honestly cannot remember a season in which you the fans have been more behind the side although "as usual I would pass on my wish that sometimes you would show just that little bit more patience. Nevertheless, although we could always do with more of you — you were great! Since it became clear that we were not to end up as champions I have attempted to explain away why we failed. Of one thing I am absolutely certain, it was not lack of experience as several people have forwarded as an excuse. For as far as our youngsters are concerned the days of them being wet behind the ears at the Premier League grade are long past. In today's game it's relatively easy to be a good prospect not so easy to realise that potential at the top level. Strangely enough I sat here at my desk at exactly this time last year and pondered over how we were going to improve, and I find myself repeating the process today. Buying could undoubtedly be the answer, but today's transfer market is quite honestly not a place I care to do business.