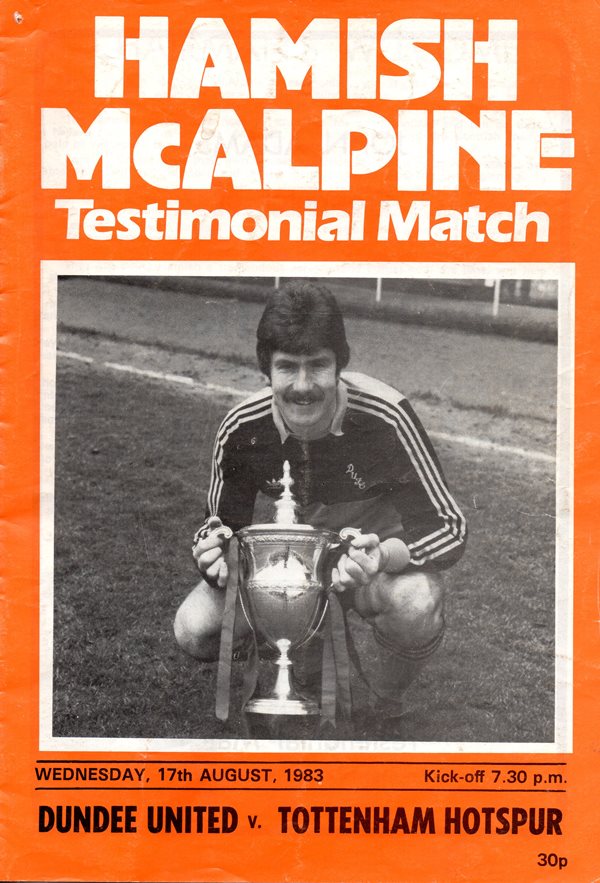 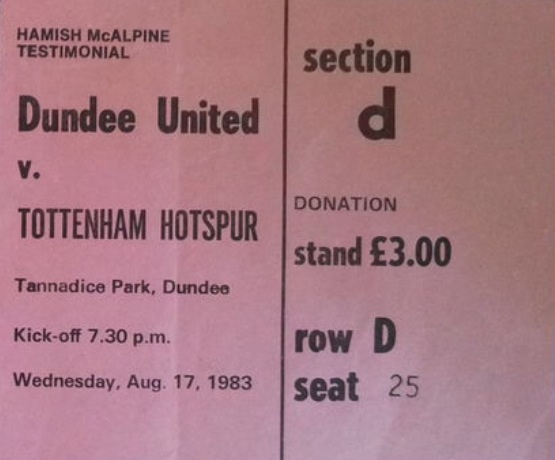 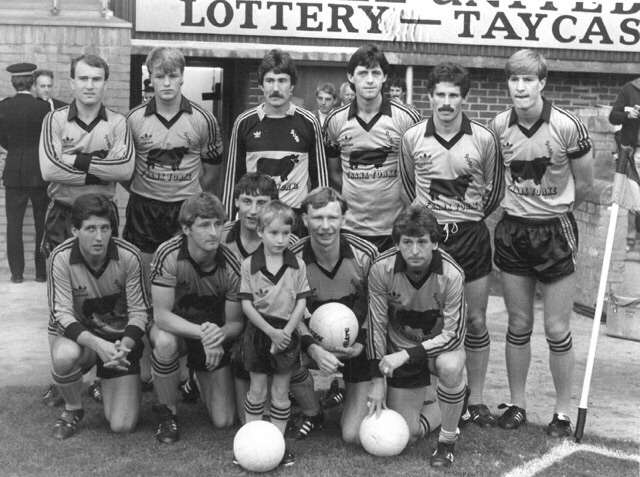 The quality of this match was a fitting tribute to Hamish McAlpine in this, his benefit match. Facing the multi-million pound talent of Spurs, United were presented with much stiffer opposition than West Ham offered the previous Saturday.

As in each of their two previous visits, Spurs took an early lead. Tony Galvin curved in a beauty from 18 yards after a fine inter-change between Falco and Archibald had created the half chance for the Spurs full-back. United replied seven minutes from half-time when John Holt crossed and young striker John Clark's looping header left Ray Clemence motionless. No further scoring came after the break though Alex Taylor struck the under side of the bar and Ralph Milne headed just over near the end.

Manager Jim McLean paid tribute to the 'keeper in his testimonial brochure, "The thing that makes Hamish McAlpine stand out among goalkeepers is his magnificent use of the ball, with hands and feet. He's among the best we have - and that includes all the outfield players. But really that shouldn't be surprising, for Hamish does most of his training as an outfield player rather than as a specialist. In fact, he has completely undermined all my beliefs in the coaching and training of 'keepers. Until I met him, I'd always been involved with goalkeepers who believed in working at their own special skills. Donald Mackay, Mike Hewitt, Thomson Allan, Ally Donaldson simply couldn't get enough goal keeping work, spending hours on taking crosses and sharpening up their handling. Hamish just doesn't want to get invoved in that kind of thing. He much prefers to play out of goal in our practice matches, and generally does the same kind of running as the outfield players. That means he has to physically work harder than any other goalkeeper in the country during the week; playing in goal on a Saturday is actually a change for him!

He'll never really convince me to change my ideas about the proper preparation for goalkeepers, but nobody can argue with Hamish about his methods. They Work. And often, when I see him hitting tremendous passes that show up a lot of his outfield team-mates, or playing a one-two with Paul Sturrock, I wonder whether he might not have made just as big a career for himself in the outfield. It's strange how Hamish gives the impression, in public, of couldn't-care-less. Anyone who visited our dressing-room after a set-back would see that his attitude is exactly the opposite. I've never met a "pro" who cares more. That shows through, too, in his service to this club. Not just in the years he has played; in the number of games he has had; or in the saves he has made. But also behind the scenes. Like any other club, we have a lot of requests from the public for the services of players. It might be to visit someone sick in hospital, or to turn up at the opening of a business. Hamish is always one of the first to volunteer - and as a club we are delighted to have such a willing and popular ambassador. He does a great job in selling this club to the public. In fact, Hamish McAlpine is a real professional, a tribute to himself, to his club, and to the game. It's a pleasure to be his boss."