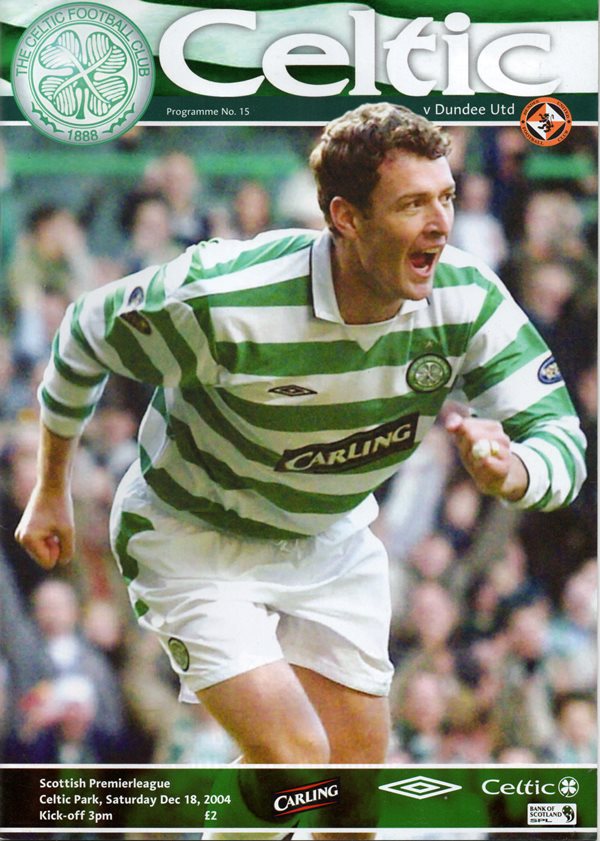 United started impressively, passing well and having more than their fair share of possession. But other than a solitary corner there was little to show for it and the first real threat came from the home side after 11 minutes – Sutton setting up a chance for Petrov at the edge of the box, and Bullock saving. The same two Celtic players combined again two minutes later, and this time Bullock was beaten – but Mark Wilson cleared Petrov’s shot off the line.

United responded with their best move, and a nice pass from Kerr released Wilson in behind the Celtic defence. His cut-back was just a little behind McIntyre, and the striker simply couldn’t get a shot in before the ball was cleared away.

Celtic’s play was a little sluggish at times and United were keeping them restricted to one or two chances from the edge of the box. The loss of the goal after 18 minutes was therefore all the more frustrating, coming from a simple Alan Thompson corner, Chris Sutton running to the near post to glance a header low past Bullock. Celtic enjoyed a more confident looking spell after this and Bullock had to tip a Balde header over following another corner.

United threatened an equaliser after 26 minutes, but Collin Samuel was just not quite able to reach a Jim McIntyre cross. Hartson then came very close for Celtic with a turn and shot: Bullock blocked with his legs but the ball seemed to be spinning high toward the net before the keeper was able to get back to his feet and punch the ball to safety. Shortly before half-time the injured Alan Thompson was replaced by Juninho.

United made one half-time substitution, Jason Scotland replacing Collin Samuel. Within a couple of minutes of the restart, Celtic were required to make a second change, with Ulrik Laursen replacing the injured Joos Valgaeren. By then, Celtic had already forced the save of the match from Bullock. Hartson found space in the box to connect with a McNamara cross, and the keeper had to dive acrobatically to his left to punch away for a corner. But United continued to pass well and after 52 minutes Scotland and McIntyre combined to pick out an excellent run from deep from Mark Kerr. His shot was blocked by Hedman. Barry Robson came agonisingly close to scoring direct from the resulting corner – for the second week running – but Hedman did well to tip the ball over the bar.

A Varga pass then put Sutton through on goal. The Englishman lobbed the onrushing Bullock – but cleared the bar as well. Immediately McIntrye had a chance to put Robson through on goal at the other end, but the final pass was poor and McNamara intercepted. Then a Laursen cut-back from the left gave Juninho a chance. His half-hit shot was almost tapped in by Hartson at the back post – but the Welshman missed from close range.

Manager Ian McCall changed things about for the last 10 minutes, bringing on Grady and Dodds for McIntyre and Kerr, Dodds slotting in behind the new front two of Scotland and Grady. But Celtic still had the better chances. A McNamara challenge on Robson left Hartson with a good opportunity from 16 yards, but again the big striker failed to hit the target. The Celtic defence looked distinctly nervy, and a last ditch Balde tackle was required to prevent Scotland from going through on goal. In the closing stages Bullock first had to save well from Juninho, then come off his line to foil Hartson. Well into stoppage time, United claimed for a penalty when Hartson handled a Mark Wilson free-kick in the box, but the linesman had already flagged for a push. United’s last chance of taking something from the game had gone.
Not for the first time this season, a good performance from United was unfortunately not backed up with points.