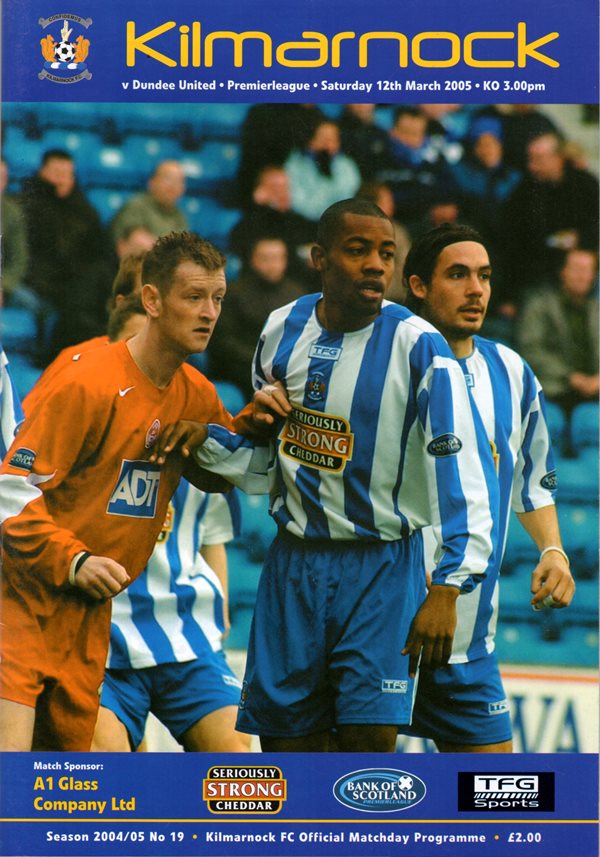 In a less than inspiring first half from both sides, the first goal threats came from the visitors. Crawford’s 13th minute cross was blocked by Hay and, from the resulting corner, Duff’s effort on goal was blocked by the Killie defence.

James Grady missed two chances in the space of five minutes, the first coming on 21 minutes when his flicked header from Wilson’s free kick was tipped round the post. Two minutes later, Grady missed an even better chance, heading tamely wide from six yards after a good cross from Wilson.

United were made to pay in the 27th minute, with Killie taking the lead through a familiar thorn in the United side. Leven put in a great cross on the right, and Kris Boyd rose well at the back post to head into the net for his sixth goal against United at Rugby Park this season.

After a spell of untidy play from both sides, United were handed a great opportunity to get back on level terms in the 42nd minute. Brebner was felled by Lilley in the box, and referee John Underhill showed no hesitation in pointing to the spot.

Mark Wilson stepped up to take the spot kick, but Smith dived full length to his left to parry the effort. Grady had followed up, but his effort on the rebound was cleared off the line at the back post.

The only threats on goal in the first twenty minutes of the second half were from a dangerous inswinging Robson corner and a long range shot from Duff which went over the bar.

Killie responded in the 65th minute, and laid siege to the United goal for a two or three minute spell. First, Nish unleashed a shot from the right corner of the area which Kenneth blocked. Shortly afterwards, Boyd beat the offside trap to go through on Bullock, but his effort was blocked by the goalkeeper. United were still pinned back, and Naismith’s stinging effort from the edge of the area was parried well by Bullock.

Bullock saved United from falling further behind, saving Boyd’s shot after Invincible had sent the striker clear on 76 minutes, but the damage came only a minute later, when Robson tripped McDonald in the area. Boyd stepped up and scored with the resulting penalty.

Two minutes later, Boyd had another effort disallowed for offside. Having now scored seven and had two disallowed against United in two matches at Rugby Park, United were spared further damage when the forward was substituted with seven minutes remaining.