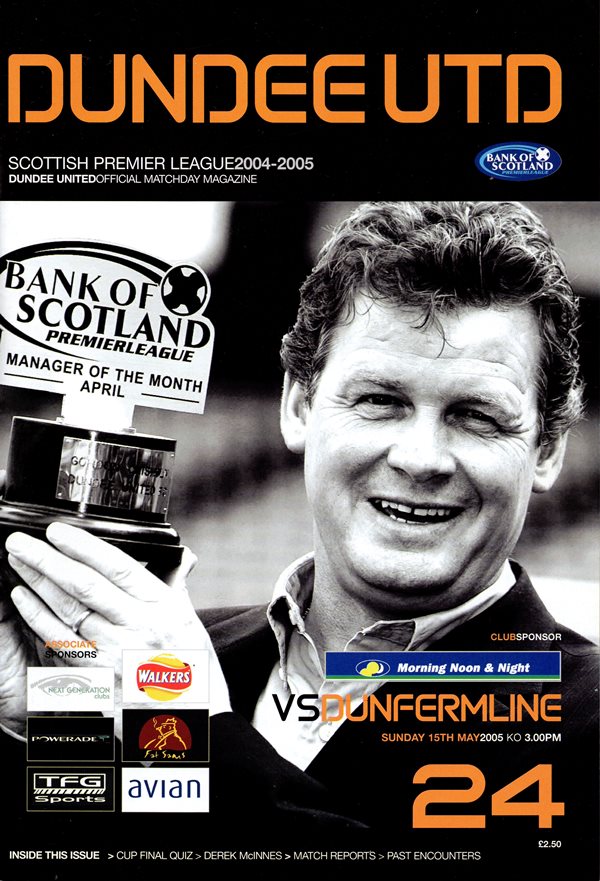 In a crucial match where both sides were led by caretaker Managers, a positive for both Chisholm and Jim Leishman was the ability to name unchanged line-ups from last weekend’s respective matches. For United, in addition to Grant Brebner being fit enough to start, Jason Scotland had recovered sufficiently from his knee injury to take up a place on the bench. The Tangerines therefore started in a now familiar 3-5-2 formation, with Stevie Crawford retaining his place up front against his former club, alongside Jim McIntyre.

The importance of the game was shown by the frantic opening minutes, with both sides struggling to settle. Dunfermline had the first meaningful chance, after Robson was harshly penalised on the edge of his own area when Skerla appeared to have run into him. Campbell took the free kick from 22 yards out, but Bullock caught easily at his near post. United showed more towards the end of the first half, but could not find the creativity to break down the Dunfermline rearguard. The Terrors earned a number of corners over the course of the first half, but as with the Dunfermline corners at the other end, these were coped with comfortably by the respective defences.

The second half again started at a frantic pace, and in the 47th minute, Stuart Duff had a shot blocked from long range. United seemed to have some momentum, and on the 50 minute mark, Mark Wilson’s chip into the area was squared by the head of McIntyre, and Crawford stretched to send a shot into the side netting. Despite the pressure by United, the Pars thought they had broken the deadlock in the 51st minute. Craig Wilson broke down the right, and his low cross was met at the 18-yard line by Ritchie, but broke to Derek Young who shot into the net. However, although it looked to the Pars fans like Ritchie had stumbled after standing on the ball, Young had in fact tugged on the defender’s shirt, which was spotted by Stuart Dougall. There was disappointment for United in the 85th minute, when Ritchie signalled to the bench that he had a problem with his left groin. The defender was unable to continue, and McCracken came on to replace him.There was to be a heartbreaking twist after what had been a comfortable second half for the home side though. Substitute Donnelly broke down the right, and his pull back found the thigh of Gary Mason, with the United defender in close attendance, and looped over Bullock.

Now, though, Chisholm will not have the chance to rest players ahead of the cup final, as he will need every one of his players in action at the Caledonian Stadium next weekend to look for the minimum of one point which will ensure safety.