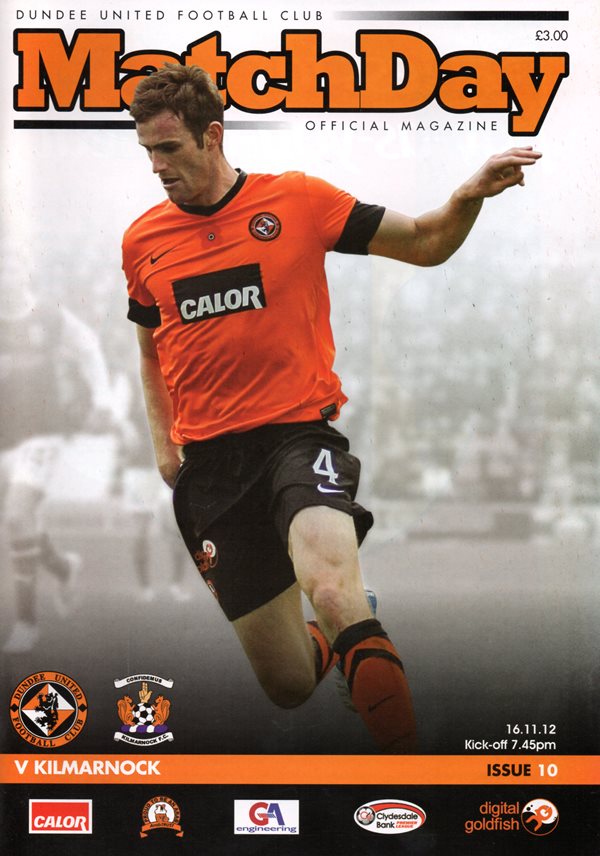 It was Friday night football at Tannadice as United hosted Kilmarnock hoping to get revenge for the 3-1 defeat at Rugby Park earlier in the season and bounce back from a 2-1 loss at Easter Road the previous weekend. There were two changes in personnel as Mark Millar and the injured Keith Watson, who was set to play up until the last minute, dropped out of the starting line-up and were replaced by Barry Douglas and Gary Mackay-Steven. Left back Douglas returned to the defence after missing the last two matches through injury with Brian McLean switching over to fill the right back void left by Watson. Mackay-Steven was making his first start since August after a long spell out with injury – Peter Houston was hoping that the creative winger would be able to continue his impressive form after scoring twice in his last three games, coming off the bench on all three occasions.

It was the visitors who were first to threaten in the opening minutes, first when a speculative curling shot from Borja Perez dropped just over Cierzniak’s goal and then it was Perez again who had an opening, this time after a mix up in the home defence, but fortunately for the Tangerines he snatched at the ball and ballooned over from 7 yards. If United were looking to make a quick start they suffered a massive blow when after 8 minutes they fell behind. Following a conceded a free kick 25 yards out, up stepped in form Killie striker Cillian Sheridan who curled an unstoppable left foot shot high into the corner of the net beyond Cierzniak. With just under quarter of an hour played, the home side made their first foray into the Killie box, with a Douglas free kick being clawed away by goalkeeper Cammy Bell who was under severe pressure from Jon Daly before Johnny Russell, making his 100th start for United, blasted over from 5 yards out after Mackay-Steven had drilled across the area having won back possession. United’s top scorer will himself have seen it as a chance he should have buried. The hosts upped the pressure and a flurry of corners followed then in the 20th minute Daly looked ready to head home at the back post if it wasn’t for a last ditch deflection off a Kilmarnock head. Gavin Gunning hooked an ambitious overhead attempt a couple of feet wide before at the other end Sheridan found space on the left side of the box only to fire well over. Bell was equal to Daly’s downward header after 24 minutes following a cross from McLean, when had the ball gone either side of the keeper a goal would surely have resulted. The hosts had certainly reacted well enough to going a goal behind but were to suffer a further blow with half an hour gone when the Ayrshire side doubled their lead. Gary Harkins broke from midfield and fed the ball to Sheridan who calmly dinked the ball over Cierzniak to grab his second goal of the game and make it 2-0 to Kilmarnock. Good inter play down the left between Rankin, Armstrong and Douglas ended with the latter playing a dangerous ball into the box which evaded everyone. McLean picked up on the right flank and floated a cross back in which broke to Mackay-Steven who got under the shot as he fired high over from 15 yards out. With 39 minutes played the Tangerines ought to have been right back in the game as Bell saved miraculously from Mackay-Steven from point blank range, after Russell had done exceptionally well to chase a lost cause and lift the ball back for Daly to head into the winger’s path.

If there was any hope for the Terrors they needed an immediate reaction after half time and they were to get just that as Gary Mackay-Steven halved the deficit 3 minutes after the break. Stuart Armstrong had already shot over the bar before Douglas showed tremendous skill to break forward from defence and play in the United winger who then drove at the heart of the Killie defence, beating all in his way, before steering a powerful right foot drive into the top corner beyond Bell. Douglas again was at the heart of things as he set up Armstrong inside the box only for Bell to block the youngster’s effort with his legs. Just as the home side were looking like grabbing an equaliser however, they suffered another blow on 52 minutes as they again fell two goals behind. Perez headed the ball into the United box and as Cierzniak came out he was beaten to the ball by Paul Heffernan who nodded into the empty net. United were in no mood to give up however and in a game that was fast becoming a classic they again closed to within a goal of the visitors. This time a cross from the left saw the slightest touch off Russell in the 6 yard box but Jon Daly was lying in wait to head the ball into the bottom corner right behind him to put the comeback firmly back on track again. There was a sequence of meaty challenges which resulted in bookings for both sides before there were appeals for a United penalty as Russell drilled the ball into the box, but a corner was rightly awarded instead. Armstrong then stung the palms of Bell with a fierce long range drive after 64 minutes before Mackay-Steven saw his cut back for substitute Rudi Skacel just blocked as the pressure again mounted on the Killie goal. There was constant probing from the Terrors, especially from Douglas, Russell and MacKay-Steven, but all too often a last ditch block or a deflection was thwarting United. A warning that another goal for the visitors would all but kill the game off in the late stages was given after 78 minutes when Sheridan again slotted into the net, this time from close range, but the offside flag had already been raised. It was then continued home pressure and inside the last 5 minutes Armstrong broke past a defender and drilled a low and inviting ball across goal that had no takers, but as the game reached injury time the goal the hosts undoubtedly deserved finally arrived. Barry Douglas, who had been outstanding, delivered yet another pin point cross from the left flank which Gunning directed into the goalmouth for Jon Daly to nod home his second of the night, sending the home fans into raptures. They continued to push in the remaining moments but couldn’t find the winner that would have further capped what was a remarkable evening.