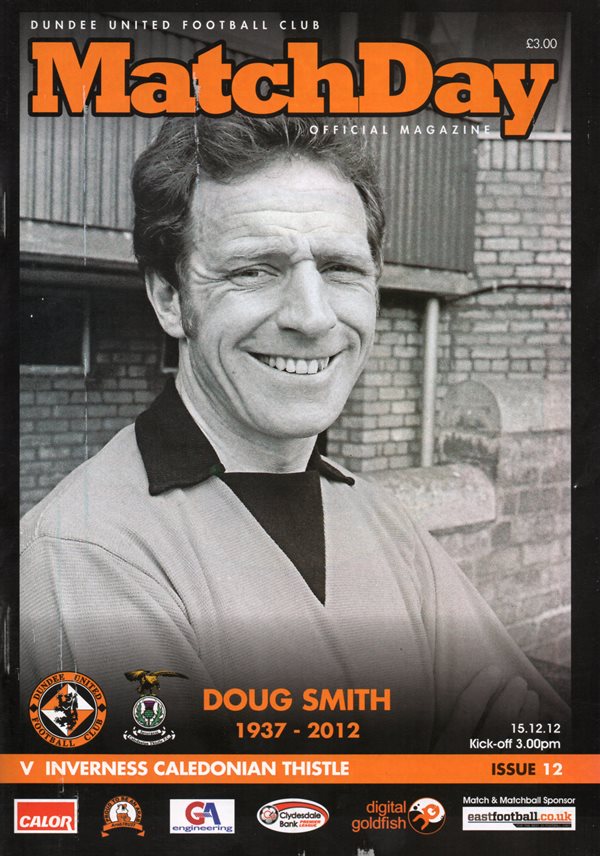 Both sides started today’s match on the back of impressive victories in their respective derby matches. With five points separating the sides before the game, United knew a home win would edge them closer to Inverness and also more than likely push themselves into the top six for the first time since the early stages of the season. Having scored eight goals in their previous two matches without reply, Manager Peter Houston elected to stay loyal to the team that were victorious at Dens Park. It was a measure of the good form both sides have shown of late that Terry Butcher also named an unchanged team.

United made a great start to the game. Defending the Shed end, they broke forward on the left side four minutes into the match. Some fantastic one touch interplay between Armstrong, Russell and Douglas resulted in a dangerous cross from the edge of the penalty area. Jon Daly was waiting in the centre and was delighted, if a little fortunate, to see his miscued effort diverted into the Caley net by Josh Meekings. With the fans still on their feet saluting the opening goal, United went two goals in front. A seemingly harmless situation in the Inverness box resulted in a freak goal. A mix up between Reguero and Shinnie ended with the keeper smashing a clearance off the on-rushing Jon Daly and the ball flew into the empty net. Daly wheeled away in celebration, grateful for his second gift in a matter of minutes. In a sensational start to the game, United added a third goal after only seven minutes. Armstrong, continuing his good form of late, played in Rudi Skácel on the right side of the box. The midfielder took a few strides toward goal then fired a low shot past Reguero for his first goal for the Tangerines. United were dominant at this stage and continued to attack the shell shocked Inverness defence. In fifteen minutes John Rankin came close. A neat lay off at the edge of the box by Skacel gave the midfielder space to strike a powerful effort goal bound. The Caley keeper had to react quickly to parry away for a corner. From the resultant set piece, a Daly header was touched over the bar. United continued to press and seconds later from another corner, Gunning headed over when it looked easier to score. A McLean head flick gave the Irish defender a clear sight of goal, but he could not keep his header down from just 4 yards out. Just as it looked like United could go on to record their biggest win of the season, Inverness scored a goal against the run of play. Midway through the first half, Richie Foran made space at the corner of the United area and his shot was redirected into the net by a clever header from in form striker Billy McKay. As United had done in the opening stages of the game, Caley doubled their tally just two minutes later. It was McKay on the score sheet again following a good corner by Doran. After the astonishing events of the opening half hour, Skacel almost further added to the drama five minutes from the break. He raced onto a long diagonal ball and from the left touchline attempted an audacious looping effort that evaded the keeper but flashed just past the post. Skacel was a threat throughout the first half and just before the interval he made space on the penalty spot only to screw a left foot shot past the post, under defensive pressure. This was the last chance of an enthralling first half in which only two yellow cards were awarded; Johnny Russell the recipient for United and Doran for Caley.

The start to the second half was more subdued to that of the first and the opening minutes passed by with neither team threatening. It was thirteen minutes into the second period before United created a chance. Daly, in an unfamiliar right wing position, drove a low cross into the six yard box. Caley defender Warren had his keeper to thank when Reguero saved his intercept. Russell hit the rebound into the side netting. With an hour played, Inverness capped a stunning comeback. Flood was penalised when he leant on the back of Draper in the United box and as the midfielder crashed to the turf the referee pointed to the spot. Billy McKay took advantage and sent the keeper the wrong way to collect his hat-trick. Gardyne replaced Armstrong midway through the second half and gradually United took control of the game again. Although having most of the possession, the Tangerines were finding it hard to carve out any openings. It was Inverness who created most of the second half chances and their height was posing problems to the United rear guard. It came as no surprise that when they did eventually score it came from a header. After threatening with a couple of headed attempts from set plays, Gary Warren finally cashed in when he was able to head strongly past Cierzniak and in off the post. With only five minutes remaining, it looked over for United. However, Captain Jon Daly continued to battle away and with only seconds left of regulation time he had a great effort saved by Reguero. To cap a breathtaking match, United earned a penalty in injury time. A hand ball in the Inverness penalty area provided Jon Daly with the chance to get his second goal of the game. The big striker made no mistake from the spot and earned his side a share of the spoils.