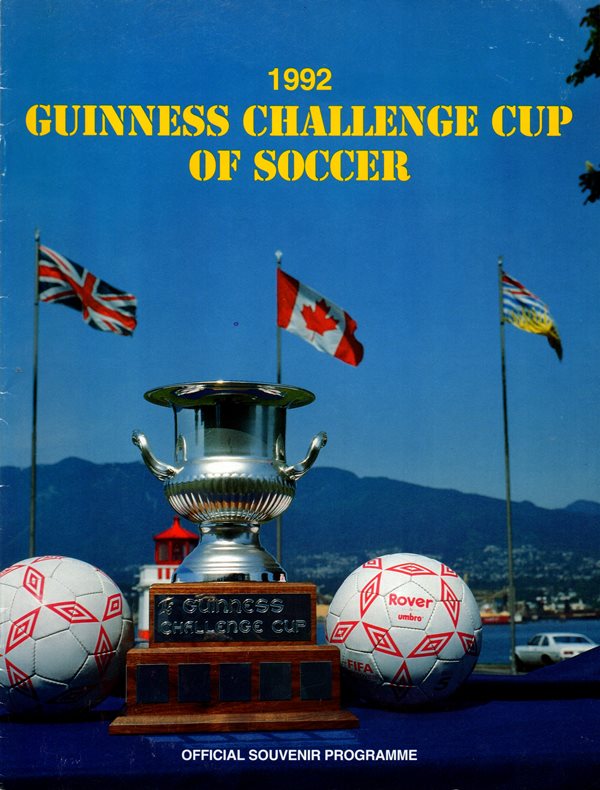 Almost immediately after the 91-92 campaign came to a close, a squad of 16 players (though minus the contingent of four internationalist) jetted off to Canada to participate in the 1992 Guiness Challenge Cup. This was a round robin trophy which was staged at Swanguard Park in Vancouver and Athletic Park on the nearby Vancouver Island.

As the name of the trophy obviously implies Guiness sponsored the tournament which the organisers envisage as being an annual event. Friends of Soccer 92 plan to bring in overseas teams on an annual basis for what is a three nation tournament. The introduction of the Guiness Challenge Cup coincided with the 25th anniversary of the start of professional soccer in Vancouver. Back in May 1967, the North American Soccer League got underway with Vancouver a charter member.

That year overseas teams kicked off the newly formed League representing the various cities. Sunderland was Vancouver's guest side, whilst United played in Dallas as Tornadoes. Indeed, our only other visit to Vancouver had been during that inaugural season when we went down 4-1 to the Wearsiders in 1967.

The organisers of the current tournament viewed it as a means of allowing Canadian fans to guage how their local favourites have progressed against top class opposition. On the evidence of our opening match against Vancouver 86ERS, the Canadian champions for the past four seasons are a workmanlike and methodical side, but they are regarded as being by far and away the best side not only in Canada, but the whole of North America, especially as the American Professional League is played during the summer, but now features only six clubs and is the final vestige of professional soccer in North America.

Our visit was part of the '86ERS build up to their new season which opened up against Winnipeg Fury the Sunday after we departed. There were only two familiar names in 86ERS line-up. The veteran Carl Valentine who played for Oldham and West Bromwich Albion, is now in the veteran stage, but still a current Canadian Internationalist.

Even more familiar to Tannadice fans was Jim Easton. Jim had a season or so at Tannadice in the mid-eighties. He was playing for the 86ERS for the first time since the Mita Cup Final in October 1989. He then spent the 1990 CSL season on loan to Hamilton and had to sit out the 1991 campaign following knee surgery.

Certainly, we got off to an excellent start to our opening fixture with a goal after only three minutes when Christian Dailly's far flung cross from the right was headed home by Allan Preston as he ran in at the far post. Our quick-fire passing game reduced 86ERS to mere spectators in those early minutes, but we let the home side back into the match fourteen minutes later when Mobilio, their Canadian International striker, took advantage of some slackness in our defence to turn and drill a low shot past Alan Main from ten yards.

Although on top for the remainder of the half we failed to penetrate the Canadian defence. After starting with a 3—4—3 formation with Edison Machin, Dave Narey and Freddy Van der Hoorn in a back three, coach Paul Sturrock reverted to a 4—3—3 set up at half-time. He brought on John Clark for Grant Johnson and whilst the defensive formation settled in, 86ERS enjoyed their best period of the game, forcing two great saves from Alan Main before Saundh hit the post with a shot from the edge of the box.

From then on, however, it was a story of total Tangerine domination and the only mystery was how we failed to score again. Somehow Paul Dolan, the 86ERS 'keeper miraculously kept out a Victor Ferreyra effort from point blank range after the bail had come down off the post. John O'Neil then saw his shot diverted on to the bar.

Christian Dailly twice found himself on a one-on-one situation pushing the ball wide on the first occasion and seeing his shot blocked nine minutes later. Five minutes from time Dolan made a fine stop from John Clark s shot on the turn. However, we looked certain to score in the last minute when Alex Cleland reached a John O'Neil cross, but his header hit the inside of the post and was scrambled clear to deny us would have been a deserved victory.