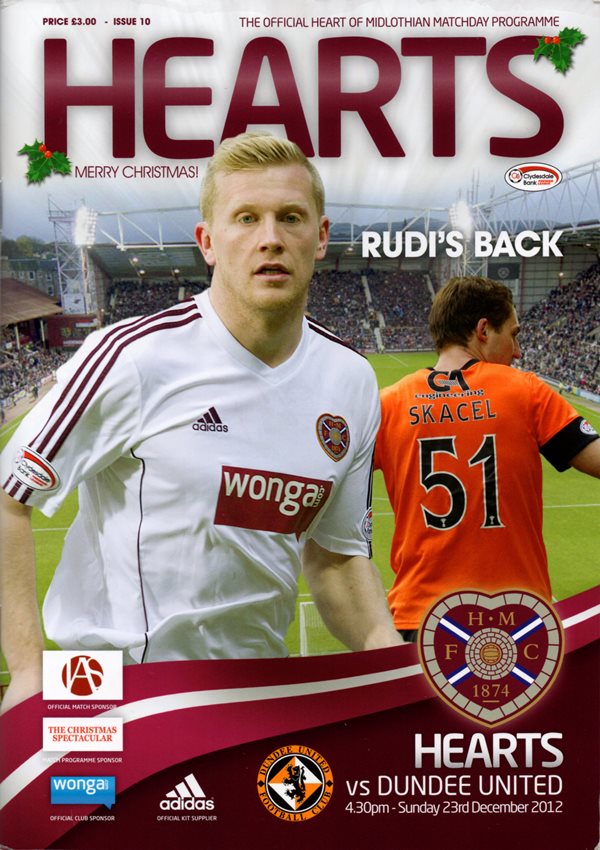 Dundee United were denied another breathtaking comeback as they narrowly lost out to Hearts in a Christmas cracker at Tynecastle.

The two sides served up a festive feast for the fans just two days before Christmas, as the play raged from one end to the other in an utterly absorbing encounter.

Hearts had given themselves a commanding two goal lead in the first half hour through a double from Ryan Stevenson. United never looked down and out but couldn’t add to a solitary Keith Watson strike early in the second half.

After scoring 12 goals in the previous three games, including last week’s 4-4 thriller with Inverness, Manager Peter Houston named the same starting line-up for a fourth successive match. In truth it could have been another 4-4, given the number of chances at both ends.

Rudi Skacel took his place in the United midfield as he returned to Tynecastle for the first time since leaving Hearts, and he was made to feel welcome by the home support, who loudly cheered his name when it was read out before kick-off then again in the 51st minute.

A cagey start had given no sign of the drama that was to come, with United taking some time to get going.

The first warning from Hearts came when Gunning just got in ahead of Driver to clear for a corner. United managed to clear but it wasn’t long before the ball was back in the danger area and this time Hearts took their chance, as McLean failed to get rid of the ball when John Sutton bore down on him, then Ryan Stevenson coolly slotted home.

United nearly got themselves back level immediately, as Barry Douglas played an outstanding ball in from the left which Jon Daly got on the end of, only to be foiled by a breathtaking save from Jamie MacDonald. Brian McLean looked certain to turn away the rebound but his effort cracked off the post and cannoned over the bar.

Despite starting to show signs of getting back into the game, United were looking extremely vulnerable to fast counter-attacks by the home side. That was demonstrated when a Gavin Gunning free kick was blocked, then Hearts sprinted to the other side of the park, with John Rankin sliding in brilliantly to block a pass into the area by Andy Driver that would have given Sutton a great chance.

With United’s midfield starting to get a grip on the game, they came close to a leveller just before the half hour as a mishit cross from Douglas nearly ended up in the net. Just a minute later, though, defensive vulnerability was again exposed, as Craig Thomson pointed to the penalty spot when Willo Flood held onto Dylan McGowan. Ryan Stevenson coolly passed the ball into the left corner of the net from the spot, sending Cierzniak the wrong way to give Hearts a commanding 2-0 lead.

Having thrown away a 3-0 lead last week, it was United that now needed to come back from the dead. Keith Watson, who had been United’s biggest threat from wide areas, delivered a good cross from the right but Daly couldn’t quite find enough space to get any power on his header, which MacDonald saved.

As half-time approached, United tried to find a way back into the game. First, no-one was able to get on the end of Armstrong’s fine cutback, then a rasping effort from Russell soared over the bar.

United started the second half in positive mood and a dangerous cross from Douglas was cleared for a corner as Daly waited to pounce, then McLean headed a good Flood cross from the right over the bar.

With just over 10 minutes of the second half gone, United – who had survived a couple of scares from defensive errors – then managed to find their way back into the match, as Skacel’s mis-hit shot landed at the feet of Keith Watson, who showed great composure to turn and loft a great left-footed effort into the top corner to leave MacDonald with no chance.

Hearts tried to regain their two-goal lead and a succession of throw-ins and corners led to a remarkable escape for United, as Gordon Smith got on the end of a cross from the right but somehow hit over by from just a few yards out.

United were continuing to look very threatening from the wide areas, and another wicked cross from the left was almost diverted into his own net by Webster, who collided with MacDonald. Soon after, there was a flashpoint as MacDonald took a knock when he dived at Daly’s feet after a fantastic through ball from Skacel.

The game had turned into something of a thriller, and a remarkable minute of action saw United almost fall 3-1 behind, as Smith fluffed a golden opportunity, then nearly got back level from the counter-attack, only for Skacel to be cynically taken down. With United players shouting for a penalty, Craig Thomson only pointed for a free kick on the line of the box, which Douglas fired off the wall.

As the game edged towards an enthralling closing 10 minutes, Webster tried luck from the edge of the box, which Cierzniak held well, before Driver became the latest Hearts player to miss a glaring opportunity, as he somehow opted to head a McGowan cross in front of goal when it looked easier to pass the ball home and the ball ended up wide of the post. Rankin then came close for United, as a low effort was held well by MacDonald, then Sutton powered in a volley that Cierzniak had to fist behind.

Another thrilling spell of action saw United press as Lacny teed up Watson but his shot was blocked, then Lacny stopped the breakaway illegally, resulting in a yellow card that the home crowd wrongly thought should have been a red.

Deep into five minutes of injury time, United looked certain to earn a dramatic point as Johnny Russell found himself clear on goal after a lofted pass evaded the Hearts defence. But the striker opted to batter in a volley that spun over the bar, meaning United – shouted on by an impressive crowd – headed back to Dundee without any points.