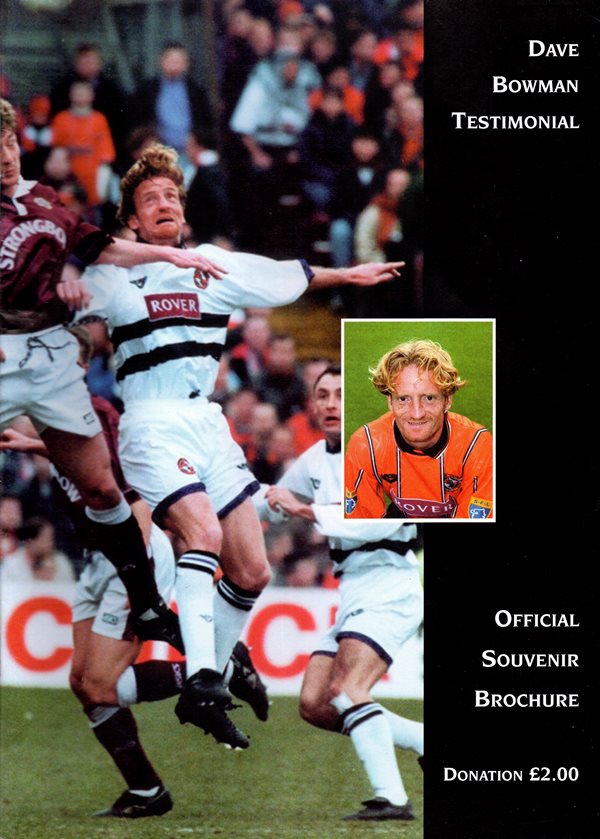 Just under 5,000 turned up on a warm sunny afternoon to pay tribute to Dave Bowman on the occasion of his Testimonial Match. No game against Dundee will ever be a friendly, no matter the circumstances and the crowd saw a good competitive match and typically of the way he plays the game, Dave Bowman was lectured by the referee along with Paul Tosh after the pair had clashed.

Dundee had the better of the chances early in the second half, but the introduction of young winger Paul Walker was to lift proceedings and provide United with their winner. After several mazy runs, Pee-Wee as he is nicknamed cut a swathe through the Dundee defence on the left and cut the ball back for Craig Brewster to strike the ball high into the net for the winner.

At the end of a satisfactory afternoon all round, man-of-the-moment Dave Bowman collected the JTC Trophy which was put up for his Testimonial Match.

Jim McLean paid tribute to Bow in the programme, "After joining Dundee United almost ten years ago, the Club has granted David Bowman a deserved Testimonial. His transfer in May 1986 from Coventry City marked one of the busiest periods in which I was engaged in the transfer market. Immediately after selling Stuart Beedie and Billy Kirkwood to Hibs, I signed both Jim Mdnally and David Bowman from the Highfield Road club. I mean no offence to Stuart Beedie (and I had better add Billy Kirkwood as he is certain to read this!), but it was almost larceny on a grand scale as their transfer to Hibs more-or-less covered our outlay to Coventry City for, as it turned out, two future Scottish internationalists.

Less than half of the six figure fee was for David's services and he has repaid that amount many times over in the past decade. During that time he has not only given his all every time he has pulled on a tangerine jersey, but has gone on to win six caps for his country. Perhaps the biggest tribute I can pay David is that every time he steps out on the park, he can be relied upon to give his best from the first whistle to the last. And that includes trying to help the referee to do his job, but as I too found, the man in the middle haven't always appreciated our efforts!

But being serious, there are many players with whom I have been proud to have worked with over the years for a variety of reasons. However, David has without doubt given me as much pleasure as any other during my managerial days. His devotion to performing at an ultimate level of performance in every game and the fact that he is a very bad loser makes him the kind of player that every manager wants in his team. In addition to that, he willingly sacrifices hours of his spare time to coach our 'S' Form signings in Edinburgh.

Now for the bad news David, you only have another ten years to go to emulate David Narey's record-breaking time at the club. Away from football, Dave is very much a family man and as most people know very partial to the odd game of golf now and again! If the truth be told he spends a lot of time on the golf course where he displays the same passion and will to win as he does on the football field. Unfortunately that isn't where the similarity ends, because he is equally as bad a finisher on the golf course as he is in front of goal! In other words, his putting matches his shooting! The only difference being that there is no nets behind the cups on the greens. Whilst I have'been unable to help him improve his goals tally, I have been able to do something for him on the golf course because he now has my putter and his putting has improved 100%! But back to a more serious note.

In recent times, much more so than in the past, the newspapers are full of stories about young players erring both on and ofFthe park. In my opinion, if all youngsters copied the attitude and commitment of David Bowman, I am sure the game in Scotland would be in far better shape than it is currently. Finally, I'd like'to wish David every success with all the events during his Testimonial Year - an honour which he most thoroughly deserves."