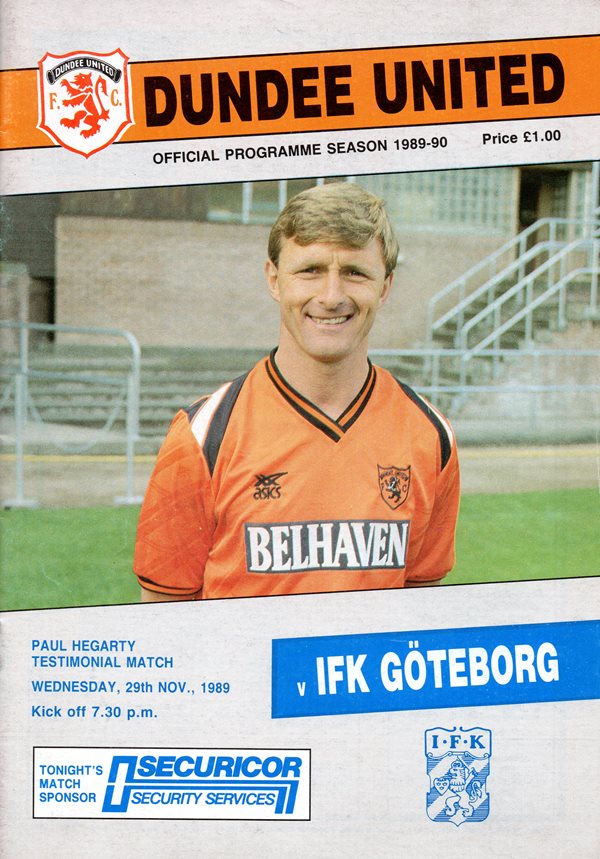 No win for United but a great night for Paul Hegarty who welcomed our Uefa Cup final opponents, Gothernburg, back to Tannadice. So once again Gothenburg left Tannadice with a Cup — this time the Discovery Cup — put up by Aberlour Whisky for Paul Hegarty's Testimonial Match. On a perfect night for football, the result was somewhat disappointing as was the turn out of 7,369 to honour one of the club's finest ever servants.

Paul, who was captain for the night, saw his colleagues totally dominate the early part of the game, but missed chances cost us dearly. Gothenburg hit us twice on the break in the second half and although a team in the course of being rebuilt, the Swedes still looked a very capable side. Seven minutes into the second half Eriksson fired in an 18 yard effort past Billy Thomson. When Eskilinen swept home a second after 74 minutes to effectively put the game beyond our reach. Perhaps indicative of the kind of evening it was for us in the closing minutes when Maurice Malpas worked his way into the box only to swipe at fresh air and land flat on his back with the goal at his mercy!

Paul was quoted in the programme that evening thanking the fans amongst a few others, "Firstly I must thank the Directors of Dundee United Football Club without whom tonight's event would not have been possible. I arrived at Tannadice as a centre forward in 1974 and thanks to manager Jim McLean and coach Wattie Smith I was moulded into a centre-half who was to enjoy a career at the top level including winning international honours. I will always be grateful to the boss and Wattie for their shrewd observation that I would make a better defender than striker.

I'd also like to thank all my colleagues past and present who have helped me throughout my career. Here I must single out my partner in defence — Dave Narey, over the past 12 years it has been a pleasure to play alongside him. We developed an almost telepathic understanding and I think we have been good for each other. I feel what we have achieved speaks for itself. Dave is such quiet unassuming chap, a very rare commodity in football these days. and I only hope I haven't given him too many of his grey hairs!

Another person to whom I owe a great deal is Andy Dickson. He is a great person for any club to have. He gives you confidence to get over an injury, because he always seems to know exactly what the problem was. I certainly had a very good understanding and relationship with Andy and he helped me greatly in coping with the grain injury which plagued me a few years ago. They say that behind every successful business man there is a woman and my wife Linda has been very supportive. She has never interfered and helped me through the few low points of my football career. I think that if you are content at home, then football takes care of itself. Whilst on a family theme I must pay tribute to my elder brother, Kevin, who has always given me sound advice whenever I have needed it.

When I first arrived at Tannadice the crowds were in the region of 4,000 to 5,000 and it has been great, not only from my point of view, but also the club's to see the support grow over the years and I'd like to extend my utmost appreciation to you, the fans, for supporting me over the past 15 years. Lastly, but certainly not least, I must pay tribute to Eddie Thompson and my Testimonial Committee for all their hard work in helping to make my Testimonial year the success it has been."

Following matches for Dave Narey and Paul Sturrock, tonight's game for Paul Hegarty marks the last of recent Testimonials for the three players who, in my opinion, should take most credit for anything Dundee United have achieved over the past 15 years. The defensive partnership of Paul and Dave Narey has undoubtedly been one of the best in Scottish football in recent years, yet it was as a striker that Paul came to us from Hamilton Accies for £27,500 in 1974. Paul, therefore, takes tremendous credit in becoming not only one of the best centre-halves to serve Dundee United, but to also go on and earn eight caps for his country. Throughout his career at Tannadice, Paul has been a magnificent professional to work with and is a credit to the game and Dundee United. During his career he has carried and helped a lot of players who have played beside him. This season, unfortunately, when Paul most needed players to help him, too many were struggling to find their own feet. Paul set the perfect example for any player to follow. His attitude whether when player or training, is totally professional. I can remember when Paul was in digs with Paul Sturrock when he first came to the club that he regularly went to bed at 8 o'clock at night, such was his dedication. I think the biggest tribute I can pay Paul is that too few young players today appear to want to give to the game what Paul has given.