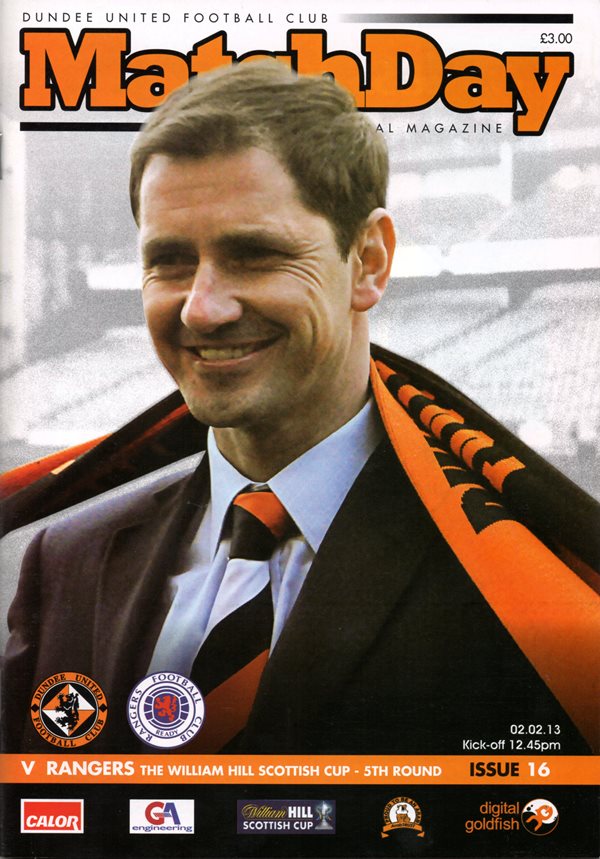 Jackie McNamara took over the reins at Tannadice and named an unchanged starting eleven for the visit of Rangers. With only two days to prepare it was perhaps unsurprising to see the same eleven that lined up against Ross County. Rangers started with a familiar face, Fran Sandaza leading the line for the visitors. After months of friction between the two clubs - with Rangers fans boycotting the game - it was time for the two sides to do their talking on the pitch.

With the game only 16 seconds old Jackie McNamara’s first game in charge started in unbelievable fashion. Gunning launched the ball from his own half and Daly climbed above the Rangers defence and flicked the ball through to Johnny Russell who shot the ball past Neil Alexander to hand United the lead. With the crowd barely settled in their seats it was almost 1-1 but Templeton dragged his shot just wide of the post. Four minutes into the match the referee made his first booking of the match when Wallace was cautioned for a trip on Gunning. Two minutes later Flood crossed from the left and Russell headed inches wide of the target. With a quarter of an hour on the clock Mackay-Steven broke down the right and Perry made a great saving clearance from his cross. A minute later United were desperately unlucky not to double their lead. Douglas floated the ball to Daly who knocked the ball into the path of Russell who clipped the ball over Alexander but his effort came back off the crossbar. Ten minutes later Sandaza should have done better for the visitors. A fine cross from the left from Wallace found the former United man but he didn’t connect properly with his header and the ball sailed wide of the target. United though were looking very strong and with 33 minutes gone Flood and Daly combined to set up Mackay-Steven who saw his shot deflected wide for a corner. Two minutes later though United did double their advantage. Gary Mackay-Steven won a free kick midway into the Rangers half. Willo Flood floated a free kick into the Rangers box and Jon Daly managed to beat the offside trap and head past a stranded Alexander. Just after that a Black corner found Sandaza but he headed straight at Cierzniak. Hutton was then booked for a foul on Mackay-Steven and from the resulting free kick Daly looped in a header that landed on the roof of the net. The final action of an entertaining half saw the unfortunate Perry limp off for Rangers and he was replaced by Christopher Hegarty.

Ally McCoist made a further change at the break when he replaced Sandaza with Kai Naismith. Three minutes after the break Flood found Russell on the right and the United striker crossed but Alexander did well to gather with Daly lurking. Six minutes later Templeton found space in the box but Watson did well to make a saving challenge and force a corner kick. Shortly after a Wallace throw in was collected by Templeton and he did well to shake off the United defence but he weakly shot wide of the target. With an hour on the clock Rangers almost pulled one back. From a corner on the left the ball came out to Ian Black and his first time stinging shot went just past the United goalpost. Templeton then again tried his luck but his low shot was well saved by the United keeper. United then made a double substitution with Mackay-Steven and Armstrong making way for Gardyne and Ryan. After a period of Rangers possession United started to dominate again and with 20 minutes left Russell skipped past the helpless Faure and sent in a low cross that found the feet of Daly but his shot was blocked by Cribari. Shiels was then booked for a late tackle on Rankin and that was to be the former Killie man’s last piece of action as shortly after he was replaced by Barrie McKay. Ian Black and Gavin Gunning then had a heated exchange in the middle of the park that resulted in both men going into referee Euan Norris’s notebook. With just over ten minutes remaining the result was put beyond any doubt with United’s front two once again combining: a Daly flick-on finding Johnny Russell in the Rangers box and with only Alexander to beat he kept his cool and slotted the ball home. With the match drawing to a close Rangers afternoon turned from bad to worse. First of all Naismith was given a straight red card for a lunge at Willo Flood and then with a couple of minutes left Ian Black was given his marching orders when he picked up a second yellow card for a foul on Rankin.

First of all can I say how thrilled I am to have been appointed Manager of Dundee United and delighted to be here. The negotiations have taken a bit longer than expected, but I am glad it is all done and I can look forward to today's game against Rangers. Obviously, I haven't had too much time to prepare for it but with Tuesday's game at Motherwell having been cancelled at least, there are no fresh injuries which is pleasing. Nevertheless I will try and prepare them as well as I can. And for my first game in charge, I really couldn't have wished for a better one. The results, of course, are all important, but I will also bring a lot of hard work and passion to the job.Believe me, I will be doing my very best, and hopefully, all our fans will come to Tannadice and enjoy watching the players expressing themselves. One of the hardest things about this move has been walking away from Patrick Thistle and it's a big risk. Equally, it's also a big risk for the club, appointing a young Manager in his second year. Simon and I had the team in a cup final and challenging for the league but as soon as I spoke to the Chairman, I knew I wanted to come to United.

I know the infrastructure here, the players they have and the training facilities. I just felt it was the right thing to do. Because it worked well, I will try to implement the things I did at Thistle. No way I going to claim we will do this or that. People will be able to see what we are trying do. It will take a time to get used to the players in training but my main aim is to have the players winning games of football will also enjoying coming to their work. There is so much that can be achieved because we want to be challenging for everything. Celtic are clear at the top at the moment, but I think we can put out a team that all our supporters can be proud of.

Today's game against Rangers is a prospect I am relishing. It is live on Sky and it is a great attraction for everybody. If you are asking if I would have preferred a week to prepare for it then obviously I would say yes because we have just had a couple of days. But that is how it is and even in that short time available, we have been fully focused on winning the tie. One of the first to phone and congratulate me was Ally McCoist, with whom I get on really well. We had a good reiationship and he is a good guy. Mind you, I never wished him all the best for Saturday though! Our paths have often crossed over the years in Old Firm games and have a lot of respect for him as a player, Manager and as a person. But you can take it, I will be wishing him all the best after the match, not before it. And above all else, I want us to start off on a very positive note with a victory over Rangers this afternoon.