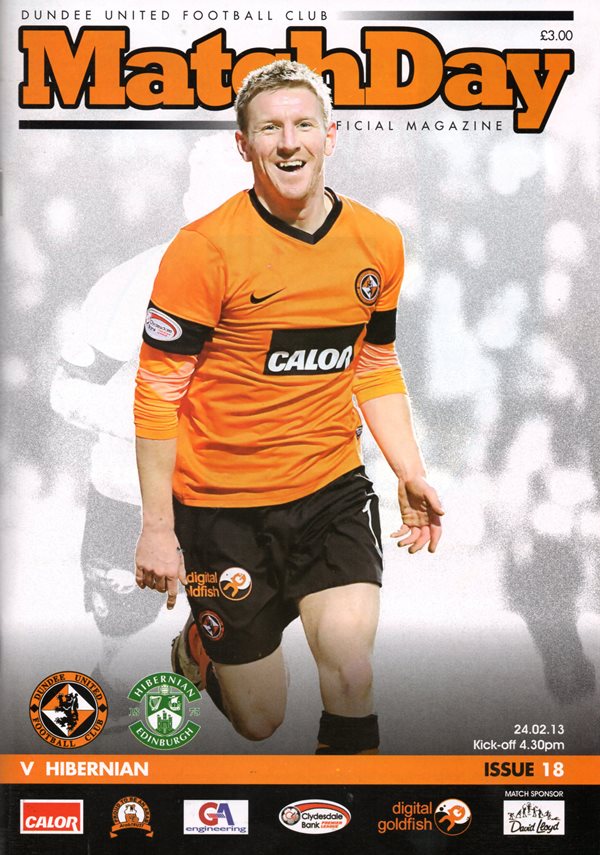 Jackie McNamara named an unchanged side following the excellent 1-0 win away at Motherwell in midweek. Captain Jon Daly continued in a defence which also included Keith Watson, notably making his 100th appearance for the club at the age of just 23. Visitors Hibs also named the same line up after winning their last outing at St Mirren. Having recently signed for the Edinburgh side, ex Tangerine Scott Robertson lined up in midfield against his former club. There was plenty at stake for both sides prior to this tasty looking encounter. A win for United would lift them up into 5th place and just 2 points away from 2nd while the visitors would draw level in 3rd with Motherwell and St Johnstone were they to come out on top.

Both sides enjoyed some early spells of possession before the Terrors continued their recent trend of netting early on. Hibs goalkeeper Ben Williams was closed down by Rankin - more in hope than expectation - after receiving a back-pass. Looking to launch the ball up-field, his clearance instead crashed off the back of John Rankin and ended up in the back of the net to the delight of the home fans. Looking for a quick response after going behind, Hibs first real effort of the match came in the 14th minute. Paul Cairney shot low towards goal from the left side of the area, with Cierzniak saving well with his legs for United. Hibs enjoyed more of the ball following the goal but when Willo Flood won possession in midfield United threatened once more. After driving forward the Irishman released Gary Mackay-Steven who tugged a low effort wide on the angle. A Leigh Griffiths shot from distance was easily held by Cierzniak before the hosts had another chance. A quick throw in from Johnny Russell allowed Mackay-Steven to venture into the box. He played the ball back for Stuart Armstrong outside the area and his well struck left foot drive flew only a foot or so off target, with a quarter of the game gone. Soon after Hibs were back on level terms following what looked a harsh free kick awarded against Watson. Griffiths delivered the ball into the area and James McPake glanced the ball into the far corner of the net despite the efforts of the onrushing Cierzniak. The Tangerines were struggling to hold onto possession as Hibs pressed and Daly had to block a fierce drive from Cairney on 30 minutes. Chances became less frequent with United struggling to get forward, and Griffiths went close with a long range shot in the 40th minute which skimmed the roof of the net on its way over. The on form Hibs man went even closer right on half time, taking the ball in from the left after winning possession from Armstrong, with Cierzniak touching a fierce drive into the side netting and away from safety. There was no doubt the hosts would be happy to go in at half time still level having been on the back foot for much of the opening period.

It was a more positive United after the break, making several forays into the Hibs box, but it was the visitors who went ahead in 51 minutes. Leigh Griffiths broke from half way, shadowed by Rankin, before cutting outside and drilling a powerful strike into the net from 25 yards. There seemed to be plenty of movement on the ball but Cierzniak will have been disappointed not to prevent the goal. Chasing the game, McNamara moved Daly back up front to partner Russell with Barry Douglas coming on in place of Richie Ryan and Sean Dillon moved to centre half. Almost immediately a Douglas free kick from the right was headed over by Watson as the hosts sought a route back into the game. It then took a superb saving challenge from Watson on Cairney, who looked set to score for Hibs after taking a Griffiths pass, to prevent further damage for United. After good build up from the hosts, Rankin shot from long range in the 68th minute and wasn’t far off target from around 25 yards. Armstrong then saw a header from a Watson cross tipped over by Williams as they chased an equaliser. The home side continued to push forward late on although chances were a rarity in what had become a scrappy match. In the 83rd minute Daly should have scored when a splendid Rankin cross found the captain unmarked inside the 6 yard box. Unfortunately for United he probably saw the ball too late and failed to make the right connection resulting in the ball flashing over the bar. With 5 minutes left Russell appeared to be tripped in the box but no penalty was awarded despite loud appeals. Barely a minute later the hosts were then awarded a spot kick after Mackay-Steven was clearly tripped by McGivern. It seemed borderline whether the incident was inside or outside the box, but Johnny Russell didn’t care one bit as he squared the game by slotting the penalty confidently into the corner beyond Williams - his 20th goal of the season. It was all United as the game moved towards full time but they just couldn’t secure what would have been a dramatic win and the points ended up being shared.

Following the bitter disappointment of last week's defeat by Celtic, Tuesday's win at Fir Park was just what the doctor ordered. I was looking for a response from the players and they certainly delivered. In attack we were a constant threat, but all round it was an excellent team performance.Before the game at Fir Park, I said that clean sheets will win us football matches because we have dangerous players. And in Gary Mackay-Steven, Stuart Armstrong and Johnny Russell we have fantastic talents who can create and take goals. The big difference between Tuesday and the previous Saturday was that we defended well as a team at Motherwell and not just the back four. Our midfield helped out tremendously by putting their bodies on the line and that was never better illustrated than by John Rankin taking one on the head at a free-kick late on.

It was great result for the fans as well. Motherwell are a good side with players that can hurt you, but I thought we handled them really well, even though we dropped a wee bit too deep at times, but that was just the way the game was. However, though Rado didn't have a lot of saves to make, their 'keeper was man of the match, which says it all. So it was a great result, not least for you, the fans, after what happened at Celtic Park. That was a bad defeat, but if defenders don't pick up their man - as happaned all too often ~ you're going to lose most games, never mind whan you're up against the best team in the country. That defeat didn't tell me anything about the players that I didn't know already, but nevertheless the manner of it still rankled.

The dividing line between success and failure is thin but the basic fact is we simply have to defend better than we did.The scoreline made it look like a battering but it wasn't that- we just failed to go about our business the right way in vital areas. Having gone into the match without Gavin Gunning losing Willo Flood so early on was another blow. Typically of Willo, he declared himself fit ahead of the game despite being down with flu all week, but it was soon clear that he was struggling, forcing us into a change early on. On the plus side, in attack we looked dangerous and again getting an early goal shows we are starting games in the right way. After those two tough away games we're now back at Tannadice and it's vital, particularly for the supporters, that we keep the momentum going here following the wins over Rangers and Hearts. Another quick goal got us of to a great start against Hearts, leading to a second successive home win, which can only breed confidence. That is essential as we seek to make this a difficult place for teams to visit. Hearts having a man sent off may have had an impact, but we were ahead and in control of proceedings.I thought the players handled playing against ten men very well, albeit at times we tended to overdo the passing.However, some of the passing was excellent and showed that we can play without fear, which is what i'm looking for.

Much was made in the media that Hearts had three defenders cautioned and a player sent off, all for challenges on Gary MacKay Steven. That suggests to me that Gary is being protected and that's important because not only is he a key man for us, he is exactly the kind of entertaining player that attracts the fans. He has the confidence to take men on and certainly has the ability to do so, I suspect I might also have entered the referees notebook if I had had to defend against him. Recent games show that we are creating chances and scoring goals and that's important to do as long as we defend properly, which we certainly did at Fir Park. With home advantage against Hibs this afternoon, we must ensure we capitalise on that. The league table this season is as close as I've ever known it. It seems bizarre that, although we head into todays game in eighth place, we're just four points off second! Indeed other than the top and bottom clubs, the whole of the SPL is in the mix. A lot of twists and turns between now and the end of the season is inevitable. So, the players must take the confidence from Tuesdays excellent performance into the vital challenges coming up today and over the next week with visits to Inverness in the SPL and, of course, the Scottish Cup quarter final derby.